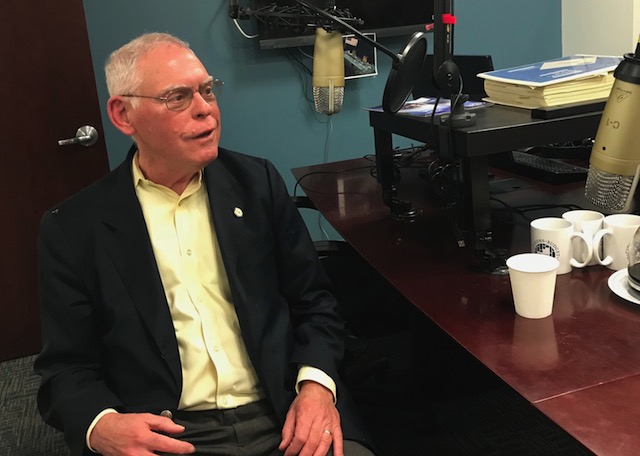 “It was a devastating defeat,” said Gerald Benjamin, wounds still fresh from a blowout he had, in his seventies, worked very hard to avoid. “The size of the defeat upset me more than the fact of the defeat,” he added, referring to the overwhelming vote against holding a New York state constitutional convention.

“I really think that this was a major missed opportunity,” Benjamin said by phone Monday, less than a week after New York voters decided 83 percent to 17 percent not to hold a convention to amend the state’s most powerful governing document. “The nature of the opportunity was misunderstood; the nature of the risk was miscalculated,” said Benjamin, from New Paltz, where he continues his work at the State University of New York, leading the Benjamin Center for Public Policy Initiatives, which was renamed after him in 2015.

The constitutional convention vote result was despite Benjamin’s best efforts, barnstorming the state giving talks and participating in debates, explaining the once-in-a-generation opportunity to truly reform state government. He’s advocated for a constitutional convention for decades, including ahead of the last every-20-years vote, in 1997, which also resulted in no gathering to debate the structures and mandates of state law.

Benjamin believes that the state constitution desperately needs modernization, the court system needs to be redesigned, and a host of changes should be made to how state government functions, including rebalancing of power between the executive and legislative branches, term limits for state legislators, and more, like home rule and campaign finance reforms.

“I did my best. I don’t feel I could’ve done anything more,” Benjamin said. “I was glad I got to vote ‘yes.’ In retrospect I felt disappointed by the margin.”

Asked if he had felt like he was voting for himself on the ballot, Benjamin laughed, and commented that the questioner appeared to be pushing him toward sentimentality. Throughout the campaign leading up to Election Day, Benjamin had regularly said that this would be the last opportunity for a convention “in my lifetime.” He’s now actively plotting his next moves toward reform.

While Benjamin and other scholars and reformers were for calling a convention, in large part to pursue changes that entrenched powers have been unwilling to consider, the opposition to a convention was an immense coalition of labor unions, civil rights and environmental groups, and others, including many on both sides of the political aisle, with a few exceptions. They vastly outspent the “yes” side, using a campaign of fear (that pensions would be stripped or natural preserves unprotected) to drive members and activists to the polls to flip over the ballot and vote “no” on proposition one.

“Those are the right were being rational,” Benjamin said, noting that Republicans are a dwindling minority in New York. “Those on the left, I don’t know.” Benjamin expressed what was a fairly common belief, that labor unions, civil rights groups, environmentalists, and allies of each were being too cynical in their opposition, that they could easily dominate a constitutional convention, which, if approved, would have taken place in 2019, with its proposals likely to be on the November 2020 ballot for voters to approve or vote down.

In 2018, there would have been delegate elections, a process some, including Governor Andrew Cuomo, pointed to as problematic, since there are no rules restricting current officeholders or their associates from running, and no campaign finance rules beyond the porous state-level ones. Cuomo had expressed support for holding a convention in the past, but that had all but vanished by the start of this year.

“I think he made the political calculation and acted in accord with it,” Benjamin said of Cuomo. “It had to do with ambition for himself and ambition for his program. And he’s good at that.I’m not condemnatory of a man making a political judgement...but I’m disappointed, it wasn’t a profile in courage. It’s indicative that the path is so narrow.”

As for the concern from Cuomo and others about the delegate election process, Benjamin said one way to negate that issue in the future is to move legislation well ahead of the next convention vote, due for 2037.

“Conversations have just started to make that happen and make some other things happen constitutionally,” Benjamin said, explaining that he is already facing the reality dealt to him on Election Day. “I’m not sitting here being discouraged,” he said.

Instead, he is talking with others about how to make changes, related to both the convention process and, perhaps more importantly, key aspects of state governance. ”I certainly will help pressure the Legislature,” Benjamin said, noting that he is not optimistic, but that not trying isn’t an option. “You can’t do anything without having a proposal...you have to have a bill, something beyond an idea. We are going to keep the conversation going in some measure.”

Reforms that would have been sought at a convention can be approached piecemeal, whether it is electoral reforms like early voting or a campaign finance system.

As for the 2017 vote that wasn’t, despite the political moment, wherein New Yorkers have little faith in state government after seeing corruption scandal after corruption scandal, Benjamin said “At the end of the day, it was a harder test than I thought it was from a political point of view.” But, he added, while “We were really outgunned, in retrospect that wasn’t really the problem.’

Benjamin cited “one structural and one operational” deficit his side faced. One on hand, he noted that with all the rights and protections that have been added to the constitution over many years, including some at constitutional conventions, ”every increment of positive rights that were added created a constituency to protect that the document wouldn’t be changed...it’s very powerful politically that aggregation of interests in favor of not opening the document.”

Second, he said, “The nature of the question doesn’t tell late-arriving people that they are talking about the state constitution.” The wording of the ballot question, which is mandated by the current constitution, does not indicate whether the convention would deal with the state or federal constitution, and people with little background knowledge may be worried that the much-revered federal constitution could be on the chopping block.

Benjamin cited the organized effort of the opposition, as well as the shifting poll numbers that helped convince many that the proposition would not pass as the vote approached, and what he called a “really problematic” and “poorly argued editorial” by The New York Times editorial board, which advocated voting “no.”

Steadfast that he’s nowhere near done seeking reform and improvement to state government structure and process, Benjamin said it’s hard to see a constitutional convention being approved in the future. “I can’t imagine the conditions that would arise, even the crisis conditions, in that case we’d address the crisis,” he said.

But, he added, “Who knows what opportunities circumstances will present.”