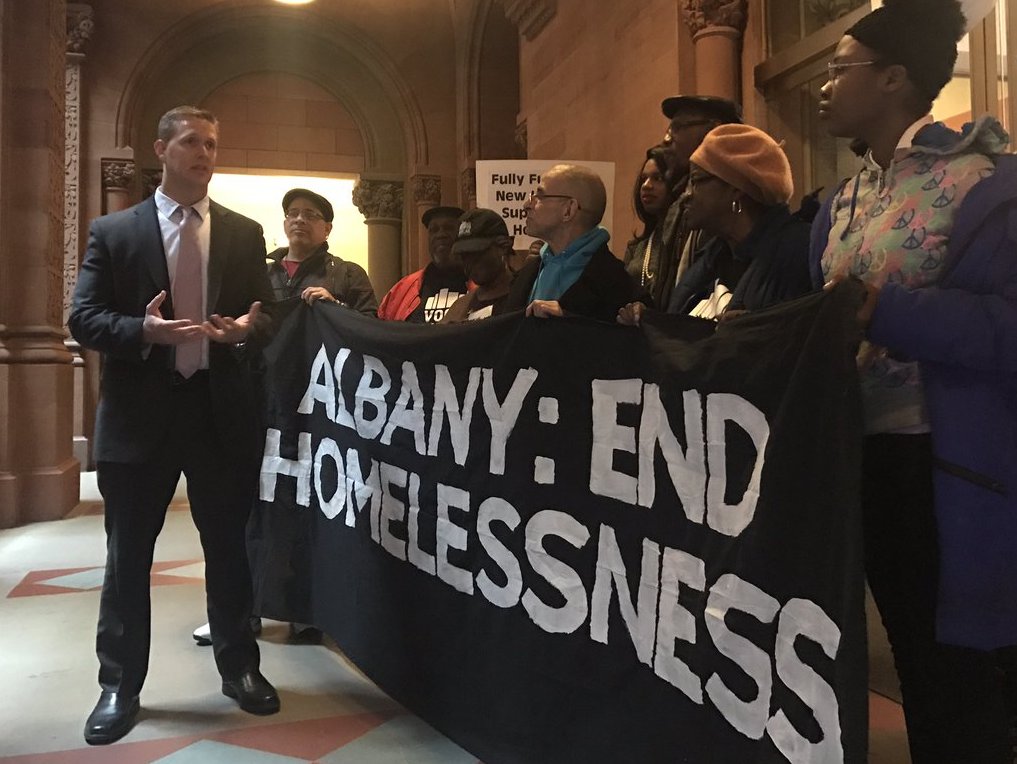 Legislation to create a statewide rental supplement to curtail the growth of homelessness in New York, while generating savings for local social service agencies, is the focus of a renewed campaign ahead of the 2018 budget and legislative session.

The bill, which would close the rental gap for low-income families and individuals who already receive housing subsidies, gained strong momentum from lawmakers and advocates at the start of the year, but disagreement over how much the program would cost ultimately derailed its inclusion in the budget that passed in early April, according to those familiar with negotiations.

Independent Democratic Conference (IDC) leader Senator Jeff Klein, of the Bronx, wrote at least two op-eds and issued a report promoting the legislation, but he and Assembly Speaker Carl Heastie failed to persuade their colleagues in the negotiating room -- Senate Majority Leader John Flanagan and Governor Andrew Cuomo -- of the program’s efficacy.

New York City Mayor Bill de Blasio endorsed the idea in public comments to state lawmakers, provided it would not be accompanied by unfunded local mandates; and the city’s four Democratic borough presidents participated in a last-minute push for its inclusion in the budget. In recent years, homelessness in the city has reached record numbers. There are about 63,000 homeless people in New York City, and thousands more around the state.

New York City Comptroller Scott Stringer, who has also endorsed the bill, produced a report evaluating the costs and benefits of the program. Noting that projecting the growth of homelessness and future eligibility for and utilization of the program is not an exact science, Stringer estimated that over a decade Hevesi’s proposed investment of $450 million a year from the state could reduce the city’s shelter population by 80 percent among families with children and 40 percent among single adults, and save the city millions of dollars.

“Assemblymember Hevesi has put forward a bold new plan that deserves your serious consideration,” Stringer testified at a joint legislative budget hearing in January. “Home Stability Support is a potential long-term solution to this crisis that could offer a real path out of the shelter system for thousands of New Yorkers and save the city millions in shelter costs.”

The subsidy would be made available to households or individuals “eligible for public assistance benefits and who are facing eviction, homelessness, or loss of housing due to domestic violence or hazardous living conditions.” Hevesi estimates that approximately 80,000 households are at-risk of homelessness, and that each year 19,000 more individuals become homeless than move to permanent housing from shelter. The program would replace all existing optional rent supplements and cover up to 85 percent of the fair market rent determined by the U.S. Department of Housing and Urban Development (HUD). Localities would have the option to further raise the supplement up to 100 percent of the fair market rent at local expense.

During budget talks, the state’s budget division produced its own estimate of what a fully utilized statewide homelessness prevention program, such as the one proposed by Hevesi, would cost and pegged it as $1 billion annually -- a figure it said the state could not afford. Citing the analysis by Stringer’s office, which, based on data from the Department of Homeless Services, predicted that only 30 percent of city residents who qualify for HSS would utilize the program, proponents of the plan soon returned to the table with a new number. By the time the proposal made it into the Assembly’s one-house budget, it had been whittled down to a $200 million investment that would be phased in over five years, or $40 million a year, essentially piloting the program.

Ultimately, state budget officials, assuming full utilization of the program, determined that the program would be too costly and rejected the proposal, according to a spokesperson for the IDC.

"Once we couldn't get it in the budget, it didn't even make sense to try," Hevesi said of the legislation, which he allowed to sit in the ways and means committee.

Klein never introduced a “same as” bill in the Senate because the financial component made it impossible to introduce outside of budget negotiations, his spokesperson said.

Housing advocates, including those who were involved in the negotiations, also expressed disappointment that the Assembly proposal didn’t make it into the state budget, which covers the current fiscal year that ends March 31, 2018.

“Every year goes by we hit new records, and sheltering homeless people costs even more,” said Shelly Nortz, deputy executive director of policy for Coalition for the Homeless, part of a coalition of social service advocates who helped devise the legislation.

Nortz said Hevesi’s bill represents a critical shift in homelessness policy towards prevention, while also resolving homelessness rapidly with adequate rent subsidies. “This will lower the demand for shelter dramatically and ultimately generate savings to offset the much lower cost of keeping people in their own homes,” said Nortz.

This winter, Hevesi says he is visiting Republican and Democratic lawmakers in their districts hoping to drum up support for the bill the old fashioned way, by highlighting how the bill could directly impact their constituents. He says the list of supporters has grown, including every member of the IDC and Senate Democratic conference and at least three Republican senators.

“This is the way they used to do it 30 years ago,” said Hevesi. “I believe that by the time the budget comes along, we will have a huge number of senators that will sign on to the legislation.” The bill is virtually guaranteed to pass through the Assembly, which is dominated by New York City Democrats, including Heastie, of the Bronx, and Hevesi, of Queens.

Cuomo, who is believed to strongly oppose Hevesi’s housing subsidy, has been criticized for failing to adequately address the city’s homelessness crisis. His 2011 decision to end the state’s $85 million share for the Advantage subsidy program led to the program’s closure and has been widely criticized as contributing to the city’s record homelessness numbers. The conditional subsidy program, which started in 2007 and was a joint city-state effort, helped people in shelters pay for permanent housing for up to two years, as long as they worked or participated in job training.

While Cuomo has historically resisted calls for a new state-funded subsidy to fight homelessness, advocates were buoyed by the governor’s 2016-17 Homelessness Action Plan, in which he committed to building 20,000 supportive housing units over 15 years. A new statewide coalition of community and advocacy organizations that formed this fall, called the Upstate Downstate Housing Alliance, is pushing for Cuomo to make housing a priority in 2018, speeding up these investments and taking other steps to address homelessness, including supporting Hevesi’s legislation.

Meanwhile, the IDC says it continues to support Home Stability Support and is looking into how to address funding concerns for the coming session.

Spokespersons for Cuomo and Flanagan, the Senate majority leader, did not respond to requests for comment about whether they would support a state homelessness-fighting subsidy program in 2018.