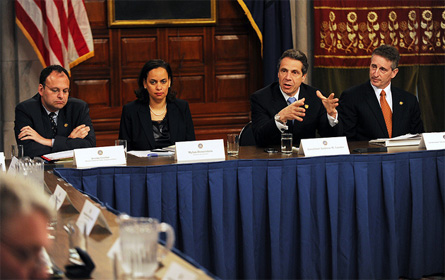 Photo courtesy of the Office of the Governor
Yesterday Gov. Andrew Cuomo announced his 'People First Tour' to rally support for his legislative agenda.

With 19 days left in the legislative session and the budget signed, sealed and delivered, Gov. Andrew Cuomo announced on Wednesday that he plans to tour the state with his cabinet to build public support for his legislative priorities. Those priorities -- a property tax cap, same- sex marriage and ethics reform--all face major hurdles in the legislature, a legislature that Cuomo can no longer sway with promises of favors and restored funds in the budget. Cuomo must now rely on the power of his popularity -- according to most opinion polls Cuomo enjoys a 70 percent approval rating among voters.

For weeks after the budget passed advocates wondered when Cuomo would take to his bully pulpit and start pushing for the legislation he spoke about during his campaign: gay marriage, an ethics bill, redistricting reform, rent law renewal and a property tax cap. On Wednesday some of those advocates were disappointed that their issues were not at the top of the list.

Some saw Cuomo's move as a sign that backroom negotiations have broken down, that Republicans in the Senate are stonewalling Cuomo on ethics and marriage equality while Assembly Democrats are blocking a tax cap. But things aren't as clear as they might seem. Cuomo insisted at the news conference on Wednesday that the tour was part of his plan all along and that he had not faced any sort of setback in the negotiations.

"From the early days of my campaign, I have said we need to bring the people back into government," Cuomo said. "That is what we did during the budget process, and we achieved historic reform. Now, we must do it again in order to keep moving forward. The people want their property taxes capped, they want Albany cleaned up through real ethics reform, and they want marriage equality. We are going to engage the people of this state to build a broad coalition behind this agenda so that these reforms are not just talked about but actually passed this session."

Despite his high poll numbers, some legislators doubt that Cuomo has the leverage he needs to force the passage of his favorite legislation. The passage of the budget removed Cuomo's main sticks and carrots; without them, they say, his hand is weakened. And they note that some politicians who had already made public promises to support some of these policy initiatives now seem loathe to back them.

Sen. Neil Breslin, deputy majority leader to the Democratic conference, said that he feels that gay marriage and ethics reform will not get any hearing in the Senate until the end of session, and at that point he isn't sure what the senators will do. But, he said, "The Senate Republicans are up against the wall." Republicans have to decide whether they should keep their promises and bring things they oppose to a vote or simply deny them a vote. Either way they will likely feel a negative impact at the polls sometime down the road.

Senate Majority Leader Dean Skelos pledged during his campaign -- and has repeated it since the Republicans won back control of the Senate last November -- that he would allow gay marriage to come to a vote and let his members vote their conscience. Skelos even said he would allow Democratic Sen. Tom Duane, the only open gay senator, to carry the bill, even though the bill would normally be carried by someone in the majority.

But so far there is no marriage equality bill in either house. The Assembly in the last few years has repeatedly passed a bill, only to see it languish or fail in the Senate. Those backing the measure may be delaying the introduction of the legislation until public pressure generated by Cuomo stirs up more support.

Even if Republicans do not simply block-vote against the measure as they did in 2009, few observers expect more than a small handful of Republicans to vote for the bill. It also remains unclear how many Democrats are on board; Sen. Ruben Diaz, a Democrat, has become the most outspoken member of legislature to oppose the measure, and Sen. Joseph Addabbo also voted against the measure early in the roll call -- a vote some credit with setting off a domino effect that led to the measure's defeat.

Eight Democrats voted "no" -- Adddabbo, Carl Kruger, Darrel Aubertine, Diaz, Shirley Huntley, Hiram Monserrate, George Onorato and Bill Stachowski. Only four of those Democrats remain in office. Addabbo and Huntley have indicated they may have changed their stance since the last vote.

It is unclear, however, whether passing gay marriage on their watch or presiding over another year of its failure will do Republicans more harm or good.

"I think they are forced to bring this to a vote," said Breslin. "They've said they will bring it to the floor, and the Democrats are much better than we were before. If they [Republicans] block-vote against it I think they will suffer negative effects in close districts."

Cuomo is counting on his coalition of gay rights groups and celebrity supporters to help push public support to a boiling point that legislators simply can't ignore. First, though, someone will have to introduce a bill.

Cuomo's ethics package would require legislators -- including tose who are lawyers -- to disclose more about their outside sources of income and empanel an independent commission to investigate ethics violations. It reportedly faces most opposition from Senate Republicans. "The Assembly and the governor have a full agreement on an ethics bill. The issue is getting the Senate on board," Assembly Speak Sheldon Silver told reporters in April. In the past, Silver, a trial lawyer, has blocked moves to have lawyers disclose outside income. Skelos also is also a trial lawyer.

Cuomo has repeatedly threatened to empanel a Moreland Commission, which would have sweeping authority to investigate corruption in the legislature, if the legislature does not pass an acceptable ethics package.

Still, there has not been much movement on the issue. Skelos continually insists to reporters, "There will be an ethics bill passed by the end of session." But Skelos has not allowed a series of Democrat-sponsored ethics bills to make their way through the legislative process. They have not been discussed in committee and are simply rotting on the vine.

To combat this, on Wednesday Democrats held an interactive public forum to discuss their bills and get the public's opinion. Good government groups testified and were cautious not to alienate the big boys at the negotiating table: Senate Republicans and Assembly Democrats. They made sure not to label anything a make or break to ethics legislation.

"We need to make sure people can trust the state legislature again," said Sen. Gustavo Rivera, who defeated the notorious Sen. Pedro Espada in the Democratic primary last year and took part in Wednesday's forum. "We need to have this discussed publicly. The Republicans made a commitment to ethics and redistricting reform."

Rivera said he wants to be able to discuss his bill, part of the package of ethics reforms the Democrats have put forward, which would increase financial and client disclosure requirements. "If they think it can be made better, let’s discuss it in public. I know they ignore us when it is useful for them," he said.

The property tax cap may not have much to do with New York City, yet legislators have tried to tie the issue to the renewal and possible strengthening of New York's rent reguations. Cuomo has said that he supports the "strongest possible" strengthening of the rent laws, but he did not make them the focus of the announcement of his tour. He has refused to name what specific measures he does or does not support when it comes to renewing and strengthening rent regulations.

Senate Republicans are opposed to strengthening rent laws and have even introduced a bill that would weaken them. Sen. Catherine Young has introduced a bill that would allow landlords to deregulate apartments much more easily than they can now. On Wednesday Sen. Liz Krueger questioned Young's motives for introducing such a bill. Young, who represents western New York, where rent regulation is not much of an issue, declined to say who lobbied her to support the legislation. Cuomo may be shying away from a full court press on the issue because he does not want to anger Senate Republicans who have greatly benefited from campaign donations from the real estate industry.

As for the tax cap, that would limit any increase in property tax rates to 2 percent per year or the rate of inflation, Senate Republicans passed Cuomo's program bill as one of their first legislative actions this year. The Assembly has not moved on the bill, and Silver says he intends to introduce his own version of a cap, with tweaks. Legislators are afraid a strict property tax cap would hurt schools and public services while still forcing localities to pay for unfunded mandates from the state.

Skelos has refused to negotiate on the cap with Silver, while Cuomo has said he prefers his own bill but would be willing to hear other ideas. Fred Dicker of the New York Post reported this week that Senate Republicans only passed Cuomo's version of the bill because they know it won't pass in the Assembly. "I think Republicans are really nervous on the tax cap," said Breslin.

Cuomo did not make redistricting reform a major feature of his initial tour announcement. The measure would take the drawing of district lines out of the hands of the legislature and create an independent body to oversee the task. As it is now the redistricting process allows the majorities in both houses of the legislature to draw up districts that lean toward their base. This helps their incumbents stay in office. Experts say that this process has kept Republicans in control of the State Senate.

Koch and his supporters said that Skelos' measure was stalling tactic. They want Cuomo to help them pressure Skelos into action by pledging to veto any district lines drawn by the old process. A veto would then leave the courts to draw up the district lines -- something that would likely also not favor the Republicans. So far, though, Skelos hasn't budged.

Cuomo has not made his stance on his independent redistricting a focus of his public outreach. When reached for comment on Cuomo's tour and the list of his priorities a spokesman for Koch's group NY Uprising noted that Cuomo did make ethics reform a major part of the unveiling of his tour.

With 19 legislative days remaining observers agree that Cuomo needs to get the wheels moving on his key legislation. Breslin, though, thinks Cuomo has time on his side -- "I think most of this legislation will be rushed through at the end of session. If it doesn't come up I think the governor will be more than happy to keep us here until these issues are resolved."