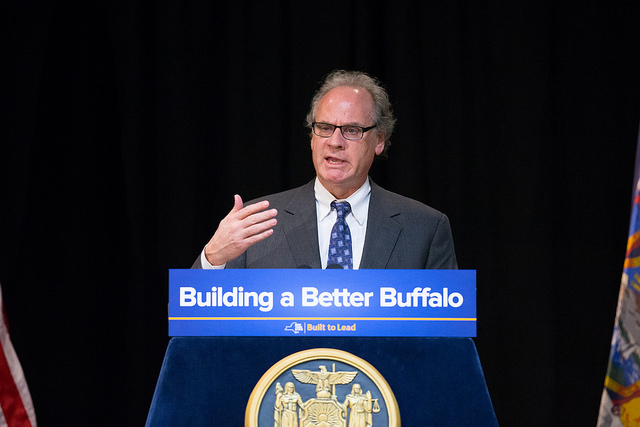 With the report due on December 31 of each year, ESD must compile the past fiscal year's “aggregate totals” for each economic development program administered by the agency, examining “program progress, program participation rates, economic impact, regional distribution, industry trends, and any other information deemed necessary by the commissioner," according to the 2017-2018 enacted budget.

The inaugural report was late.

“It will be out this week -- and that’s my fault, truthfully,” ESD president and CEO Howard Zemsky told state legislators somewhat sheepishly during the joint legislative budget hearing on economic development in Albany on January 29. He added, “I think you’ll find it to be very thorough, very forthcoming, and very extensive.”

Cuomo’s economic development czar, who is appointed by Cuomo, was queried on the report’s status by Senate Finance Chair Cathy Young, an Upstate Republican, who cited an audit by State Comptroller Tom DiNapoli that found ESD failed to meet more than half of the reporting requirements for tax credit and job creation programs that were due between April 2012 and September 2016.

“Some of them have been successful, but many of these programs have run into substantial issues, such as far lower job creation than expected…In light of these issues, ESD is often unwilling to share information with the legislature and the public on these projects,” said Young.

The annual report was released last week, on February 5, but watchdogs and experts say it falls far short of a comprehensive analysis drawing clear connections between the state’s numerous investments and job growth, and only highlights the need for a comprehensive “database of deals.”

Much of the 128-page document offers a photo-heavy, though thorough overview of the state’s “holistic” approach to transforming New York State, through business grants and tax incentives, as well as workforce development, Regional Economic Development Councils, downtown revitalization programs, and more. The latter third of the report provides a more data-centric breakdown of the economic impact of 1,153 projects overseen by ESD that received financial assistance in state fiscal year 2017 (April 1, 2016-March 31, 2017).

“This report highlights all of these strategies throughout and also includes a section of detailed statistical information. Extensive additional information on thousands of economic development projects throughout the state is available on our website,” writes Zemsky in his opening message. “Our strategy is not only providing positive economic results in the short term but also planting seeds for sustainable economic prosperity over the long term.”

The investments are broken down into four categories: tax expenditure programs -- which includes the Excelsior jobs program, the entertainment tax credit and Start-Up NY -- loans and grants, marketing and advertising, and innovation. In total, $1.8 billion was provided by ESD in support of these projects, which are expected to leverage nearly $18.6 billion in business and partner investments. According to the report, 162 projects have direct job commitments that leverage $14 billion and require the creation and retention of over 65,000 jobs in New York, for an average cost of $13,205 per job.

Among watchdogs who reviewed the ESD report, the primary criticisms are that it lacks recipient-level data, it at times only shows “net new job commitments” instead of actual jobs created, and has inconsistent definitions for what constitutes a job.

Recipient-level data, which shows return on investment from individual projects, is crucial for determining any program’s true cost-per-job, according to David Friedfel, director of state studies for Citizens Budget Commission (CBC).

“Taxpayers should know if individual projects are receiving benefits under multiple programs, the total amount of state and local spending, the number of jobs promised and created, and the amount of capital expense committed and expended by the company,” said Friedfel in an email, noting that such information could be made available with the creation of an online “database of deals,” a key recommendation repeatedly pushed by CBC and other fiscal watchdogs and government reform groups.

A spokesperson for ESD pointed out the statute specifically requires the agency to provide “aggregate totals” for the programs and noted that report provides links to quarterly reports offering more granular details.

The report should also show actual jobs created, not just commitments under the Excelsior jobs program, something the database of deals would document in real time, according to Friedfel, since companies often commit to creating a certain number of jobs, and then the project either fails to come to fruition, or the actual number of jobs created falls short of expectations. At times, more jobs are created than originally expected.

“The committed jobs are just the goals, the report should have actuals,” said Friedfel. “Also, the difference between commitments and actual job creation is the reason why economic development spending should be pay-for-performance, with companies being reimbursed after job creation goals are met.”

While much of the report’s tax credit data does a better job of presenting actual job creation numbers, critics say the figures are still misleading because the term “job” is defined differently throughout.

In part due to the broad scope of the report, jobs for different types of economic development programs are counted using different sets of criteria. In an attempt to preempt this criticism, the report classifies jobs associated with the entertainment industry tax credit as “hires” rather than “jobs” because these are typically short-term gigs that are counted regardless of how long the employees work. The cost-per-job for these roles is considerably lower than more permanent, full-time positions produced by other programs. The state’s controversial film and television tax credit has benefited 289 projects, resulting in $2.9 billion in private investment and a cost-per-hire of $2,841.

Another anomaly is Start-Up NY, which, due to the particulars of its tax requirements, only counts employees that are full-time and permanent for at least six months -- a threshold that should probably be applied for all job counts, some critics say.  In 2016, businesses in the Start-Up NY program reported business tax benefits of $949,868 and reported their employees received $3 million in personal income tax benefits, which brings the state investment to a $3.9 million total, according to the report. The businesses also report investing over $31 million and creating a total of 1,135 new jobs, of which 722 were "net new jobs," or jobs that lasted longer than six months. The ESD report omits a cost-per-job breakdown for Start-Up NY, perhaps because the 2017 data is unavailable yet, but it notes that 67 businesses were approved in 2017, projecting the creation of 1,000 jobs and $28 million in investment. Based on 2016 jobs numbers provided, the cost was $5,470 per net new job.

The program has been the source of significant criticism of those who point to weak job creation, including, most recently, Senate Majority Leader John Flanagan, who called for an end to the program on Tuesday. (Ongoing questions about the effectiveness of Governor Cuomo’s job creation efforts also come as elements of his economic development programs are at play in twin corruption trials happening this year, where Cuomo associates and donors are accused of bid-rigging and bribery.)

Critics argue that the same job-counting criteria should be applied across the board and question whether jobs created by companies benefiting from more than one public subsidy have been counted twice.

"The charts and data in the report are in different formats and don't allow for apples to apples comparisons of different subsidy programs,” said John Kaehny, executive director of Reinvent Albany, a leading advocate for the database of deals. “There is no baseline data showing existing jobs or growth rates for regions. What's striking about the report is how little actual data there is that sheds light on performance by region, program or recipient."

Many long-time critics of the state’s economic development programs are not likely to be appeased by the numbers regardless of how they are presented. E.J. McMahon, research director of the Empire Center for Public Policy, calls himself “close to atheistic ” on the field of taxpayer-funded economic development.

“Part of the problem is distinguishing between what incentive claims to have delivered and what would have happened anyway without the incentive,” said McMahon, who frequently rails against the state’s entertainment tax credit, which disproportionately benefits economically-thriving New York City.

The credit grants tax reimbursements of up to 30 percent for production companies that film in New York City or its suburbs. Farther upstate, the entertainment incentive grows to 40 percent. The number of entertainment ventures filmed in the city has ballooned in recent years, but naysayers note that New York City has always been a coveted filming location for the movie and television industry.

“The people who are fans of the film credit have consistently pretended for years that no one would have been making films in New York City without the tax credit. All it proves is if you pay someone to do something, they will do it,” said McMahon.

Getting lost in the conversation is what economists call “opportunity costs,” which is “what we didn't do because we gave you the money," according McMahon. "The true cost of filming ‘Blue Bloods’ in Queens is not that we gave them $25 million, it’s what could the State of New York have spent that $25 million on? What kind of mental health services could you have provided to people on the street for $25 million? What’s the societal value of that over having Tom Selleck walking around Queens?”

A spokesperson for Comptroller DiNapoli’s office declined to comment on the ESD report, stating that the agency currently has an audit of ESD underway. Senator Young was unavailable for comment due to all-day budget hearings Monday and Tuesday, a spokesperson said.

Correction: An earlier version of this article miscalculated the cost per job for Start-Up NY. The article has been amended to reflect this correction.