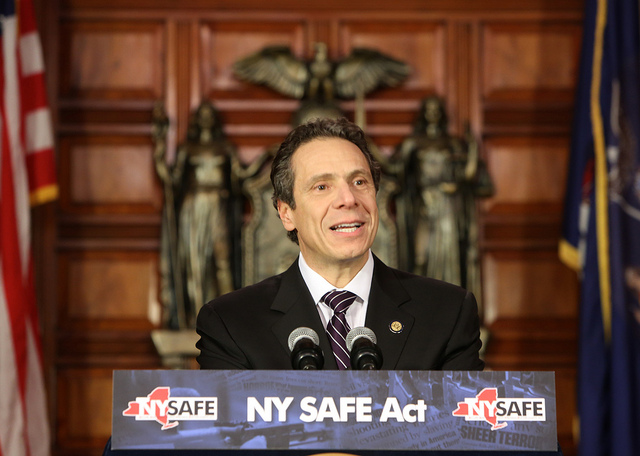 Governor Andrew Cuomo sharply critiqued his counterpart from Florida, Rick Scott, on CNN on Friday, criticizing Scott’s Action Plan on gun safety in the wake of the massacre at Marjory Stoneman Douglas High School as “incremental” and unlikely to have a real impact. Cuomo, a second-term Democrat, is known for his landmark 2013 gun control law, the SAFE Act, which he pushed through after the mass killing of children and teachers at Sandy Hook Elementary School in Connecticut in late 2012, and has been vocal on the need for reforms across the country.

After receiving heavy criticism over his state’s lax gun laws in the wake of the killing of 17 at the school, Scott, a Republican, issued his new plan, which includes provisions such as banning bump stocks, raising the minimum age to buy a firearm to 21, restrictions and prohibitions on firearms purchases for mentally ill people and domestic abusers, and more funding for school safety and mental health treatment.

Cuomo, in an interview with CNN’s Jake Tapper, said the proposals, which Tapper thought Cuomo would approve of, dance around the issue. Cuomo indicated Scott was stopping short of implementing more meaningful measures to prevent gun violence, such as universal background checks, more stringent prevention of mentally ill people from acquiring weapons, better information sharing and a red-flag warning system, and, perhaps most significantly, a ban on certain assault weapons, which he defines as having “military style” accessories such as large clip sizes, and certain grips and scopes.

In doing so, Cuomo appeared to outline his set of proposals for national gun reform, though he did not give Scott credit for the reform measures outlined by the Florida governor, some of which would make for tighter controls than exist in New York.

Cuomo criticized a proposal floated by Republicans, including President Donald Trump, and the National Rifle Association, to arm teachers to protect against mass shooters.

Two of the main areas where Cuomo criticized the Scott proposal are areas where New York would actually be behind Florida if Scott’s proposal becomes law: New York does not require a buyer of rifles or shotguns to be 21, and bump stocks can be acquired legally in the state.

The Florida proposal -- which is still a long way from passage -- would prohibit any person under the age of 21, with the exception of military and law enforcement officers, from possessing any firearm. In New York, only handguns are prohibited for those under 21; 18 year olds can purchase rifles or shotguns.

Raising the age for firearm purchases appears to be one of the few gun control proposals gaining widespread steam among Republicans. In New York, the proposal has been endorsed by Congressional Rep. John Faso, a Republican who represents several rural upstate counties.

A spokesperson for Governor Cuomo told Gotham Gazette that raising the age for purchases would not be effective. The spokesperson cited the shootings in Virginia Tech, Tucson, Aurora, San Bernardino, Las Vegas, and Sutherland Springs, all of which were committed by an individual over the age of 21.

“The [Florida] proposals do not go far enough,” said the spokesperson. “The 21 age limit in particular is barely scratching the surface, New York has already banned affixing bump stocks to guns and the $500 million fund would allow them to put police officers in schools, which the governor does not support. They are incremental steps and more needs to be done.”

Governor Scott’s office declined to respond to Cuomo’s comments, instead directing Gotham Gazette to the press release with Scott’s proposals.

On CNN, Cuomo, who is known for and boasts about being able to craft compromise with a Republican State Senate, said that gun control was too serious an issue to be constrained by the "trap" of thinking within considerations of political feasability.

It is illegal in New York State to affix a gun with a bump stock, an instrument that can turn a semiautomatic rifle into an automatic rifle, owing to the state’s and the federal bans on machine guns. But bump stocks can still be purchased separately, and be illegally affixed to the weapon.

The SAFE Act articulates stricter terms for assault weapons prohibitions and universal background checks, but the Florida proposal places more emphasis on school security than seen in New York. Not all schools in New York are equipped with a School Resource Officer, while Scott has called for an SRO in every school, and proposed funding for one officer per 1,000 students across the state, to be enacted next school year.

While the SAFE Act banned new sales of assault-style weapons, it allowed already-existing such guns to remain lawfully owned, as long as their owners register them. There are roughly 44,000 registered assault-style weapons in New York, Cuomo has said repeatedly of late, including on CNN, where he also said the country should institute a ban while carefully defining “assault weapon.”

Cuomo has also indicated that gun violence has decreased significantly in New York since the SAFE Act was passed. However, not all parts of the SAFE Act have been fully implemented. The database tracking ammunition sales like gun sales has still not been created. Cuomo and Senate Republicans agreed to suspend the development of the database in 2015, and the Senate has still not agreed to fund the measure, leaving it unenforced despite its codification in law.