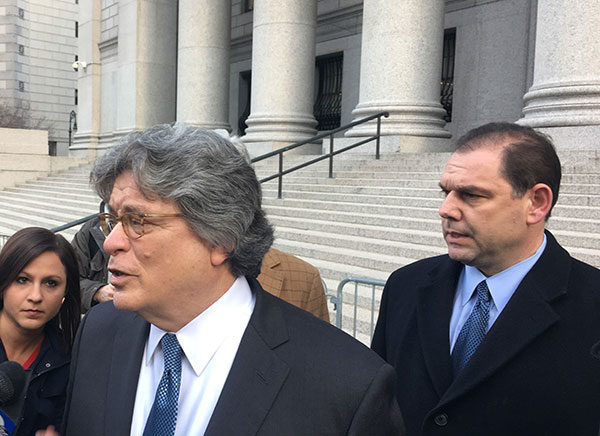 The jury in the federal corruption trial of Joseph Percoco, a former top aide to Governor Andrew Cuomo, returned with a verdict on Tuesday, finding Percoco guilty of two counts of conspiracy to commit honest services wire fraud and one count of soliciting bribes, charges related to a pair of bribery and bid-rigging schemes involving firms seeking to do business with the state. Percoco was also found not guilty on three charges he was facing.

Over the course of more than seven weeks, the Percoco trial laid bare the inner workings of the state government and the lax regulations around government ethics and election financing. Prosecutors also touched on the functioning of the executive chamber, though no allegations of illegal wrongdoing were brought against Governor Andrew Cuomo, who once referred to his longtime friend Percoco as his father’s “third son.”

After closing arguments last week, the jury deliberated for eight days -- and deadlocked twice -- before coming to a mixed verdict. In total, there were ten felony counts against Percoco and three co-defendants, upstate business executives who allegedly paid Percoco more than $300,000 for his help in getting favorable treatment from the state government. Former lobbyist Todd Howe, the government’s star witness in the case, pleaded guilty to facilitating the bribes to Percoco along with seven other felony counts related to the schemes.

One of the bribery schemes involved the real estate developer COR Development and its executives, Joseph Gerardi and Steven Aiello, who were accused of bribing Percoco for assistance with labor unions on a real estate project as well as to obtain a raise for Aiello’s son. Both men faced charges of conspiracy to commit honest services wire fraud, paying bribes to Peroco and making false statements to federal investigators. Although Gerardi was found not guilty of all three charges, Aiello was found guilty on the conspiracy charge.

The jury also deadlocked on two charges against Peter Galbraith Kelly, an executive from Competitive Power Ventures, an energy firm that was at the center of the second bribery scheme. Prosecutors alleged that Kelly organized a “low-show” job paying $90,000 a year for Percoco’s wife, which they said were actually bribes for Percoco. The jury’s decision led federal district judge Valerie Caproni to declare a mistrial for Kelly.

Percoco himself was found not guilty on the three charges, including extortion under the color of official right, conspiracy to commit extortion under the color of official right, and soliciting bribes related to the COR scheme. He could face 50 years in prison on the three charges on which he was found guilty. Percoco’s sentencing is set for June 11; he and his lawyer said outside the courthouse that they would explore their legal options, including “what we might do in terms of making motions and pursuing our appellate rights.”

At trial, prosecutors painted a picture of Percoco as the governor’s right-hand man, who could move mountains with a single phone call and who often bullied others in state government to do his bidding. The defense, however, sought to portray him as simply an “advance man” who managed events, scheduling, and day-to-day minutiae for the governor. The case was further complicated by the testimony of Howe, who was arrested midway through the trial after admitting to violating his cooperation agreement with the government. Although prosecutors, in their closing arguments, sought to downplay Howe’s role in the case, defense attorneys leaned heavily into the idea that Howe was a manipulative operator who was framing their clients for his own misdeeds.

“Joseph Percoco was found guilty of taking over $300,000 in cash bribes by selling something priceless that was not his to sell – the sacred obligation to honestly and faithfully serve the citizens of New York,” said Manhattan U.S. Attorney Geoffrey Berman, in a statement after the verdict was announced. Berman said Percoco “corruptly chose to disregard” the fact that “government officials who sell their influence to select insiders violate the basic tenets of a democracy.”

Speaking with reporters outside the courthouse, Percoco said he was “disappointed” with the verdict, but betrayed little emotion as he said he would consider the options with his lawyers. “I am thankful to my wonderful legal team and I‘m thankful to my family and friends that have stood by me throughout this entire process and I look forward to them all standing by me as we go forward,” he said.

Barry Bohrer, Percoco’s defense attorney, questioned the jury’s divided verdict. “There is an inconsistency in the verdict as we read it,” he conceded, when asked by a reporter, “and we are...gonna review and figure out what it means and what options are open to us and we will pursue all available options.”

Asked if his client was a “victim of politics,” Bohrer declined comment, but said, “Look, it was a difficult time and place to be trying a case involving Albany politics, there’s no question about that. We think that it was a much closer case than some were led to believe and I think the jury’s verdict is a reflection of that and so we are going to look at any and all options going forward in terms of pursuing further review.”

A coalition of government reform groups called on the state Legislature and governor to pass reforms to prevent such corruption in the future. “Percoco’s trial spotlighted a state government riddled with pay to play, influence peddling and unethical behavior,” they said in a statement.

The groups -- Citizens Union, Common Cause/NY, League of Women Voters, NYPIRG, and Reinvent Albany -- are calling for strict limits on campaign contributions from entities seeking state contracts; restrictions on outside income for state legislators and those in the executive branch; and closure of the so-called LLC loophole which allows limited liability companies with hidden donors to contribute large sums of money to state candidates. They are also pushing for greater accountability and transparency within the state budget, contracting, and more teeth for state ethics watchdogs and agencies with oversight of state economic development spending.

Cuomo’s critics and opponents, including two Republican candidates for governor this year, pointed fingers at the Democratic incumbent for enabling a culture of corruption and called for an investigation into Cuomo allowing Percoco to use a government office while he was running the governor’s 2014 reelection campaign.

The governor responded to the verdict In a statement put out Tuesday afternoon:

"The jury has reached a verdict and I respect that decision. While I am sad for Joe Percoco's young daughters who will have to deal with this pain, I echo the message of the verdict - there is no tolerance for any violation of the public trust.

"There is no higher calling than public service and integrity is paramount - principles that have guided my work during the last 40 years.

"The verdict demonstrated that these ideals have been violated by someone I knew for a long time. That is personally painful; however, we must learn from what happened and put additional safeguards in place to secure the public trust. Anything less is unacceptable."