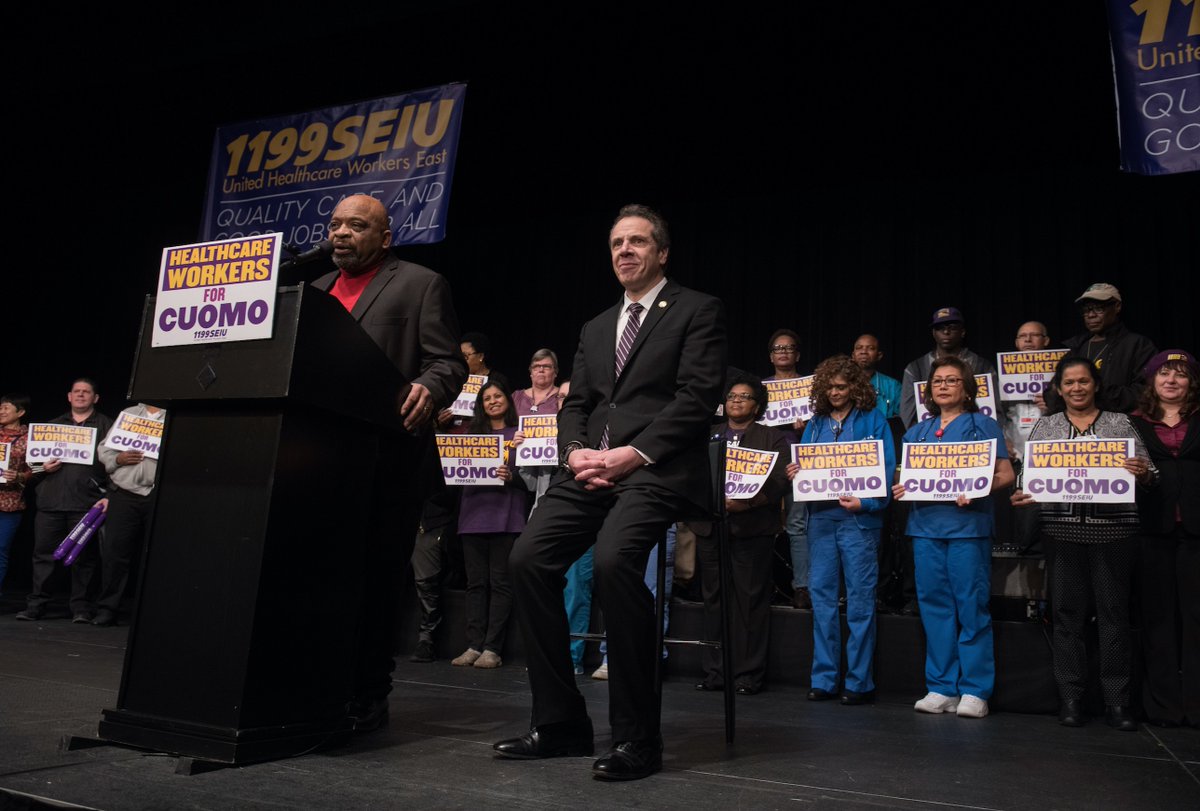 Governor Andrew Cuomo’s campaign website has been updated with a 2018 logo but was touting dozens of endorsements that the governor received in the 2014 election cycle, with no indication that the backing of the groups listed did not apply to the current election, in which the Democrat is seeking a third term.

The Cuomo campaign took down its endorsement page, which said “endorsements updated daily,” on Thursday after Gotham Gazette inquired about it. Shortly after an email to a campaign spokesperson, sent after several calls to organizations listed, the campaign endorsements page began redirecting to the home page. 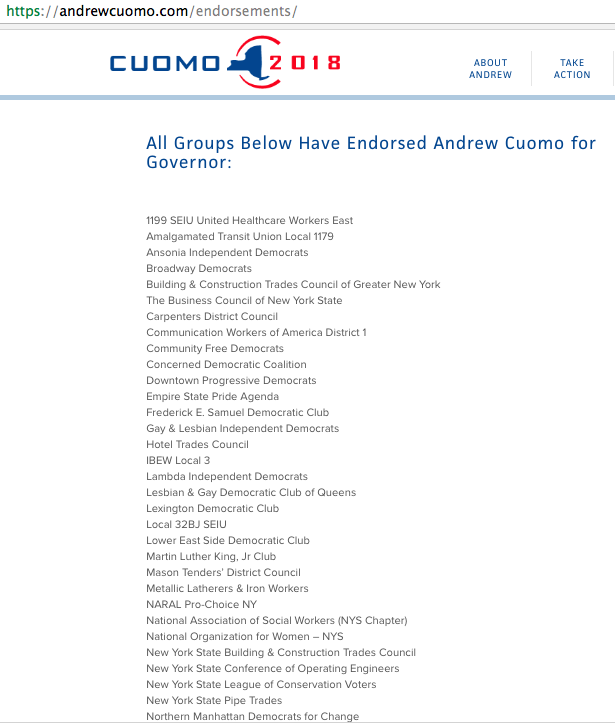 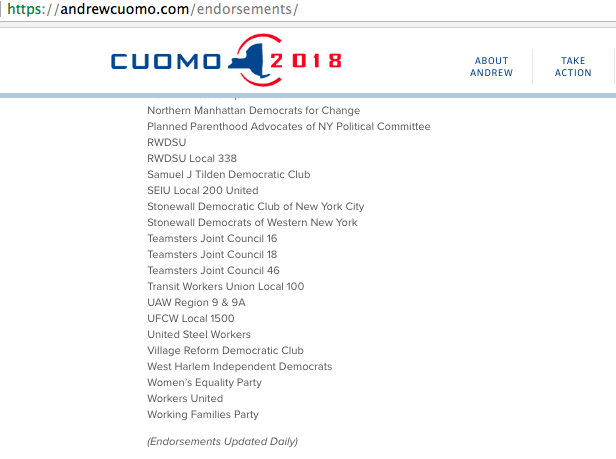 Until Thursday afternoon, the governor’s campaign website touted 51 endorsements, from prominent labor unions, Democratic clubs, progressive advocacy groups, and political parties like the Women’s Equality Party and the Working Families Party. But at this point, almost all of the endorsements only apply to the governor’s last election in 2014 -- most of the groups have yet to make a choice of candidate this year. A few have already backed Cuomo again this year, when he is facing actor and activist Cynthia Nixon in the Democratic primary, while a few Republicans are vying for their party’s nomination, and smaller party candidates are likely to emerge soon.

“That is not accurate,” said Dom Leon-Davis, a spokesperson for the Working Families Party, about its endorsement being listed on the website. “We have not endorsed this year. Our 232-member state committee has an important decision to make in the coming months and people should stay tuned.”

The WFP backed Cuomo in 2014, in a deal brokered by Mayor Bill de Blasio, after the governor agreed to push progressive priorities, including through support for a Democratic majority in the state Senate. Cuomo failed to follow through on some of those promises, prompting wariness and criticism by WFP members and scorn from de Blasio, while the governor also created the Women’s Equality Party (WEP) in a thinly-veiled attempt to undercut the WFP.

Though Cuomo has generally tacked to the left in his second term, after governing as more of a centrist Democrat, the political winds in the state have shifted dramatically since 2016. The election of President Donald Trump enraged progressive activists who on a local level are targeting the Republican-controlled state Senate, which they see as the largest roadblock to major progressive legislation being passed in the state. The Republicans are propped up by the Independent Democratic Conference -- eight breakaway Democrats who share power in the Senate -- and by Senator Simcha Felder, a nominal Democrat who caucuses with the GOP. Cuomo, who has in some ways benefited from (and some say propped up) that Senate structure, has increasingly become the target of progressive advocates’ ire.

Nixon’s entrance into the race earlier this week has added a dramatic new element to the gubernatorial race, apparently pushing Cuomo to quickly pursue several endorsements as she runs to the governor’s left and could pull support from groups that have traditionally supported him.

The governor does already have a few prominent backers for his third-term bid. In January, the Retail, Wholesale and Department Store Union became the first labor union to endorse the governor for a third term. “At a time when we have serious concerns about what is going on in Washington, DC, Governor Cuomo has proven that you can govern effectively, and advance progressive change in a unifying manner,” said RWDSU President Stuart Appelbaum, in a statement at the time, touting Cuomo’s progressive accomplishments including the passage of the state’s marriage equality bill, paid family leave, and a $15 minimum wage, among other things.

The large and powerful health care workers union, 1199 SEIU, has also backed Cuomo. And, last week, the National Organization for Women-New York also came out in support for Cuomo and, just Tuesday, U.S. Senator Kirsten Gillibrand of New York also endorsed him, as reported by The Daily News.

There are groups on the 2014 list that is now gone from Cuomo’s website that can be expected to endorse the governor, even if they haven’t already. Bob Master, assistant to the vice president of Communications Workers of America District 1, said the Cuomo campaign was clearly using an outdated list and that his organization’s endorsement wouldn’t be announced for another few weeks. “We have a process to go through,” he said in a brief phone interview, “but I’m quite confident we’ll be sticking with the governor.”