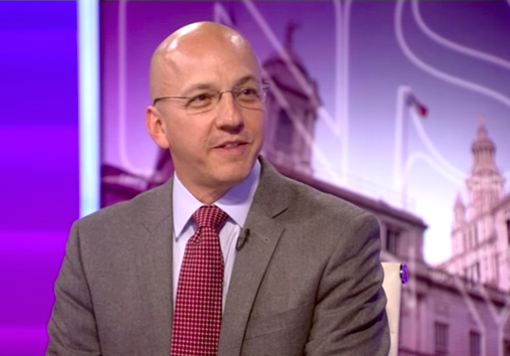 In challenging Governor Andrew Cuomo in the Democratic primary this year, actor and activist Cynthia Nixon faces tough roadblocks ahead, not the least of which is that the New York State Democratic Party is seemingly throwing its weight and resources behind the incumbent. That has led many left-leaning activists and Nixon allies to cry foul and question why the state party, short of an outright endorsement, would choose sides so far ahead of the party primary.

In an interview last week on NY1’s Inside City Hall, Geoff Berman, the executive director of the New York State Democratic Party, suggested that a contested primary would be counter-productive for the party.

“[M]y mission is to elect Democrats to office, so my focus in this important election year is on maintaining the Democratic seats that we do have, and increasing them by flipping red seats to blue,” Berman said, when asked by host Errol Louis about the apparent conflict between centrist Democrats who control the party and more left-leaning party members. Berman emphasized that the party’s priorities are to elect New York Democrats to the U.S. House of Representatives and to the State Senate, both legislative bodies under GOP control.

“I certainly believe that we have a strong, progressive governor in office already, who has already signed a slew of progressive legislation over his time in office,” Berman continued, when Louis noted that Cuomo, who appointed Berman, is also running for reelection and being challenged. Pointing to a number of Cuomo’s accomplishments -- including the passage of marriage equality, a $15 minimum wage phase-in for most of the state, and paid family leave -- Berman said, “We have that governor in place and it would be a waste, I think, of time and energy to focus on an intra-party battle when there’s so much opportunity...I don’t think we need to worry about a new governor, we have a strong governor.”

Naturally, that didn’t sit well with those tired of Cuomo and his unfulfilled promises on various progressive causes, including to help flip the state Senate, and who are hoping to see a competitive primary battle between the two-term incumbent and Nixon, the insurgent.

Among those decrying Berman’s approach is Zephyr Teachout, the Fordham law professor who challenged Cuomo in the 2014 primary and received a surprising 34 percent of the vote with comparatively little name recognition or campaign funds. Teachout has joined Nixon’s upstart campaign as treasurer

“Theres a primary, state party shouldnt take sides,” Teachout tweeted [sic] on Tuesday, a day ahead of Berman’s appearance on NY1. Teachout then had sharp words for Berman’s comments during the interview, all continuing a line of criticism she and others have been leveling as the state party has recently increased its activity, often in support of or in conjunction with Cuomo.

Berman has continued to maintain that the state party has no obligation, at least under its own bylaws, to remain neutral in the primary, though it would conduct a fair nominating process at the party’s convention in late May. The party-backed nominee is chosen through a weighted vote of more than 300 Party Committee members representing Assembly districts, with the weight depending on the number of voters from each district that voted on the Democratic line in the previous gubernatorial election. A candidate who is not the endorsed nominee can also petition to get on the ballot if they collect enough signatures.

When Teachout said the party should take no sides in the primary, Berman responded on social media, “Wrong actually. There is no neutrality rule and customarily parties support their incumbents. And: Who is “the party?” The voters who decide our nominee on Election Day? Members of the party committee like @ZephyrTeachout (non-neutral) who vote to endorse a candidate at our mtg?” As he noted, Teachout is indeed an elected member of the state party and will have a vote on the party’s eventual endorsement.

Reached by phone, Berman sought to set the record straight. “I think there’s a lot of misinformation being spread there on Twitter. I don’t know if that’s on purpose or just because people don’t know because, first of all, there’s the question of what do people even mean when they say ‘the party, the Democratic party.’”

Berman drew a line between the party at large -- composed of every registered Democratic voter who can vote in the primary for the candidate of their choice -- and the State Democratic Party Committee, which is made up of elected district leaders and is not necessarily a neutral entity. “People declare who they want to represent the party and the person who gets 50 percent or more votes is the person that the party endorses,” he said, of the nominating process at the party’s convention. “The party’s never neutral. And that process happens months before the primary.”

Berman, who will not personally have a vote in the state party’s endorsement of a Democratic nominee, insisted that his job is simply to ensure that Democrats are elected, and reelected, to office. “And since we already have a Democrat elected to the office of governor who’s running again and has a progressive agenda and a progressive record, my focus is on turning seats that are held by Republicans in to Democrat seats...Anything else, for me, is a distraction and not a good use of party energy and resources.”

For a progressive activist base that has been hitting the streets since the 2016 presidential election, Berman’s recent comments are simply confirmation of their long-running criticisms of the governor and his stranglehold on the state’s Democratic machinery.

“This sums up everything that is wrong with the Democratic Party and its corporate sycophants,” wrote another Twitter user, Robert Margolist.

Even before Berman seemed to declare that the state party would rally behind Cuomo, questions were raised about the party acting as an extension of the Cuomo campaign.

There was an expensive ad blitz launched last month by the state party touting the 2013 passage of the SAFE Act, the governor’s signature gun control bill. Though Berman claimed that the ad campaign was intended to target Republicans running for reelection in the state, critics, including Teachout, said it seemed intended more as a boost to Cuomo just a week after news reports that Nixon was about to jump into the race.

Also, between March 7 and 27, Cuomo signed his name to at least six email blasts from the State Democratic Party on topics including gun control and the NRA, sexual assault and the #MeToo movement, and early voting. When New York Times reporter Shane Goldmacher pointed that out on Twitter, Teachout posed the question, “Executive Director @geoffberman, do we have your word that you are not consulting Cuomo's reelection campaign when deciding what emails to send?” The tweet prompted portions of the ongoing debate about coordination and neutrality.

Notably, both the State Democratic Party and Cuomo’s campaign have retained the services of Metropolitan Public Strategies, a prominent Democratic consulting firm.

Nixon already faces a massive uphill battle, competing against an incumbent with $30 million in his campaign coffers, far greater name recognition, and strong support from labor unions. Yet, many Democratic elected officials have been hesitant to endorse Cuomo in the early going of the campaign and it is yet to be seen how much grassroots support for Nixon emerges among Democrats.