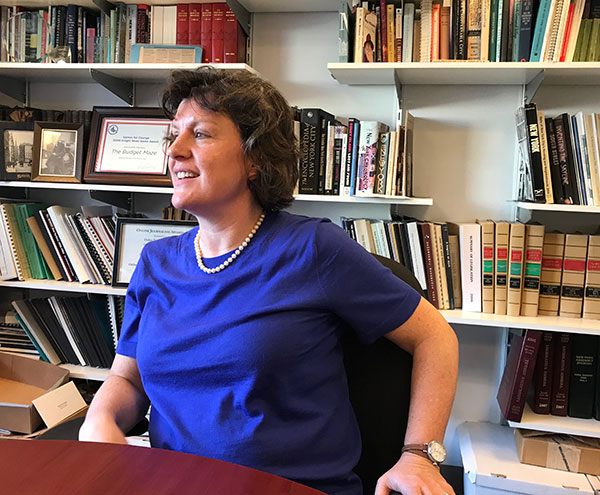 She describes herself as a “romantic about government,” but former Syracuse Mayor Stephanie Miner sees a lot wrong with how it is currently being practiced in New York.

“When I think about what motivates me to be in government, it’s making change and impacting public policy,” Miner said on a recent episode of the Max & Murphy podcast from Gotham Gazette and City Limits, adding her contention that “real people are suffering” because of poor public policy in transit, affordable housing, and infrastructure across the state.

Miner, a Democrat who was term-limited out of office as mayor of the state’s fifth biggest city at the end of last year, has for months explored the possibility of challenging Governor Andrew Cuomo in this year’s gubernatorial primary election. She spent the first semester of the year teaching at NYU’s Wagner School and meeting with people about her political future. Her resume also includes the fact that she was the first woman to be elected mayor of Syracuse and her time as the chair of the state Democratic Party, a position she earned in part because of support from Cuomo, who she subsequently had a major falling out with.

Time out of office has allowed her to “take a breath and look at where we are in our state and where we are in our country in terms of politics and government,” she said on the podcast. In the meantime, Miner is not mincing words about Cuomo and his leadership of the state.

“For me backroom dealings and politics as usual is not serving anybody,” she said on the podcast. “We have rampant corruption, everywhere we look in the state there are more and more news stories about trials, guilty pleas, guilty verdicts, more investigations, FBI’s executing search warrants, and yet you have the power establishment just being silent.”

She specifically referenced corruption scandals including the recent conviction of Cuomo’s former top aide Joseph Percoco, who was found guilty on multiple federal corruption charges in March, as well as the “Buffalo Billion” saga in which federal prosecutors allege a handful of people involved in Cuomo’s economic development project are guilty of bid-rigging. Some of those accused, including another former top aide and several major donors to Cuomo, are set to stand trial beginning in June.

She criticized Cuomo for saying he would be interviewing potential attorney general candidates in the aftermath of Eric Schneiderman’s resignation after allegations he physically assaulted four women, in an apparent effort to help decide who would become the Democratic nominee. “When you have Cuomo saying he’s going to quote, “interview candidates” for the attorney general vacancy spot, I think that is wrong and violates a bunch of standards in ethical practice…and that’s where we find ourselves in this state,” she said.

The mentality of officials, Miner said, with clear reference to Cuomo, is too often to “get the quick win, stand up and take credit for it and don’t think about what’s behind it because you’re not going to be around when everything falls apart.”

What’s really at the heart of the issue?

“I think elected officials are more interested in serving the needs and desires of vested special interests who give big campaign contributions,” Miner said. “It becomes very transactional and...as the number of people who actually vote grows smaller and smaller, it becomes this perfect cycle for elected officials: They are much more interested in getting reelected than they are at solving problems and getting reelected is much easier if you can raise a million dollars and you only have 2,000 voters who show up.”

Other problems she said are at the top of the list for the state include transit, income inequality, affordable housing, and failed economic development projects. She is also concerned for the future of jobs with the rise of technology replacing people in industries such as transport and hospitality.

Solving these problems is especially difficult in a “brittle” system that discourages a considered and forward-thinking discussion of issues, Miner said. “It’s not helpful to say there are only two sides…For example, I’m in favor of the $15 minimum wage but the fact that becomes like a buzz question, ‘where are you on minimum wage?’ it ignores this huge public policy challenge about automation and what that’s going to do to our economy. Whether or not you’re earning a $15 wage, it’s not going to matter if you can’t get a job.”

As for solutions, Miner wants to see both campaign finance and election reform, in order to remove the influence of big donors and give more access to the process to all New Yorkers. She wants to see closure of the infamous LLC loophole and changes such as early voting, automatic registration, and vote by mail.

But there’s a fundamental change in leadership need, she said -- New York needs people in power who are collaborative, who listen, who consider alternative viewpoints.

Miner said her professional relationship with the governor has been marred by conflict, with a key turning point being Miner’s 2013 op-ed in The New York Times, in which she criticized Cuomo for his plan to allow municipalities to reduce their current pension payments and make up for it in the future. She said she wrote the op-ed after being given the “runaround” and pressured by the party to “get onboard” with the Cuomo plan, despite believing the move was fiscally irresponsible, especially given municipal finance is a top issue for her.

“It became clear to me after that, that the governor and I had very different views on public policy and public policy disagreements. You’re always going to know why I disagree with you, and what those grounds are, and that was not something that was tolerated in Andrew Cuomo’s world,” she said.

The former Syracuse mayor will have to decide soon whether or not to enter the gubernatorial race, and she said during the May 15 podcast taping that part of that consideration involves the ideas she has, the team she will be able to put together, and her positioning to deliver positive change to the state.

“There are lots of different things that I find myself in a very good position to talk about,” she said, listing examples such as being mayor of a city facing significant poverty and income inequality and having her area be central to the corruption scandals plaguing the Cuomo administration.

Miner disagreed with the notion that it is basically too late to get into the race given that actor and activist Cynthia Nixon has already declared a challenge to Cuomo from the left and swooped up a number of endorsements.

Nixon’s presence in the raise is “beneficial for everyone,” Miner said, as it contributes to a “vibrant political dialogue.” But with less than four months until the September primaries, the clock is certainly ticking for Miner. Cuomo was just backed with 95 percent of the state committee vote at the party’s convention. In a brief email exchange on Monday, May 28, Miner indicated that nothing had materially changed in her thinking since the podcast discussion.

“The old rules of dates and times an how you put together a campaign no longer apply,” she said. “We are in uncharted waters and it is a tremendously turbulent time. People are hungry for change.”