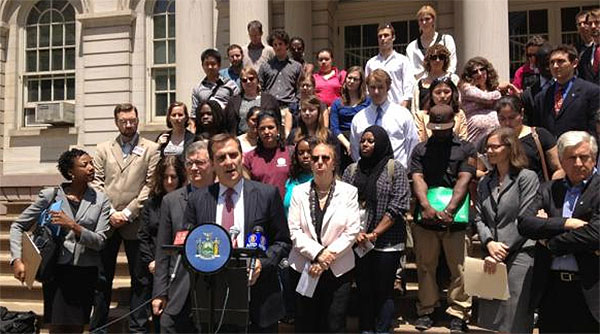 New Yorkers may soon have a new tool to influence their government. A bill in the state Legislature would allow members of the public, given enough support, to compel state agencies to hold public hearings on proposed rules.

The bill (S2397), sponsored in the state Senate by Senator Michael Gianaris of Queens, would establish a three-year pilot program ordering seven regulatory agencies — the Workers' Compensation Board and the Departments of Education, Environmental Conservation, Health, Financial Services, Labor, and Family Assistance — to hold public hearings if at least 125 New Yorkers petition them to do so.

Senator Gianaris told Gotham Gazette that these agencies were selected for being those that “the public would benefit the most from opening up.” The agencies listed craft rules that directly impact ordinary New Yorkers.

The legislation, which passed the Senate unanimously on June 11 and now awaits action in the Assembly, where it has been stuck in committee since early February, also authorizes agencies to use “innovative means” of enhancing public participation in the rulemaking process, including establishing a designated time for public questioning of agency officials, organizing roundtable discussions, and using teleconference technology.

New York could join several other states that require public rulemaking hearings upon petition. California, Arizona, Idaho, New Hampshire, Illinois, and Utah all have similar rules, though none require as many petitioners as New York might. In California, for instance, state agencies are required to host public hearings upon “request of any interested person.”

Similar legislation passed both houses of the State Legislature in 2008, but then-Governor David Paterson, citing “technical flaws,” vetoed the bill. In response to this previous legislative failure, this bill included the Workers’ Compensation Board within its ambit and established a timeliness clause. If a petition is received later than the twentieth day before the last date for public comment, the public hearing becomes optional.

Senator Gianaris told Gotham Gazette that “agencies come out with regulations that have the force of law and [New Yorkers] don’t know anything about it or how the process happened.”

He expressed hope that the legislation would “force agencies to opine on issues that they’d like to ignore and sweep under the rug.” When asked to specify such issues, he named transportation and healthcare, but added that there’s “no limit to the type of thing that people can now have open up to public discussion.”

Anticipating that “one of the main things that will come out of this [legislation] is related to housing issues,” Gianaris called the state’s Housing and Community Renewal agency “completely inaccessible.”

The Senate bill and its companion in the state Assembly, A9737, appear to be identical. The Assembly bill, however, has not progressed beyond its February 5 introduction and referral to the Assembly’s Standing Committee on Governmental Operations. Until it is passed by committee, approved by the full Assembly, merged with S2397, and approved by Governor Cuomo, the aforementioned measures will have no bearing on the functionings of New York state agencies. It’s unclear if Cuomo supports the bill, which would place the burden of implementation upon executive branch agencies under his purview.

Through a spokesperson, Assistant Assembly Speaker Felix W. Ortiz, of Brooklyn, said the bill should be considered next year. The legislative session is scheduled to end for the year on Wednesday.