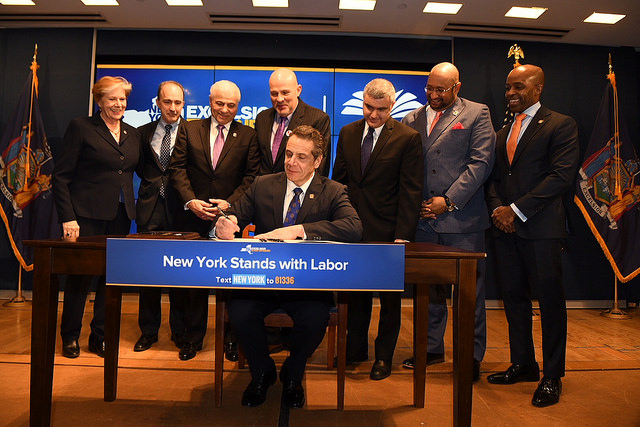 On a recent morning, Pam Stemberg tiptoed toward an open doorway. "My job is to stalk people," she said.

That's not quite her job. An English professor at City College in Upper Manhattan, Stemberg chases down colleagues in her second role as a union organizer. But her union pitch hasn't emphasized pocketbook issues like wages or benefits; it’s been focused on the threat posed by a Supreme Court case called Janus v. AFSCME, which concerns whether millions of public sector workers nationwide can opt out of the fees imposed by the union that represents them.

On Wednesday, the high court handed down a landmark 5-4 ruling that labor advocates like Stemberg feared and conservative groups sought: public workers can now opt out of union fees and must affirmatively opt in.

The ruling intensifies a high-stakes recruiting war as public sector unions try to keep workers paying fees, while conservative groups persuade them to opt out or not opt in at all. If a critical mass of workers chooses to stop paying, it could financially cripple public sector unions, hurt their ability to organize and negotiate, and diminish their political contributions, which largely support Democrats. The outcome of the recruiting battle will determine the power of organized labor in New York, the nation’s most unionized state, with ramifications for much of the policy that comes out of Albany and City Hall.

"It's really a race," said Randi Weingarten, the president of the American Federation of Teachers, or AFT, a union that represents 1.6 million public employees nationwide and has affiliates with over 600,000 public workers and retirees in New York state, during an interview earlier this year. “This is an existential threat.”

At issue in the case were agency fees, payments assessed to workers whether or not they join the union at their job as full-fledged members. The lawyers for Illinois child support specialist Mark Janus argued that such fees violate workers’ free speech rights, since the payments go to support collective bargaining.

Because the salaries of public workers are borne by taxpayers, the bargaining services amount to coerced political speech, the lawyers argued. Unions said the fees are necessary because workers who decline to pay them become freeloaders, benefiting from union services without financially supporting them.

Overall union membership in the United States has plummeted for decades, reaching an all-time low of 10.7 percent in 2016, but public-sector union membership nationwide has held steady at a far higher rate of 34.4 percent. That rate is even greater in New York, where two out of every three of the state's 1.4 million public sector workers belong to a union, the highest such rate for any state in the country.

Now that public sector union fees are optional, some workers will likely rescind their payments, reducing union revenues. Consider Michigan, Wisconsin, and Indiana, where right-to-work laws passed in the last decade have contributed to an average 2.1 percentage point drop in union membership, according to the left-leaning Illinois Economic Policy Institute.

The decision in favor of Janus will result in the eventual loss of 726,000 public sector union members nationwide, a decline of 15.3% in the 22 states that, until now, have required workers to pay union fees, an Illinois Economic Policy Institute report said last month. The study predicts that 136,000 of those lost fee-payers will be in New York, a more than 10-percent drop in the state.

The unions have sought to minimize their potential post-Janus losses by converting fee-payers to full-fledged members, and so retaining their payments, said Shaun Richman, program director of the Harry Van Arsdale Jr. Center for Labor Studies at SUNY Empire State College and a former organizing director with the AFT.

“The public sector unions are making sure they ask every single represented worker to join,” he said.

The Professional Staff Congress, or PSC, a union that represents 30,000 faculty and staff in the public university system in New York City, added two full-time organizers to what was a staff of five, said vice president Mike Fabricant. Another 200 union members, including Stemberg, have been talking to coworkers one-on-one about the importance of supporting the union, Fabricant said.

“They’re the lifeblood,” he said. “When a faculty member or staff person makes that argument it has a different gravity than when a PSC organizer does.”

A year ago, 86 percent of full-time professors represented by PSC were members; now 94 percent are, Fabricant said several weeks ago. The union has also seen an uptick in membership among adjunct professors: 54 percent a year ago has jumped to 62 percent, he added.

In April, Governor Andrew Cuomo signed a law that helps unions soften the blow of a decision in favor of Janus. The law requires public employers to inform unions of new hires and let them meet with the workers within 30 days; it also allows the unions to deny some services to workers who opt out of paying fees.

But the decision in favor of Janus will intensify right-wing outreach aiming to encourage public workers to opt out of union fees, said Dan DiSalvo, a senior fellow at the conservative Manhattan Institute and a professor of political science down the hall from Stemberg, at City College. In recent weeks, the conservative Freedom Foundation has sent mailings to workers on the West Coast about their now newfound opportunity to opt out. In the past, the Freedom Foundation has event sent organizers to knock on workers' doors.

“The position of Janus is his First Amendment rights are being violated because he’s being forced as a condition of his job to pay into an organization with which he disagrees politically,” DiSalvo said. Conservative groups are “not trying to recruit anyone to become a conservative or anything like that, but to inform people of their rights.”

“Nobody should be under any illusions that that’s not going to happen in Illinois, in California, in New York,” Richman said. “You might think they’re going to get punched in the face if they knock on the door to get people out of the union. They’re going to do it anyway.”

If public sector workers decline initial overtures from such groups, the workers can still withdraw from union fees down the road. “This is something that’s going to play out a bit longer than ‘oh, today there are unions; tomorrow there aren’t,’” said Richman.

The political implications could be significant, reducing the power not only of public sector unions but of the liberal politicians they support. “Perhaps there will be a rebalancing of the political playing field in states like California and New York,” said DiSalvo. “There might be a better policy mix.”

At the April signing of a bill to help unions in the event of a ruling in favor of Janus, Cuomo condemned the anticipated decision as an attack on workers.

"Too often, and at the hands of this federal administration, we are seeing the labor movement going backwards,” he said. “In New York it is a different story, and our efforts to protect working men and women are moving labor forward, making the workplace fairer and more just than ever before.

On this issue, Mayor Bill de Blasio appears to be in lockstep. "Organized labor brought us the middle class in this country," de Blasio reportedly said on Tuesday when asked about the then-impending Janus decision, adding that the anticipated outcome would be misguided and troublesome.

When the ruling came down on Wednesday, United Federation of Teachers (UFT) President Michael Mulgrew issued a statement, saying: “The Janus decision reflects years of scheming by forces desperate to destroy workers' rights and to undermine public education." He added that the teachers union "will remain strong, and we will not be silenced. Everything we have been able to accomplish for our members and our students has come from our ability to work together, and we will continue to fight for the rights of workers, their families and for public education.”

Stemberg said when she talks to coworkers, she focuses on building bonds, hoping that will minimizing any long-term losses. “You’re not only getting them to sign up but to value the union,” she said.

She said the organizing around a Janus decision has been bittersweet.

“I’m so grateful more people are paying attention,” she said. “Did I want it to be this way with Damocles’ sword hanging over our heads? Absolutely not—it’s scary.”