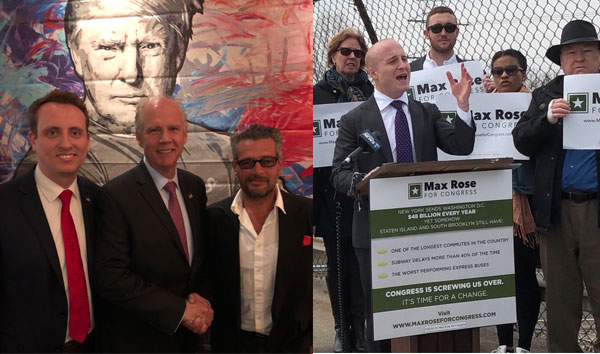 The congressional primaries in New York on Tuesday saw a shocking defeat for a Democratic party giant in Queens while other Democratic incumbents in the city held on with close margins. And on Staten Island, a closely-watched Republican primary ended with a wider margin for the incumbent victor than expected.

All eyes will now turn to the general election, with the full slate of candidates in focus. Nationally, Democrats are attempting to claw back a majority in the 435-seat House of Representatives by flipping key Republican seats -- they currently hold 193 seats and Republicans hold 235, and there are seven vacancies -- while Republicans are hoping to fend off a blue wave that has put them on the back foot in dozens of races across the country. New York races are expected to factor significantly into the House balance of power.

The Donovan seat is the only congressional district held by Republicans in New York City.

And there are still other races where candidates are seen as more long-shots to win, but given the surprise leveled Tuesday by Alexandria Ocasio-Cortez against Democratic Rep. Joe Crowley and the successes of Democrats, especially women, in other races in New York and elsewhere since Donald Trump’s election, some additional districts may be in play. For example, Liuba Grechen Shirley won her Democratic primary Tuesday and will now attempt to unseat incumbent Republican Rep. Peter King on Long Island.

Governor Andrew Cuomo, a two-term Democrat running for reelection himself, has also committed the state Democratic Party’s machinery to support Democratic congressional challengers. “Our focus now must turn to winning back the House of Representatives, and the road to accomplishing that runs right through New York State,” Cuomo said, in an email blast sent out by the state party on Wednesday morning. “The only way to stop Donald Trump and his hateful agenda over the next two years is to win back the House of Representatives,” he added, appealing for volunteers to join phone banking and canvassing efforts in the next few weeks.

As New York and the country move toward November’s Election Day, congressional races are now set, while state-level primaries will happen on September 13 for all 213 seats in the state Legislature and the state-wide posts of governor, lieutenant governor, comptroller, and attorney general. While those elections are being fought out, throughout the summer and into the fall, there will also be a good deal of attention of the state’s most contentious congressional races.

District 11
After a caustic primary battle, Rep. Dan Donovan, a former district attorney, emerged victorious over Michael Grimm, who held the seat before Donovan but resigned after pleading guilty on charges of tax fraud. Both candidates tried to ride the coattails of Republican President Donald Trump, tying their records to his own in a district that overwhelmingly voted for him in 2016 -- the district covers all of Staten Island and a small section of southern Brooklyn.

Grimm, despite his felony conviction, had a strong base of support on Staten Island but Trump endorsed Donovan a few weeks before the primary, pushing him far over the top in what became one of the most hard-fought primaries across the state. Donovan claimed victory with 63.9 percent of the vote to Grimm’s 36.1 percent.

On the Democrat side, decorated army veteran Max Rose emerged victorious with a similar vote share, pulling in 64.7 percent to beat five other Democrats for the nomination. Rose ran a well-funded campaign with support from the DCCC, raising a total of $1.6 million through June 6, according to Federal Election Commission filings.

Rose was formerly an executive at a nonprofit health care organization and worked as director of public engagement and special assistant under late Brooklyn District Attorney Ken Thompson. He has received endorsements from several local and state-level elected Democrats as well as prominent national Democrats -- including U.S. Sen. Kirsten Gillibrand of New York and Rep. Crowley. He was also backed by the local Brooklyn City Council Member, Justin Brannan. The Working Families Party and the Women’s Equality Party endorsed him, as did several unions and political action groups.

In a brief phone interview Wednesday, Rose said he will stay the course on his approach to the campaign. “The strategy does not change,” he said of moving on to the general election. Rose said his opponent “will do and say anything” to get reelected, including attempting to rewrite his record as he moves closer to the president. “So we’re gonna win the old-fashioned way. We’re gonna take it day-by-day, door-by-door, and Dan Donovan doesn’t stand a chance,” he said.

Though the district is split between two boroughs, Rose said his pitch wouldn’t be determined by the community where he campaigns, but rather by the bread-and-butter issues that residents care about. “[W]hat matters is what is troubling voters each and every day,” he said, pointing to crumbling infrastructure, interminable commutes, an increasing cost-of-living and the hundreds of opioid overdoses in Staten Island.

“We have got to earn voters’ trust first and then convince them that it does not have to be this way under any circumstances,” he said.

“People are disgusted across the board,” he continued. “We don’t have a South Brooklyn strategy, a Tottenville strategy, a St. George Strategy. That’s what’s wrong with politics, is that politicians try to slice and dice the electorate. They use poll-testing and based off some high-level analytics they say one thing to the community here and…say something in another community.”

For his part, Donovan used part of his victory speech Tuesday night to stress the importance of holding onto the GOP’s lone New York City congressional seat, and he connected the race to the larger battle for the House, warning his supporters that Democrats want to impeach Trump if they win control of the chamber.

District 19
Republican John Faso currently holds the District 19 seat in the Hudson Valley and the Catskills but is widely seen as a vulnerable incumbent in a toss-up seat. A former state Assembly member, Faso won the seat in 2016 after the retirement of Republican Rep. Chris Gibson. Like Donovan, Faso voted against the recent tax cuts passed by Congress and signed by Trump, and has also criticized the president’s “zero tolerance” policy that separated thousands of  migrant children from their parents. He ran unopposed in the primary and FEC filings show he has about $1.1 million in his campaign coffers.

Faso’s Democratic opponent in the general is Harvard Law graduate and Rhodes scholar Antonio Delgado, who won in a crowded primary that saw millions in campaign money coming in for all the candidates. Delgado was endorsed by Citizen Action of New York, a progressive, left-leaning organization that is now one of the few groups at the core of the Working Families Party. Delgado secured about 22 percent of the vote, which was enough to place him first over six other Democrats. He outraised all his primary opponents and has about $759,000 left for the general election.

District 1
Last night, Perry Gershon, a former businessman who’s framed his race as one against Trump, won the Democratic Party’s nomination to run in this eastern Long Island district. The Cook Political Report rates NY-01 as “Likely Republican,” and it went twice for Barack Obama before supporting Donald Trump in the 2016 election. Gershon will challenge two-term Republican incumbent Rep. Lee Zeldin, who won re-election in 2016 by 16 points over his Democratic opponent. As of June 6, Zeldin maintains over a 3-1 fundraising lead over Gershon.

District 2
First-time candidate Democrat Liuba Grechen Shirley will challenge incumbent Republican Rep. Peter King, who has been in office since 1992, in this Long Island district that also voted for Trump after supporting Obama twice. King won his most recent re-election with 62.5% of the vote, defeating Democrat DuWayne Gregory, who also lost to Grechen Shirley in Tuesday’s primary election. The day after her primary victory, Grechen Shirley challenged King, who recently said that town halls “diminish democracy,” to a series of five public debates. The incumbent, as of the beginning of the month, has over $3 million on hand, while Grechen Shirley has slightly less than $150,000 left over after her primary campaign.

District 3
Democrat Rep. Tom Suozzi won his seat in this district covering Long Island’s North Shore and part of Queens by a six-percent margin in 2016. NY-3 is narrowly Democratic, and it voted for Clinton in 2016 by the same margin as Suozzi. Republican challenger Dan DeBono ran unopposed in the Republican primary but, going into the general election, has less than one-tenth of the cash on hand as the incumbent.

District 22
First-term Republican Rep. Claudia Tenney narrowly won this large, rural, and majority-white central New York district in 2016. Democratic State Assembly Member Anthony Brindisi, who faced no primary challenger, will challenge Tenney in the general election. Tenney is a hardline conservative endorsed by the Tea Party and the National Rifle Association, and the district went for Donald Trump by 16 percent in 2016.

Brindisi’s fundraising has, at times, outpaced Tenney’s, and, as of June 6, the challenger maintains a $400,000 cash lead over Tenney. An April poll conducted by the Democratic Congressional Campaign Committee reported that 50% of voters in the district would favor Brindisi, who has been attempting to appeal to the district’s moderate Republicans, in the general election, compared to 44% supporting Tenney.

District 24
In this central New York district that voted for Trump once and Obama twice, Democratic law professor Dana Balter will face off against incumbent Republican Rep. John Katko. Katko styles himself a moderate Republican, claiming to have written in Nikki Haley’s name for president in 2016, though he has voted in line with the president approximately 90 percent of the time. Running for a third term in the House of Representatives, Katko won both his previous races by margins of about twenty percent. He maintains a 13-1 fundraising lead over Balter, who advocates for Medicare-for-All, a carbon tax, and elimination of cash bail.

***
by Samar Khurshid and Daniel Yadin