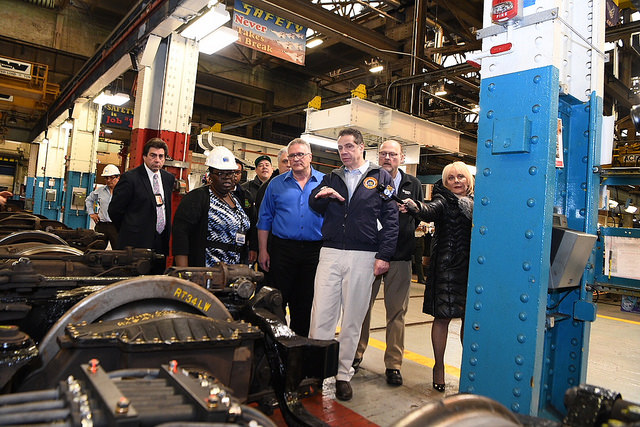 A bill to create a “transit lockbox” passed both houses of the state Legislature at the end of the session last month, setting up a showdown between the Legislature and Governor Andrew Cuomo, who has presided over hundreds of millions of dollars in diverted MTA funds and has been hesitant to lose flexibility to use money allocated to MTA operations and improvements for other purposes, such as debt service. Cuomo vetoed an identical bill in 2013.

The legislation would fully prohibit the executive branch from diverting any funds dedicated to public transit, whether operational or capital. If any funds were to be diverted with approval of the Legislature, such as through the budget process or other legislative means, the governor’s administration would be required to provide a full accounting of the diversion to the Legislature, such as its impact on fares, capital needs, or maintenance.

Cuomo, who has taken heat for numerous “transit raids” throughout his tenure, vetoed a lockbox bill five years ago, but faces new pressure amid an ongoing crisis in the New York City subway system, which has seen deteriorated service and reliability and is in need of major repairs and upgrades. The bill passed both the Republican-led state Senate and Democrat-controlled Assembly without any dissenting votes. Its sponsors are counting on that increased pressure forcing Cuomo’s hand.

“Money meant for transit should be spent on transit. And if it doesn’t get spent on transit, then transit users deserve to know exactly why their money is being diverted and how it will impact their fares and their quality of service,” said Assemblymember Jeffrey Dinowitz, a Bronx Democrat and the Assembly’s main sponsor of the bill, in an emailed statement to Gotham Gazette.

In the Senate, the main sponsor was Senator Marty Golden, a Brooklyn Republican. In a statement about passage of the bill, Golden referred to the diversions as “shortsighted measures,” and said that the bill “ensures that we have the funding needed to bring the MTA transportation system up to speed.”

Estimates for the total dollar amount of diverted funds during Cuomo’s tenure reach the hundreds of millions. Mayor Bill de Blasio frequently accuses the governor of having raided the MTA’s budget of $456 million. The mayor’s office elaborated in July of last year, noting $391.5 million in diversions from the operating budget to the state’s general fund, and $65 million in “reduction[s] in state reimbursements to the MTA in 2017.”

During this year’s state budget negotiations, de Blasio repeatedly argued that the $456 million should be returned to the MTA by the state in order to cover the half of the $836 million emergency Subway Action Plan that Cuomo and his appointed MTA board chair, Joe Lhota, were asking the mayor to allocate in city funds. Cuomo refused, and, working with the Legislature, forced the city to pay using a state budget mechanism. With little recourse left, the city acquiesced, apparently content with the plan’s lockbox provisions. Three years ago, the city pledged $2.5 billion in city funds to seal a hole in the MTA’s five-year Capital Plan, in exchange for a promise from the state not to divert the funds. The state also promised additional funding, more than $8 billion, to that plan, which runs through 2019, though, as usual, the MTA has not drawn down very much of the allocated capital plan money as of yet.

The governor disputes the mayor’s numbers on diverted funds, and has noted in the past that the state contributes more to the MTA than the city, which is true but for the fact that much of the state money originates with city taxpayers and commuters. The MTA has countered the mayor’s allegations by noting that “diversion” is a misnomer, given that substantial portions of the moved funds go toward paying down the MTA’s debt, rather than being used to fund completely unrelated projects. The MTA has said that $235 million of the $456 million diversion went toward debt service, with another $169 million diverted to “direct capital aid,” $30 million for operating aid, and $22 million saved.

The “lockbox” is seen as a transparency and accountability measure, and the governor has in the past made his contempt for reporting on the diversions apparent. The governor vetoed the 2013 bill because of its lack of any “emergency” diversion powers, according to his veto statement, but critics charged that requirement of a “diversion impact statement” whenever money was to be diverted from the MTA played a part in his decision. An earlier bill that passed both houses and was signed by the governor in 2011 had been stripped of that requirement and added a provision allowing the governor to divert funds in “emergencies,” which was removed in the 2013 bill.

In his 2013 veto statement, the governor said that the bill would “repudiate” the 2011 compromise, despite his insistence that he had “never declared a fiscal emergency and directed such transfers.” In the end, he called the bill “unnecessary.”

The veto was harshly criticized by both transit advocates and good government groups alike. In Cuomo’s next executive budget, he proposed that $40 million be diverted from the MTA operating budget to finance debt service; the end result was $30 million to service debt. The governor wields enormous power in the state budget process.

This year’s bill again requires that any diversion of funds be accompanied by a diversion impact statement. The governor would have to publicly account for the full dollar amount of a diversion, which funds (operational, capital, or otherwise) will be depleted, the total amount of diverted funds over the preceding five years, and a “detailed estimate of the impact of diversion from dedicated mass transit funds will have on the level of public transportation system service, maintenance, security, and the current capital program.”

In fact, the new bill is identical to the old bill that Cuomo vetoed five years ago. But MTA-related pressure on Cuomo this time is greater than last time, with the governor earning low marks in polls for his handling of the MTA during his tenure and election year critics, including his opponents from the left and the right, making MTA management a key campaign issue.

Advocates want to see the bill signed, among other actions they are pushing Cuomo and state lawmakers to take to drastically improve the transit system. “With NYCT President Andy Byford's Fast Forward plan to modernize the subway on the table, Governor Cuomo and the state legislature must raise the billions of dollars that will be required to make the plan a reality and spend them as intended,” said John Raskin, executive director of Riders Alliance, in a press release upon the bill’s passage.

Dinowitz concurred, noting that the urgency of the measure has been amplified by the subway crisis being acute in a manner not seen five years ago.

“Service quality on our subways and buses has deteriorated, especially in recent years,” Dinowitz told Gotham Gazette in an emailed statement. “As we look at the significant price tag of the MTA’s Fast Forward plan as well as transit needs in the rest of New York State, we must ensure that our public transportation systems actually receive the funding that they are allocated.”

The subway’s demise, and what to do about it, has become a major issue in this year’s gubernatorial election. Cuomo has said he supports the long-term plan put forth by Byford, a relatively recent MTA hire brought in to save the subways and improve bus service, but the governor has said how to pay for it is still the big question. The Daily News reported in May that the subway overhaul plan drawn up by Byford would cost $37 billion over ten years.

Cuomo has promised to continue to push for a congestion pricing plan during the next session in Albany. The second-term Democrat must first be reelected this fall. Cynthia Nixon, his challenger in the Democratic primary, has also backed Byford’s plan, and says she would pay for it through congestion pricing, a new millionaires tax, and a carbon tax. Along with congestion pricing, Cuomo has indicated he will expect New York City to kick in more for the MTA -- a new five-year MTA capital plan will soon be negotiated. Cuomo has not expressed support for a carbon tax or an added millionaires tax, Mayor de Blasio’s favored potential funding stream.

The governor’s office did not give any indication of support or opposition to the lockbox bill when asked by Gotham Gazette. “This appears to be one of 557 bills that passed both houses in the last few weeks of session and will be reviewed by Counsel’s office,” said Cuomo spokesperson Tyrone Stevens.