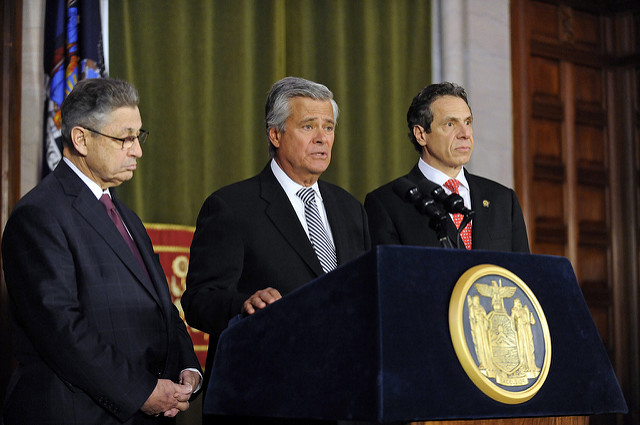 Dean Skelos, middles, with Silver and Cuomo (photo via the Governor's Office)

The once-powerful Dean Skelos, former Republican majority leader of the New York State Senate, and his son Adam were found guilty on federal corruption charges on Tuesday after a month-long trial in federal court in Manhattan. Skelos and his son had been similarly found guilty on all charges in late-2015 but their convictions were vacated after a Supreme Court ruling changed the definition of public corruption, precipitating a retrial that began last month.

Prosecutors charged Skelos with using his official position as leverage over companies that had business with the state, pressuring them to give his son more than $200,000 in payments. In turn, Skelos took actions to benefit those firms.

“Yet again, a New York jury heard a sordid tale of bribery, extortion, and the abuse of power by a powerful public official of this State,” reads a statement from the office of the U.S. Attorney for the Southern District of New York, which brought the prosecution. “And yet again, a jury responded with a unanimous verdict of guilt, in this case of Dean Skelos and his son Adam – sending the resounding message that political corruption will not be tolerated.”

The Skelos verdict is just the latest in a series of corruption convictions that have rocked state government, the Legislature, and the executive branch. Just last week, Alain Kaloyeros, a prominent ally of Governor Andrew Cuomo, was found guilty of bid-rigging state contracts under the Buffalo Billion economic development program. In May, former Democratic state Assembly Speaker Sheldon Silver was similarly found guilty of misusing his office for personal gain (Silver faced a retrial just like Skelos). And in March, Joe Percoco, a former top aide and campaign manager to the governor, was also found guilty of federal corruption.

Preet Bharara, the former U.S. Attorney for the Southern District who brought all four of those cases, tweeted Tuesday, “More congratulations to the fine team at SDNY, who just convicted — again — former NY senate majority leader Dean Skelos and his son Adam on all counts. Skelos and Silver will both be resentenced.”

In a statement, State Senator Todd Kaminsky, a former federal prosecutor who won Skelos’ vacant Long Island seat after the first trial, called on the state Legislature to pass stronger anti-corruption laws. “[T]his trial once again laid bare how broken and dirty Albany has become, and how far we have to go to reform it,” he said. “People want their faith in government restored, and they have been let down by years of inaction. It is time for a change.”

Since the multiple scandals broke, state government has taken no significant action to alter the playing field on which Silver, Skelos, Percoco, Kaloyeros, and others committed their misdeeds.