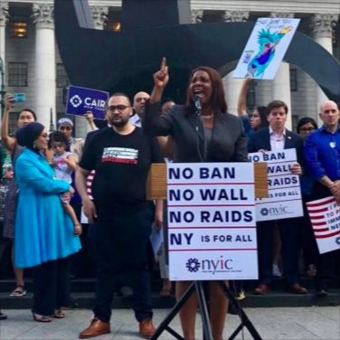 On Wednesday, July 18, the Max & Murphy podcast moved to the airwaves of WBAI radio, 99.5FM and wbai.org, where the hosts will weekly interview guests, discuss key issues, and take calls from listeners -- every Wednesday 5-6 p.m. The first show focused on the Democratic primary for Attorney General, with guest Letitia James, the New York City Public Advocate now seeking to become the AG. James joined the show to discuss her candidacy, how she stands out from her competition -- Zephyr Teachout, Leecia Eve, and Rep. Sean Patrick Maloney -- her relationship with Governor Andrew Cuomo, how she would fight public corruption, and much more. James also took a couple of listener calls. The show additionally included discussion of the race by the hosts, a short clip of last week's conversation with Teachout, and a couple of other listener calls for the hosts.

Listen to the full conversation and let us know what you think -- we're on Twitter @TweetBenMax and @JarrettMurphy. You can listen to the show through the embedded audio below or download the episode wherever you get your podcasts, under "Max & Murphy," and listen to the show on Wednesdays at 5 p.m. on WBAI radio.