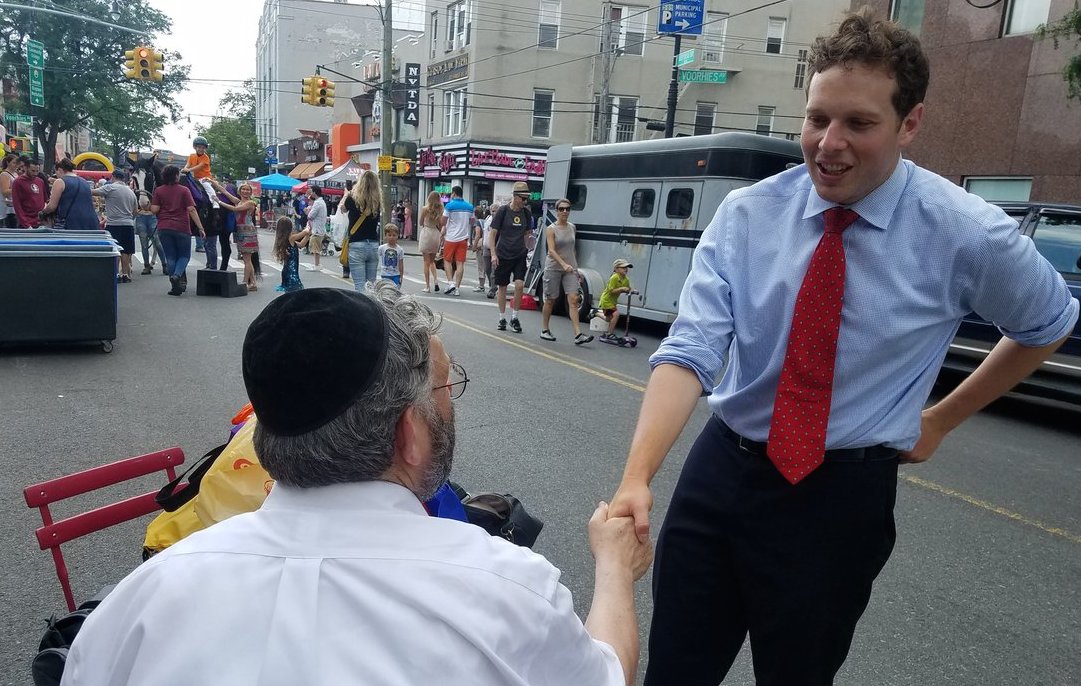 As the contested Democratic primary for a southern Brooklyn state Senate seat heats up with less than two months to go, reporter-turned-candidate Ross Barkan is calling out his opponent Andrew Gounardes for accepting the endorsement of the Reform Party and its local leader, Bob Capano, who has a history of anti-immigrant rhetoric.

Barkan and Gounardes are competing ahead of the September 13 primary for the Democratic nomination in state Senate District 22, hoping to unseat Senator Marty Golden, one of the few Republican elected officials in the city. The district covers swaths of southern Brooklyn, including Bay Ridge, Dyker Heights, Bensonhurst, Gravesend, Marine Park, and Gerritsen Beach.

Immigration justice is a prominent part of Barkan’s policy platform, and one that has taken on added significance under the Trump administration with its “zero tolerance” policy towards illegal immigration and some asylum seekers. Barkan has called for abolishing ICE, the immigration enforcement agency, and supports the passage of the New York Liberty Act, the DREAM Act, and giving driver’s licenses to undocumented immigrants, among other immigrant protections.

Gounardes, who is the general counsel to Brooklyn Borough President Eric Adams and a longtime Democratic presence in the area, including a 2012 bid to unseat Golden, has a similar platform and has backed some of the same policies as Barkan, including driver’s licenses and the Liberty Act. Gounardes is in favor of removing ICE from courthouses in the city but has not called for doing away with the agency entirely. He has the backing of the Working Families Party (WFP), prominent labor unions, and Democratic clubs. His previous boss, former City Council Member Vincent Gentile, has endorsed him as well, and he is close to the current Council Member in the area, Justin Brannan.

Gounardes’ outspoken support of immigrant rights, however, conflicts with his embrace of Capano, the Brooklyn Reform Party chair. Gounardes’ campaign website notably does not tout the Reform Party endorsement, which he received last month after being handed a Wilson Pakula certificate to obtain the party’s ballot line. He is running unopposed in the Reform Party primary and therefore is guaranteed both the Reform and WFP lines on the November 7 general election ballot (it is unlikely he would run a campaign in the general if he loses the Democratic primary to Barkan, however).

Capano, an adjunct political science professor at John Jay College of Criminal Justice, unsuccessfully ran as a Republican to replace Gentile in the 43rd Council District, when Gentile was term-limited out of the City Council last year. Capano and his branch of the Reform Party skew conservative, and he has been vocal in his anti-immigrant positions. He has been a prominent supporter of President Donald Trump and endorsed him in the 2016 Republican primary. He opposes Mayor Bill de Blasio’s progressive policies and recently supported ICE’s detention of Pablo Villavicencio, the undocumented pizza delivery worker who was taken into custody when making a delivery at Fort Hamilton army base.

“Political correctness can’t be allowed to determine which laws are worthy of prosecution and enforcement. The law is the law, and must be followed by all,” Capano wrote in an op-ed for Brooklyn Daily. Last year, Capano was heavily critical of Khader El-Yateem, a Democratic primary candidate for the 43rd Council District, calling the faith leader, who is a Lutheran pastor, a “radical cleric” and insisting that the nonprofit organization where he serves as treasurer, the Arab-American Association of New York, should be investigated for delving into political activities. Capano donated $125 to Gounardes’ campaign, and Curtis Sliwa, the chair of the state Reform Party, donated $100, according to campaign finance filings with the state Board of Elections. While the Reform Party has very few enrolled members, it has a ballot line to offer and a name that signifies good values to many voters.

On Monday, a few hours after Gotham Gazette asked Gounardes’ spokespersons for comment about his embrace of Capano, his campaign sent out a press release touting his immigration platform. 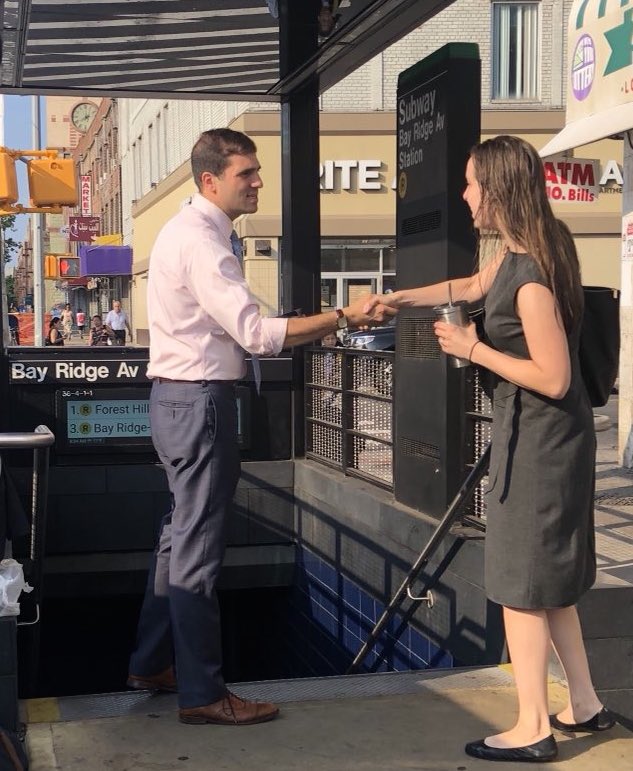 “To equate support with the Reform Party's agenda with anti-immigrant views is spurious,” Gounardes (pictured left) said in a statement to Gotham Gazette. “Throughout my entire career, I have been outspoken in my support for and in defense of immigrants and refugees. I was one of the first people in my neighborhood to vociferously condemn the NYPD's illegal surveillance in mosques, cafes, and bookstores. I have given speeches urging for more to be done to help refugees around the world...I am running a campaign based on action and issues that affect the community, and that is both how and why I will win this November."

Gounardes also noted that he is sponsoring a bystander training session later this week with The Accompany Project, an initiative of the Arab-American Association. The session comes in response to a recent incident of a Muslim woman being verbally accosted on a Staten Island-bound bus.

Barkan, in a phone interview a few hours before Gounardes’ statement, said it was “quite frankly confusing” that Gounardes chose to accept the Reform Party endorsement and align himself with someone whose views are “antithetical” to Democrats in 2018. Barkan, who said he is attending a separate bystander training on Tuesday night sponsored by the city with the AAANY, pointed to the bus incident as evidence that hate is increasingly being normalized even in communities in New York with large immigrant populations.

“My campaign is a repudiation of everything Bob Capano stands for,” Barkan said. “We can’t defeat Marty Golden by emboldening racism and anti-immigrant attacks. We have to counter it at every turn.”

Barkan called on Gounardes to return the donation from Capano and to drop the Reform Party line. “The money’s not the only issue. The issue is a larger one. You’re running on a party line whose borough chair has made the headlines for anti-immigrant attacks, for supporting Donald Trump vociferously. I firmly disagree with any politician or candidate, Andrew or anyone else, who thinks you can run on a party line and take some of what the party stands for but not the rest of it.”

The Barkan campaign connected Gotham Gazette with residents in the district who were apprehensive about Gounardes being allied with Capano.

Fatima Elmansy, a Bay Ridge resident who worked on El-Yateem’s campaign last year, said she decided to vote for Barkan after hearing of Capano’s support for Gounardes.

“[Barkan and Gounardes] both clearly have appealing characteristics and its almost hard to find what exactly the differentiation is,” she said in a phone interview, “but finding this out was very jarring to me and a little concerning. It’s quite difficult to advocate against bigotry and racism and then have something like this happen. It’s almost empowering that. I know Bob Capano...isn’t exactly not a racist.”

She added, “It definitely puts a lot of Andrew’s views into question and in south Brooklyn, in the specific area he’s running in, it’s really important I think to be a very accepting and open person and stand against racism and bigotry very clearly.”

Community organizer and social worker Costa Kokkinos, another resident, said in an email, “Any association or quid pro quo with Bob Capano is troubling news for many reasons. This is the same Bob Capano that spent most of his breath trying to convince voters that he was a bigger supporter of Trump than any other Republican candidate during his City Council campaign last year.”

Capano and other competitors lost the Republican primary by a wide margin to John Quaglione, an aide to Golden, who went on to lose narrowly against Brannan.

Kokkinos also cited Capano’s repeated use of terms like “illegal aliens” to describe immigrants. “I don’t know Andrew Gounardes very well and he seems like a genuinely good person and a good candidate for the State Senate, but if he is so willing to associate with Capano to get a few extra votes, I wonder what he will give this guy in return if he wins?,” Kokkinos wondered. “Is he willing to do the hard identity work that this State Senate district needs to evolve?”

In a statement, Capano said, “Andrew Gounardes and I do not agree on everything. The Reform Party is not about any one person's purported positions, but rather our focus on cleaning up Albany.”

He added, “We respect that Andrew stands up for the causes he believes in, and he is the only candidate, regardless of party, with a platform that will achieve a less corrupt government."

Note: This article has been updated to reflect that Gounardes is sponsoring the Accompany Project event, not just attending it, and Barkan is going to attend a separate event on Tuesday, July 24.

Note: Ross Barkan wrote a handful of articles for Gotham Gazette in 2012-2013.