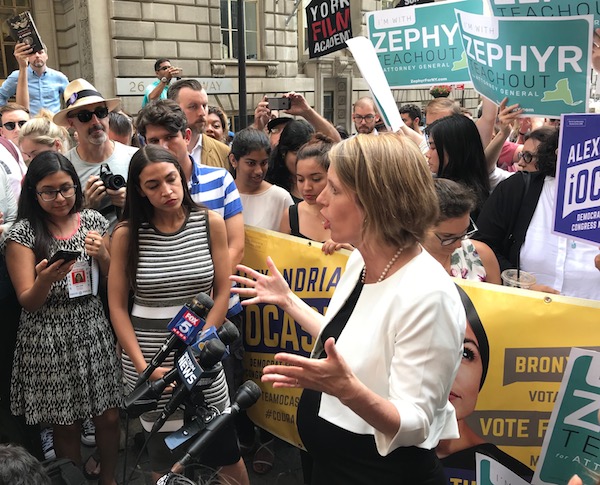 Democratic Attorney General hopeful Zephyr Teachout is placing the blame for mass layoffs at the New York Daily News on tech giants Google and Facebook, and plans, if elected, to enforce antitrust laws to battle what she calls a “duopoly” of ad revenue that is crushing local news.

Referring to big tech as a “parasite on journalism,” Teachout unveiled on Wednesday a broad, though somewhat vague, plan to use the antitrust laws available to state and federal prosecutors to break up Google and Facebook’s stranglehold on the news business.

In the wake of tronc, the Daily News’ parent company, laying off half the publication’s staff on Monday, much of the blame has been pinned on the corporation and its executives. According to the Daily Beast, tronc executives told remaining Daily News staff that they had no strategy behind the mass layoffs. Meanwhile, former tronc board chair Michael Ferro, who left the company in March amid a sexual harassment scandal, received a $15 million severance package from the company, drawing criticism.

Teachout, however, says that targeting tronc, while necessary, is piecemeal and would do nothing to save local news.

“I’ll look into illegality wherever it is, or any issues that fall within the jurisdiction of the AG’s office,” Teachout said at a Wednesday press conference outside the Daily News headquarters in lower Manhattan. “But I can’t repeat this enough. If we don’t actually deal with the systemic, structural issues that are squeezing out and starving local journalism, if we keep treating these as one-offs, we’re gonna keep losing local news.”

Though Facebook and Google still are clearly the dominant forces in online advertising, their share of the market appears to be slipping somewhat, according to the same firm cited by Teachout. A post from March suggests that Google and Facebook will see their share of digital ad revenue decline to 56.8 percent this year, and continue slipping in 2019 and 2020 as companies like Amazon and Snapchat grow their ad businesses faster than the two current juggernauts. None of it points toward ad revenue returning toward news publications themselves.

Meanwhile, Facebook’s profit margins are, according to Teachout, over 40 percent.

“Local newspapers around the country are getting decimated as the digital ad revenue is dropping and being shifted from the newspapers themselves, the journalists themselves, to Google and Facebook,” Teachout said, referring to this as the “ad tech tax.”

Teachout said that lax antitrust enforcement had allowed Google and Facebook to acquire companies and become massive juggernauts in the advertising industry. She said that she would work with other state attorneys general to bring a “major antitrust investigation to look into the ways in which Facebook and Google are wielding and maybe abusing their duopoly powers.”

She also proposed “rigorous enforcement” of state and federal antitrust statutes, like the state’s Donnelly Act, preventing anticompetitive business practices, and the federal Clayton Act, to prevent the proliferation of monopolistic mergers, to bust the duopoly.

As such, she wants to break up Google and Facebook in such a way that creates “healthy ad markets” with hundreds of firms making lower profit margins, and more revenue going to publications and journalists. In that vein, she hopes to block large mergers and acquisitions by companies like Facebook, citing its acquisition of Instagram as an antitrust violation -- both had been competing in the market for user-created photo content.

“We should explore breaking up these companies to allow for healthy ad markets which are necessary to support affordable access to news,” Teachout said. “So instead of newspapers begging for access to readers through Facebook and Google, what we should have instead is a healthy, vibrant, competitive ad market with hundreds of digital ad brokers competing -- with a profit margin, but not 40 percent profit margin -- competing for the attention of those news organizations.”

Responding to a question from Gotham Gazette, Teachout said that Google and Facebook were able to achieve such dominance in the online ad market because their mergers and acquisitions had been allowed to proceed at a hectic pace with little regulatory scrutiny. As such, if the companies were to be broken up into hundreds of smaller ad companies, and enforcement and legislative statutes prevented new mergers from taking place, then a newly competitive market would be sustained by government intervention and the share of revenue demanded by the firms would decrease.

The Fordham Law professor and constitutional scholar discussed her antitrust plans on the same day she received good news about a lawsuit she helped craft against President Donald Trump, for his alleged violation of the emoluments clause of the U.S. Constitution, which is said to prohibit payments from foreign governments to the president of the United States. A judge, citing Teachout’s work, ruled that a case brought by the attorneys general of Maryland and Washington, D.C. could proceed.

One area of antitrust action Teachout said she would pursue would be to prevent Facebook from using its platform to host both news from outside sources, like the Daily News or Gotham Gazette, and its own news content, such as the presentation of trending topics alongside posts from news services. Teachout referred to this as a “clear” violation of antitrust laws.

She also said she would support state legislation to prevent content discrimination on social media platforms, saying that large media organizations like the New York Times could afford to cut deals to better promote their content in a way that a smaller outlet -- she cited the Poughkeepsie Journal -- could not.

“I do see it as a combination of legislation and enforcement, but we gotta start with enforcement. We’re just not even enforcing existing laws.”