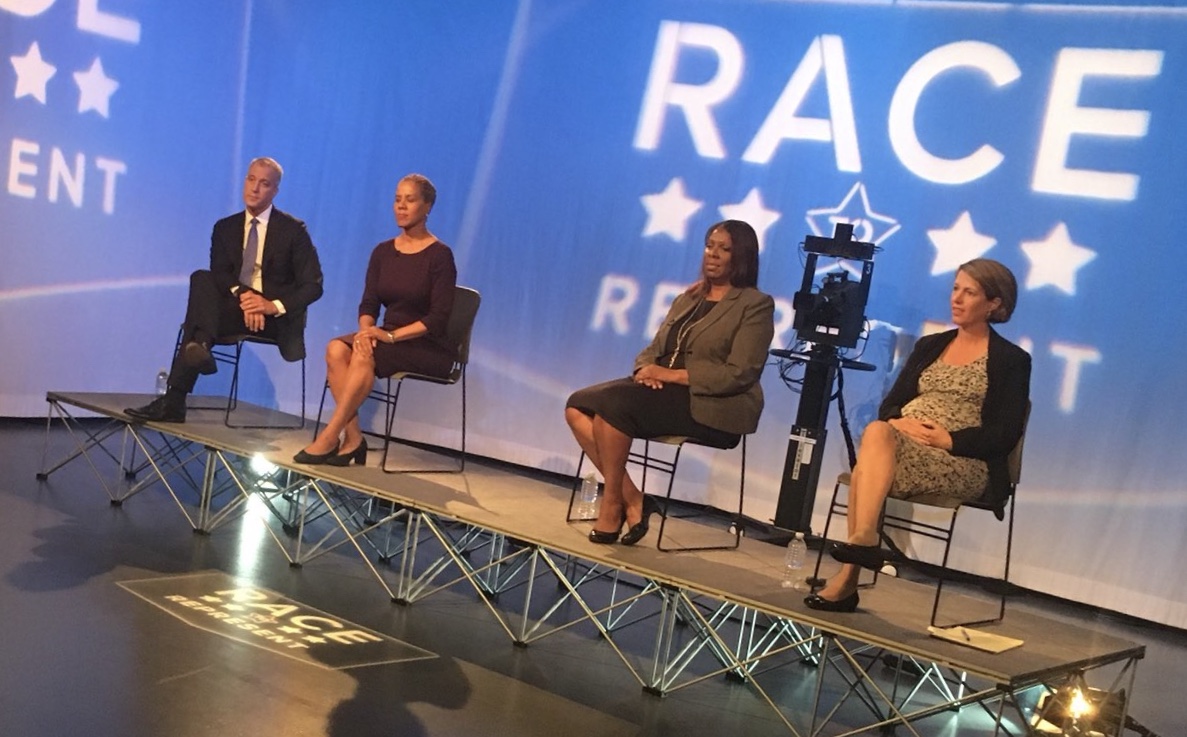 The four Democratic candidates for New York Attorney General met Tuesday for the first televised debate of their race, agreeing that the next chief legal officer of the state must continue to be a check on President Donald Trump, while also addressing corruption in state government and other areas of reform they would pursue in the role.

Each of the four candidates -- New York City Public Advocate Letitia James; U.S. Representative Sean Patrick Maloney; Fordham Law professor Zephyr Teachout; and Leecia Eve, a former aide to Joe Biden, Hillary Clinton, and Governor Andrew Cuomo -- sought to set themselves apart in what appears to be a wide open race for the party nomination, with candidates repeatedly calling themselves the only one in the race with certain qualifications.

The debate aired Wednesday evening on Manhattan Neighborhood Network and was moderated by Gotham Gazette editor Ben Max. Democratic voters will choose an attorney general nominee, among other races, on Thursday September 13.

All four candidates promised to ratchet up the already fever pitch with which the New York attorney general’s office is fighting Trump administration policies. On more direct state and local matters, there was also agreed upon acknowledgement of certain problems, such as public corruption and an outdated criminal justice system, but the candidates offered some differences in perspective as they sought to make a winning pitch to voters.

Two candidates -- Teachout and Maloney -- made new pledges to release their tax returns in line with what James has done, while two candidates -- Maloney and James -- joined calls by Teachout and Eve for state hearings on sexual harassment. Eve continued to decline to make her tax returns public. All four candidates said that it may be appropriate for further legal investigation into the fact that Cuomo’s former top aide and campaign manager, Joseph Percoco, used his government office while on leave to run Cuomo’s 2014 re-election campaign, information that came to light during Percoco’s recent corruption trial, wherein he was found guilty on several charges.

Teachout, who has offered herself as the candidate most independent of Cuomo -- she did challenge him in the 2014 primary, of course -- and of special interests due to her refusal of corporate PAC or LLC funding, said that despite Cuomo’s shuttering of the Moreland Commission to Investigate Public Corruption, the executive order creating it is still on the books, and promised to use its powers if elected Attorney General.

James expressed support for the creation of a new Moreland Commission. James, Maloney, and Eve all said that they would push the Legislature to give power to the attorney general to more ably address public corruption without referrals from other entities.

“Existing law should be changed to give the attorney general primary criminal jurisdiction over public corruption, period, full stop,” Maloney said. “Shouldn’t be any referrals or anything else, you oughta just go get it and prosecute it. We need to change the law.”

Eve said that she would utilize an existing agreement with the state comptroller to refer more investigative matters regarding state funds to the attorney general.

James, who has faced questions about her independence from Cuomo in recent weeks given their cross-endorsement and his help with her fundraising, said that she would be the most diligent addressing public corruption, even if it led to “the second floor,” where the governor’s office is located in the state Capitol. She noted that, while serving in the City Council, she had taken a leading role in uncovering the City Time scandal, which she characterized as “the biggest scandal in the City of New York.” “We recovered $700 million for taxpayers, working with Juan Gonzalez from the Daily News” she said.

James also set her sights on what she characterized as unaccountable, opaque public benefit corporations and authorities, which are state run but operate like corporations; examples include the MTA, the Dormitory Authority, and Empire State Development.

With the exception of Teachout, each candidate has somewhat close ties to Cuomo: Maloney endorsed Cuomo for reelection and urged Cynthia Nixon not to run against him; Eve headed economic development programming under Cuomo; and James has been endorsed by Cuomo and the State Democratic Party that Cuomo leads. Independence from the governor, who saw two top aides convicted of bribery and bid-rigging this year related to millions of dollars in economic development money, has become a major campaign issue in the attorney general race.

Asked whether there should be an investigation into whether Percoco had used state resources for campaign purposes under Cuomo’s supervision, as some of the governor’s critics have called for, all of the candidates said a variation of yes, with Teachout the most affirmative.

The candidates were also asked how they would approach the job of attorney general with regard to investigating financial firms for fraud or other wrongdoing. James had courted controversy when she recently told The New York Times that she did not want to be known as “the Sheriff on Wall Street,” a statement which propelled criticism from her opponents, who embraced the moniker and did so again Tuesday. At the debate, James reiterated her point, however, even after Eve said that she would want to be known as “the Sheriff of Wall Street.”

“No I don’t want to be known as the Sheriff on Wall Street, that’s reserved for someone else,” James said, apparently referring to former Attorney General and Governor Eliot Spitzer. “I want to chart my own path. I want my own title, my own title has always been and will continue to be ‘fighter.’” She proposed strengthening the Martin Act, a 1921 state law that gives the attorney general broad power to investigate financial fraud that was revived by Spitzer. James said she would seek to expand, within her first 100 days in office, the act’s statute of limitations from three years to six years.

“You know I want to be called the Sheriff of Wall Street,” Teachout said, claiming that the role of the attorney general as “regulator of last resort” was important with a federal government uninterested in regulating big banks and financial firms.

“One of the things I really take from Spitzer’s use of the Martin Act is that was an example of an old tool that hadn’t been used,” Teachout said, “being dusted off and used in new and critical ways to hold Wall Street accountable. That’s the kind of creative lawyering, creative legal strategy, that I as the next sheriff will pursue.”

Maloney, too, was quick to rebuke James. “Of course you’re gonna be the sheriff of Wall Street, that’s literally the job,” he said. But like James had explained of her perspective, he made sure to say that he would also be the “sheriff” of such issues as Trump, environmental protection, LGBT equality, and criminal justice reform.

The representative from the upper Hudson Valley repeatedly noted that he has fought and beaten Republicans, referencing the fact that he has been elected several times in what is a swing district, and touted his government and management experience. James and Eve also highlighted their work in goverment and overseeing teams of employees, while Teachout focused on her expertise in corruption and law, and her work helping to craft litigation against President Trump for alleged violations of the emoluments clause of the Constitution.

And when asked which other candidate they would vote for if they couldn’t vote for themselves, Maloney and Teachout each said that they would vote for Eve, while Eve and James said only that they promise to vote for the winner of the Democratic primary. Eve, who has trailed significantly in public polling, may have been the safe choice for Maloney and Teachout, though when The New York Times editorial board endorsed Teachout earlier this week, it also noted Eve as its second choice.

When offered the opportunity to cross-examine one opponent, none of the candidates opted to ask a question of James, who has led in that public polling for the race despite a high undecided count; she has the support of most of the party “establishment,” including elected officials, clubs, and labor unions. Instead, two questions were leveled at Maloney, and two at Teachout.

Teachout was asked by James about opposition to the NY SAFE Act, a signature Cuomo gun control law, during her 2016 Congressional run, to which Teachout said her opposition was only to the secretive process to its passage, part of a pattern of how business is done in the state Capitol that she has consistently denounced. Teachout was asked by Maloney about a citation she had received from the North Carolina Bar, where she is licensed to practice law, which she said was due to not sharing a change in address during a case.

Maloney was asked by Eve about why he had chosen to run simultaneously for attorney general and for his congressional seat, a situation that led fellow member of Congress Kathleen Rice to not seek the nomination for attorney general. Maloney said that a judge had already decided in his favor.

Maloney was asked by Teachout about $150,000 he received in donations from eight LLCs connected to the Durst Organization, one of the largest real estate developers in New York City. Maloney first attempted to say that Durst felt he was the most qualified candidate and to deflect to in-kind and super PAC contributions Teachout had received in 2016, but when pressed for a more full response by the moderator, he said that the Durst contributions were a “small part of” his overall fundraising. Maloney had earlier concurred with his opponents that the “LLC loophole,” wherein corporations can give virtually unlimited amounts of money to candidates by forming various limited liability companies, should be closed.

Other targets for investigations, lawsuits, and prosecutions specifically named by the candidates included the fossil fuel industry, the pharmaceutical industry, the National Rifle Association, real estate developers, and “bad landlords.” The candidates also said that they would use the bully pulpit to advance civil rights causes, particularly in the realm of criminal justice reform: each candidate said that they believe cash bail should be abolished, and that Mayor Bill de Blasio’s 10-year timeline for closing Rikers Island jails is too long. All four said they will not run for governor, which would separate them from recent attorneys general-turned-governors Spitzer and Cuomo.