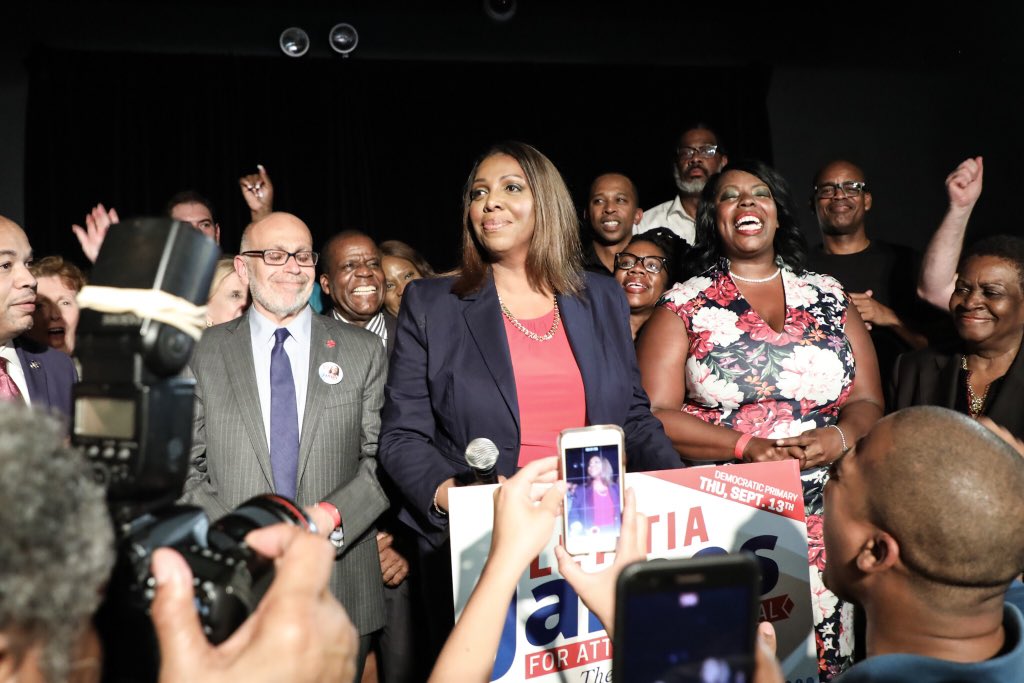 James, who pitched herself as having the best track record to become "the people's lawyer," was declared the victor of what appeared to be a wide open, three-way race, at around 10:30 p.m., when most precincts had reported their results and she had 42 percent of the vote, Teachout trailed with 30 percent, Maloney had 23 percent, and Eve had 3 percent. A joyous Brooklyn venue of supporters rejoiced and awaited James’ arrival, as elected backers of her campaign lavished praise on the public advocate and thanked those who worked on and supported her campaign.

With 99 percent of precincts in as of about 1 a.m., James sat at just over 40 percent of the vote, with Teachout at 31 percent, Maloney at 25 percent and Eve at 3 percent.

During her roughly 15-minute victory speech to several dozen supporters, James was surrounded on stage by elected officials, union leaders, and political operatives. She hit her campaign themes, promising independence, to stand up for all people, and to fight President Trump, while also striking a unifying message among her fellow Democrats, with kind words for her competitors after a race that had its share of insults and criticism.

"We’re all in the same boat now. And so I hope that all of the individuals who did not support me, who did not vote for me, will give me a chance…to earn your respect,” she said, going on to promise to fight for women, immigrants, and other often disadvantaged or marginalized groups.

“To be honest with you,” James said, “this campaign was really not about me, or the other candidates who ran. It was about the people, but it was about that man in the White House, who can't go a day without threatening our fundamental rights.”

James went on to say that she would stand up for those adversely affected by Trump’s policies, and help New York present a contrast with the president’s vision.

Earlier in the day, after voting at her polling place in Brooklyn, James told Gotham Gazette about her initial agenda, if elected in November:

“If we win, the first 100 days we’ll be focusing on making sure that we get original jurisdiction to investigate corruption in the state of New York, it’s fortunate that the attorney general be in a position to investigate corruption and not have to ask for the governor to do so. Two, that we focus on the pardon loophole, that we pass that pardon loophole as soon as possible. I’ve already spoken to the [Assembly] speaker, I’ve spoken to some members of the state Legislature, it’s important that we pass that pardon loophole."

"Three, that we strengthen all of our laws in the state of New York because right now it’s really about states' rights. We’re on our own, we know that the federal government has basically closed down so we’ve gotta focus on consumer protection and strengthen that, environmental laws and strengthen that. We’ve gotta focus on regulation, particularly as it relates to banks and make sure that the next crisis that’s around the corner, that is the unfortunately the default of so many student loans. We need to focus on bad actors and unscrupulous individuals who are engaging in a pattern and practice of preying upon students in the state of New York. and we need to focus on those servicers of mortgage loans. We are still suffering from the foreclosure crisis. We’ve got a number of zombie homes, not only in the city of New York but all throughout the state of New York. We need to make sure that we address this foreclosure crisis here in the state of New York, we need to provide them with settlement funds, and that’s also an issue that I’m going to have a discussion with the governor of the state of new york, that settlement funds should not be diverted into the general fund but they should be used for its original purposes, particularly when you are seeing a significant number of zombie homes in our state. And as the next AG, I can’t wait to go to work. I can’t wait to wake up each and every day, go to the office, sue somebody and then go home."

Though she has in recent years been criticized by many for too infrequently taking on Mayor Bill de Blasio on key issues — and in recent months taken heat for her closeness with Governor Andrew Cuomo, who handily bested Cynthia Nixon Thursday evening — James has nevertheless made the case that she's consistently been independent. And, James said during her victory speech, she has always been, and continues to be, an advocate for the downtrodden, taking on the powerful when the need arises.

”Nothing has changed,” she said. “I will continue to fight on behalf of tenants and marginalized individuals and vulnerable populations…Nothing is going to change about Tish. I’m still just a girl from Brooklyn."

James will face Republican Keith Wofford and other smaller party candidates in the general election.