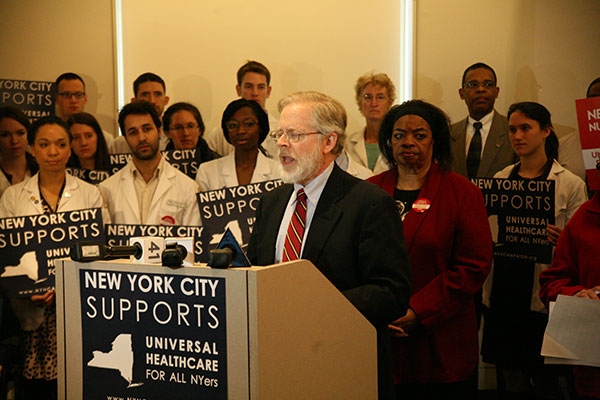 Wendy Stark is ready to press the reset button on health care. The executive director of Callen-Lorde Community Health Center, based in Lower Manhattan, Stark is hopeful that an overhaul may be on the horizon in New York through controversial legislation gaining increasing attention as this fall’s elections determine the upcoming balance of power in state government, from the governor’s office through the state Legislature.

The New York Health Act -- which has increasingly strong chances of passing the state Legislature but does not have the support of Democratic Governor Andrew Cuomo, who is favored to win a third term -- would set the stage for New York to toss out the current health insurance system in favor of a single taxpayer-funded, government-administered health care program for everyone.

As the bill has been the subject of more debate in recent months, partially stemming from gubernatorial candidate Cynthia Nixon’s support for it, powerful lobbyist groups representing insurers, hospitals, and businesses have been vocal about their opposition. The Business Council of New York State took to Fox & Friends to denounce the legislation, while others have written op-eds in local publications. Republicans running for office, including gubernatorial nominee Marc Molinaro, are warning New Yorkers about a potential government takeover of health care.

But as the leader of a health care provider that serves mostly low-income members of the LGBT community through its clinics in Manhattan and the Bronx and employs more than 350 people, Stark has a very different take. She says in addition to allowing her organization to save on employee benefits and administrative costs -- a projection generally backed up by the RAND Corp.’s recently-published analysis of the New York Health Act -- a single-payer system would cut down on the red tape patients have to deal with.

“So many of the barriers to care people experience are rooted in the economics of health care,” Stark said. “We don’t believe health care can make adequate improvements without changing the foundational economics of how it works and is paid for.”

Under the proposed single-payer system, insurance premiums, deductibles and copays would all go out the window, and patients could visit any health care provider without having to worry about whether they were in their insurance network. Meanwhile, taxes would go up, with the wealthiest New Yorkers paying a greater portion of their income and employers paying a certain amount per employee. Under the sample tax model proposed by the RAND Corp., the state would have to collect an estimated $139 billion in new taxes in 2022 to pay for the single-payer system. Still, RAND projected that overall spending on health care would go down -- barring a few caveats that that could stand in the way of the system being successful.

Callen-Lorde is one of 10 community-based health centers and 183 total nonprofit groups statewide that have publicly endorsed the campaign supporting the New York Health Act (in addition to a variety of mostly small for-profit businesses). But while it may seem like a natural fit, the bill still has a ways to go to become a widespread legislative priority for the large contingent of community-based organizations that help connect immigrants, people with behavioral health problems and housing insecurity, formerly incarcerated individuals, and members of other marginalized groups to needed health care and social services.

Many nonprofit health centers and other organizations, including those in the human services sector -- which employ a growing workforce and have formed coalitions to represent their interests in Albany and Washington, D.C. -- are still examining the implications of the New York Health Act before issuing full-throated endorsements. Others are directing their limited resources to what they see as more pressing policy and funding concerns.

But that may change as the policy conversation develops. Groups like the Federation of Protestant Welfare Agencies, FPWA, which represents 170 human-services and faith-based organizations, are hoping to help move things along.

“We believe the New York Health Act would strengthen nonprofits both for the communities they serve as well as their employees, and make the system more tenable long-term,” said Winn Periyasamy, policy analyst at FPWA.

FPWA, along with the Coalition for Asian American Children and Families and the New York Immigration Coalition, hosted a forum on single-payer for nonprofit representatives on the Lower East Side last month, where they heard about the New York Health Act directly from its lead sponsors in the Legislature, Assemblymember Richard Gottfried and Senator Gustavo Rivera, both Democrats who represent parts of New York City in their respective legislative houses.

New Yorkers in favor of a single-payer health system will know they’re winning, Rivera told the audience, when sinister images of him and Gottfried start appearing in insurance-industry funded attack ads.

“I can’t wait for that gritty video, I can’t wait for it!” said Rivera, of the Bronx, exuding confidence that the debate over the state’s single-payer bill is on its way to reaching a fever pitch.

The New York Health Act passed the Assembly the last four years in a row, but was thwarted each time by the Republican-controlled Senate. Now the bill--which was already only one sponsor short of a majority in the Senate in the last session--is among a slew of progressive measures that have been infused with new hope following the dissolution of the Independent Democratic Conference, which allowed Senate Democrats to caucus with Republicans.

“This is real,” Gottfried insisted at the forum. “This is not a dream. And you and your people are really crucial to making sure it gets done.”

Those in attendance were particularly interested in how the bill would affect undocumented New Yorkers, who are generally not eligible for health insurance now but would be under the single-payer system. Undocumented New Yorkers currently often use public hospitals at great expense, having eschewed preventative care due to their documentation status and lack of insurance. Dr. Mitchell Katz, chief executive of the cash-strapped NYC Health + Hospitals system, praised the Assembly on Twitter for passing the New York Health Act in June.

Attendees at the event also talked about the need to properly translate materials on single-payer into the languages of the communities they serve.

“We’re reaching into our Asian-American communities,” said Anita Gundanna, co-executive director of the Coalition for Asian American Children and Families. “A lot of people had never heard of the [single-payer] proposal before or thought through the impact of it, so for us the very beginning step is to expose our communities to what’s going on and how it might impact them.”

CACF and other groups serving Asian-Pacific Americans advocate for health care initiatives through Project CHARGE, the Coalition for Health Access to Reach Greater Equity. Gundanna said there’s a need to get more buy-in from individual organizations before single-payer can become an official part of the coalition’s policy agenda.

“We have to be strategic and patient,” she said. “We can’t move without having our coalition behind us.”

On the bright side, Gundanna pointed out, the nonprofit sector had to increase its capacity to share information about health policy a few years ago in order to help people understand and get insured through the federal Affordable Care Act, also known as Obamacare.

But more recently everyone has been on the defensive, using their resources to try to preserve the ACA and prevent a wide array of federal policies from taking effect. Lately, many organizations are preoccupied with changes the Trump administration is considering to the Public Charge Rule, which people in the social-services sector say are already discouraging some immigrants from using public benefits, including subsidized health insurance, for fear it could be used as a strike against them later.

Asked about the New York Health Act, the Community Healthcare Association of New York State, which spent much of 2017 and early 2018 consumed by a battle to secure endangered federal funding for its members, said in a statement, “CHCANYS supports innovations in health policy that improve access to high-quality health care for everyone. We continue to study the options for expanding coverage to all New Yorkers and are closely monitoring the current political discourse.”

Meanwhile, the Human Services Council, whose advocacy focuses on improving the government contracts its member organizations rely on for funding, is not likely to take a position on the New York Health Act, said Allison Sesso, the coalition’s executive director.

“Doing stuff on this is not why we exist and could eat up resources,” said Sesso, although she added, “I think this conversation is really important and I’m glad it’s being elevated.”

As advocates for the New York Health Act work to make the case that it’s worth the time and effort for would-be proponents to support the bill, they are also faced with the uphill battle of getting the governor on their side. A year ago, before the bill stood much of a chance of passing both houses of the state Legislature, Cuomo signaled some slight openness to the idea of implementing a single-payer system in New York. Asked about it again during his debate with Nixon, before he beat her in the gubernatorial primary this month, Cuomo came out against the idea. He said he thought it could work at the federal level but would be too costly an endeavor for the state to embark on alone.

***
by Caroline Lewis for Gotham Gazette. On Twitter @clewisreports and @GothamGazette.