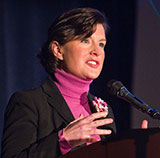 Former Syracuse Mayor Stephanie Miner, a Democrat, is running for Governor as an independent, on the new and bipartisan Serve America Movement party ballot line, which she helped create through petitioning for this year's race. Miner, who has had a contentious relationship with Governor Andrew Cuomo, says there's "no place" for her "in Andrew Cuomo's Democratic Party." Miner is running on her government experience and plans to revamp how the state invests in jobs and infrastructure, among other plans, and joined the show to discuss her candidacy.