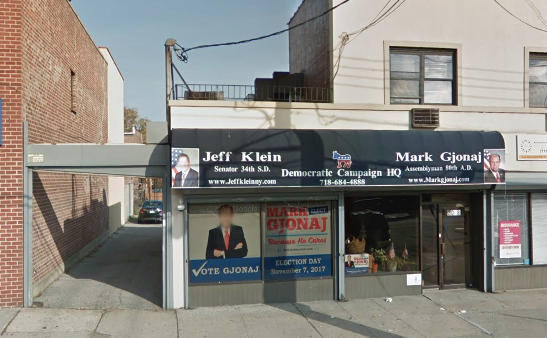 Bronx City Council Member Mark Gjonaj already has a 2021 campaign office, and an officemate. The “Gjonaj 2021” re-election campaign account pays rent for a headquarters in Morris Park that is shared with State Senator Jeff Klein, a longtime Gjonaj ally and founder of the now-defunct Independent Democratic Conference who recently lost in the Democratic primary to challenger Alessandra Biaggi. The two have shared the office space since Gjonaj’s days as a member of the state Assembly.

The two Bronx politicians share a lot. Gjonaj’s City Council district and Klein’s State Senate district overlap significantly. In 2017, Klein endorsed Gjonaj for City Council, and Gjonaj then campaigned for Klein’s re-election this year, going viral in August for yelling “Shame!” through a megaphone at Biaggi as she entered a campaign event.

The two also share connections to a campaign consultancy, lobbyist, and the Squitieri family, large donors to both officials. ProPublica recently exposed Sanitation Salvage, the Squitieri family-run business, for its problematic and deadly business practices in the private waste carting industry. The reporting caused its license to be suspended by the Business Integrity Commission (BIC), punishment both Klein and Gjonaj have fought against.

Klein made major headlines losing his re-election bid last month. He is the largest figure from the IDC, which he started and led, and that previously had a power-sharing agreement with Senate Republicans. Six of the eight former IDC members lost in their Democratic primaries, though some, including Klein, may continue into the general election on other ballot lines. Klein also made news for dropping an unheard-of $3 million in the race as a whole, spending around eleven times more per vote than his opponent.

The Hamilton Campaign Network received about a third of Klein’s spending, though it in turn paid other vendors for campaign work. The political consultancy received $1,014,197 from Klein’s committee in 2018 for mailers and TV and online ads, among other services, according to state campaign finance records. Gjonaj’s 2017 campaign for City Council, which itself set records for spending, paid $212,034 to the group, according to city records.

The head of the Hamilton Campaign Network is John Emrick, former chief of staff to Jeff Klein. Emrick left the IDC fold in 2016 to work in campaigns, returning to work for Klein in a different way this year.

Emrick also lobbies government on behalf of the company that owns the Hamilton Campaign Network, MirRam LLC. During the recent primary election, MirRam’s campaign consultancy company has been a client to most of the former members of the IDC, including Marisol Alcantara, Tony Avella, and David Carlucci along with Attorney General hopeful Letitia James, who has paid MirRam for consultancy since she successfully ran for Public Advocate in 2013.

After Emrick left Klein’s office to campaign and lobby at MirRam, state law places a two-year wait period for former public officials to lobby where they once worked. However, Emrick was still allowed to lobby New York City officials, which would include Gjonaj, and city records show he lobbied on behalf of prominent donors to both Klein and Gjonaj.

Emrick worked as a lobbyist on behalf of the Squitieri brothers in the Bronx since 2016, according to city lobbying records. Sanitation Salvage, run by the Squitieri family, is one of the largest private trash companies in New York City. ProPublica reported that Sanitation Salvage skirted regulation for years, even after worker deaths, through lobbying and a strong foothold in the Bronx political machine.

Since 2016, Steven Squitieri has paid MirRam Group LLC, where Emrick is listed as an employee and as involved in these lobbying efforts, $122,500 to lobby the City Council for Sanitation Salvage.

A spokesman for MirRam said Emrick was not available for comment on this story.

Gjonaj’s connections to the Squitieris go beyond Emrick. Gjonaj’s political club, the North Bronx Democratic Club, has had little activity in the last few years, but Gjonaj has said it was formed to seek out “disenfranchised voters.” More notable is the club’s president, John Squitieri, one of the owners of Sanitation Salvage. The location of the political clubhouse is 2018 Williamsbridge Road, or the campaign headquarters of Gjonaj 2021 and Klein 2018.

Through a number of LLCs and corporations, the Squitieri family has given $120,000 to Klein and $40,000 to Gjonaj since 2007, according to ProPublica.

After criticism that the BIC had softened its oversight of the private trash industry, in August the regulatory agency suspended Sanitation Salvage’s license for unsafe business practices. Salvage quickly filed a lawsuit in Manhattan Supreme Court to fight the suspension.

Klein and Gjonaj then joined in to submit a letter of support for Sanitation Salvage to restore the company’s license. They called the suspension “troubling.”

“Sanitation Salvage has been an exemplary example of a good corporate citizen. Each of our offices have worked directly with Sanitation Salvage in different capacities and have had very positive experiences,” reads the letter.

Gjonaj’s office did not respond to several requests for comment for this story. Sen. Klein could not be reached for comment and has not appeared in public since primary day a month ago.

Good government groups argue that the problem is much larger than Gjonaj and Klein’s close relationship with donors. Alex Camarda, senior policy advisor for Reinvent Albany, contends that problems arise when campaign consultants with established relationships to candidates can also lobby on behalf of other parties, including donors.

"There ought to be a cooling off period before political consultants can lobby the very elected officials whose campaigns they ran," said Camarda. "There is a great deal of public cynicism about government these days, and arrangements like these undermine people's confidence that government officials are making decisions in the public interest."

MirRam Group, run by one of its founders, Luis Manuel Miranda, is not the only group that dabbles in both campaign management and lobbying. The Parkside Group is one of the largest similar groups. This year, it worked on the campaigns of Rep. Joe Crowley and State Sen. Andrea Stewart-Cousins along with lobbying for state interest groups like developers and unions.

State Senator Avella, another former member of the IDC, actually proposed legislation in January of last year to prohibit “certain lobbyists and political consultants from being affiliated with each other, or engaging in the other's profession.” The other two sponsors were then-IDC member Senators Diane Savino and David Carlucci (Savino and Carlucci were the only two of the eight IDC members to win their Democratic primaries in September).

A similar version of Avella’s bill was introduced in 2013 by Senator David Valesky, then of the IDC, but the legislation went nowhere. Avella also sponsored a bill in 2015 as a response to Mayor Bill de Blasio’s close relationship with Jonathan Rosen, co-founder of BerlinRosen, who was a very involved outside advisor to the mayor but also lobbied for a number of special interest groups. BerlinRosen helped de Blasio get elected and re-elected as mayor, and Rosen has remained a close confidante throughout, often attending government-related meetings hosted by the mayor.

Avella’s legislation this year, which has not gone to the floor for a vote, details some of the issues that arise when campaign consultants are able to lobby their former employers:

“The relationship forged between a candidate and his or her political consultant during a campaign is tight, often unassailable. Political consultants who also lobby have a unique opportunity to trade on this personal capital when pushing the interests of their other clients for new laws, government approvals or funding,” it reads.

Emrick has not directly lobbied the State Senate since leaving his former office, according to filings with the New York Joint Commission on Public Ethics (JCOPE). He has lobbied the State Assembly, the City Council, and Council Member Gjonaj after working to help him win his election.