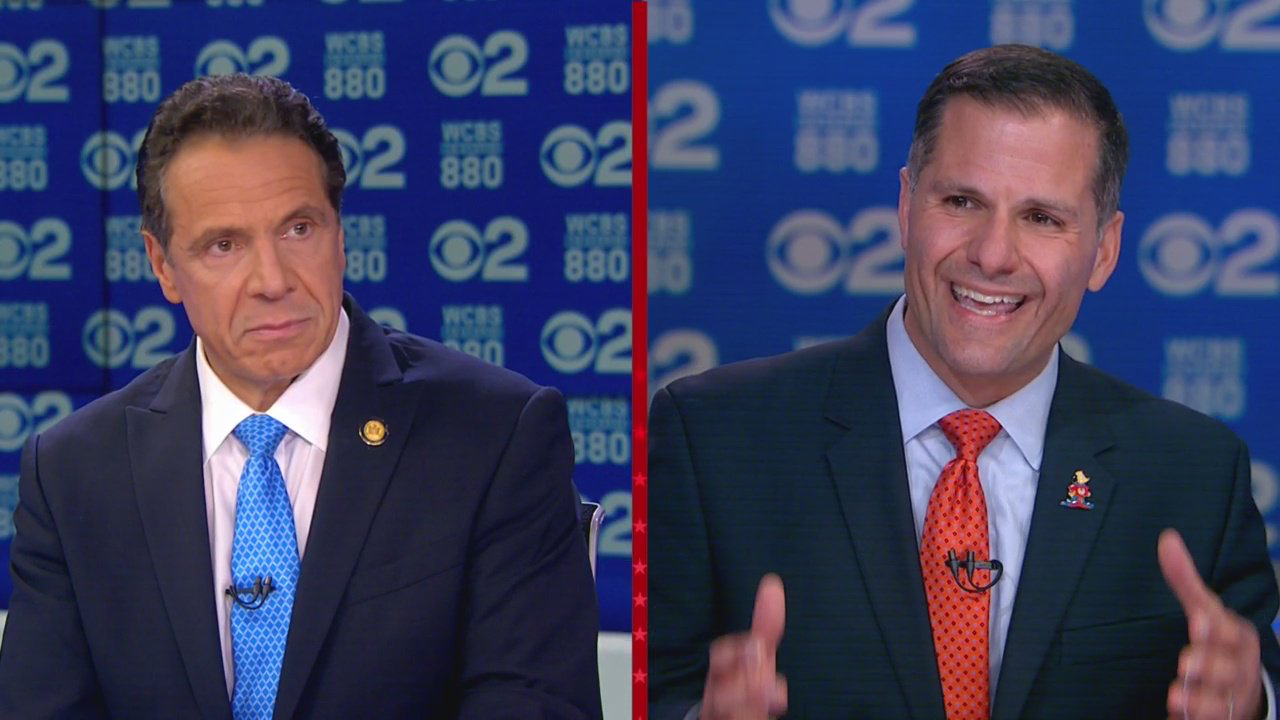 Governor Andrew Cuomo has said that debates can be a “disservice to democracy” and on Tuesday he ensured that what is likely to be his only general election debate provided limited clear and substantive discussion for voters to chew on ahead of the November 6 election.

A Democrat seeking a third term as governor, Cuomo took an aggressive and at times hostile approach to his debate with Republican nominee Marc Molinaro, currently the Dutchess county executive, filmed Tuesday afternoon at CBS studios in Manhattan and aired that evening on CBS TV and radio. Known for brashness and bullying, Cuomo repeatedly raised his voice, interrupted his opponent and the two moderators -- CBS’s Marcia Kramer and Rich Lamb -- and, as he does with state government, bent the shape of the debate to his liking.

Cuomo dodged several questions and insisted on having Molinaro answer some of the governor’s own, regularly exerting his will to dictate terms of engagement. More often than not, Molinaro and the moderators were overpowered, with all three parties showing frustration at times, Molinaro most often. However typically indelicate, Cuomo painted the picture of Molinaro that he wanted to get across to voters.

The Republican nominee did assert himself repeatedly, though, criticizing Cuomo on a number of fronts, including corruption in state government, a broken subway system, and budget spending. The two candidates accused each other of lying and corruption, and disagreed on several policy areas when those positions were intermittently discernable amid the noise.

While the degree to which Cuomo went on the offensive and played by his own rules may have been slightly surprising and off-putting to some, as expected, the governor repeatedly tied Molinaro to President Donald Trump, who is deeply unpopular in New York. He called Molinaro an “extreme conservative,” invoking both Trump’s policies and Molinaro’s own voting record as a county and state legislator, including repeated votes against marriage equality and equal pay for women.

Molinaro has said he did not vote for Trump in 2016, but has been hesitant to explicitly criticize the president, a tack he held to during the debate, perhaps recognizing that he cannot afford to alienate the many Trump-supporting members of the New York Republican base and party leadership. Though he has mentioned it several times during interviews on the campaign trail, Molinaro did not offer to the debate audience that he did not vote for Trump in 2016, instead praising current economic conditions and asserting that he will criticize or support the president as warranted based on the interests of New Yorkers. He distanced himself from part of Trump’s tax reforms and the president’s child separation policy at the southern border, but appeared eager to talk about anything other than Trump, though he did argue that Cuomo had closer ties to Trump, mentioning, among other things, campaign contributions Trump has given to Cuomo in the past.

In perhaps the most memorable exchange of the debate, Cuomo repeatedly asked Molinaro if the Republican nominee supports Trump, which Molinaro would not answer directly, initially asking the moderators to move the discussion along as Cuomo hammered away after having turned a discussion about health care policy into a Trump test.

Molinaro’s frustration was evident, indicative of the broader challenge he’s facing running for governor of New York with Trump atop the Republican Party. However strong or distasteful Cuomo may have come across to individual viewers, the Molinaro campaign response to the debate was itself telling in terms of the governor’s command. The challenger and his aides focused on Cuomo’s ‘anger’ and ‘bullying,’ not any message Molinaro thought he was able to get across. Both sides appeared to see much of the same thing in the debate, with different interpretations.

On the flip side, the GOP nominee had perhaps his most clear and resonant criticism of Cuomo on corruption -- several members of Cuomo’s inner circle, including top governmental aides and campaign donors, have recently been convicted of criminal abuse of government involving the governor’s signature economic development programs.

“Governor, you have led the most corrupted state government in America. Eight individuals closely associated with your administration are now going to jail or have gone to jail for federal corruption charges,” Molinaro said. “At what point after eight years of being in office do you take responsibility? Or at least admit either you’ve benefited politically from it or you have no clue what’s going on within the administration.” He said Cuomo had allowed stealing from and defrauding taxpayers. “Anywhere else in America, no governor could possibly be running for reelection,” he said.

“You raised $101 million over eight years in exchange for $50 billion worth of state expenditures,” Molinaro added, before Cuomo gave his rebuttal.

The governor called the attacks “false and ad hominem,” but did not explain how they were false. He said at one point that, yes, members of his administration had been convicted and were being punished, but that he himself had never been accused of anything (he falsely said that federal prosecutors had said he did nothing wrong).

The governor sought to turn the tables, reiterating an attack his campaign has been using against Molinaro over a job Molinaro’s wife had gotten with a company that received Dutchess County contracts.

“For you to say in your situation, to point fingers -- yes, people in my administration made a mistake, they went to jail,” Cuomo said. “Your own county legislature is calling for an investigation on you for kickbacks and perjury, where you give a contract to a vendor and then a family member got a job and then they got another contract. That’s your own county legislature asking for an investigation of you, so I wouldn’t point fingers.”

Molinaro criticized Cuomo for shutting down the Moreland Commission to Investigate Public Corruption and pledged to launch his own if elected, saying he would appoint to it noted Cuomo critics Zephyr Teachout and Preet Bharara.

“You can’t possibly expect the voters of the state of New York to believe that you had no idea,” Molinaro said to the governor. “The exchange of state-funded, taxpayer resources for campaign contributions.”

“You know why the people would believe it,” Cuomo shot back, “because it was a two-year investigation and every U.S. attorney said I had nothing to do with anything, I did absolutely nothing wrong.”

“That’s not what they said,” Molinaro pointed out, before Cuomo went back to attacking Molinaro for a “kickback” he said is “a crime.”

During a telling moment, Lamb asked whether political discourse needs to be elevated, prompting a high-minded, bipartisan response from Molinaro about the good that can be done when people work together. Cuomo followed up by saying to his opponent, essentially, that's nice, you're terrible.

Throughout the debate Cuomo sought to portray Molinaro as “anti-woman,” referencing his voting record and the potential for the Supreme Court to overturn Roe v. Wade, which Molinaro called “settled” in saying he would uphold New Yorkers’ rights. He attempted to turn the tables on Cuomo by mentioning issues the governor’s administration has had with addressing sexual harassment claims, the fact that Cuomo excluded the only female legislative leader from negotiations of new anti-harassment policies, and a lack of public hearings on the issue of sexual harassment in what Molinaro called the “cesspool” of Albany state government.

On other policy-oriented matters, Cuomo and Molinaro did find moments of agreement: both would like to see the continued expansion of charter schools and medical marijuana, and neither expressed support for a state single-payer health care system -- Molinaro dismissed it as too much government requiring even higher taxes, while Cuomo avoided the question but said during his primary election debate with Cynthia Nixon that he’d favor such a program on the federal level, but does not think New York can afford to institute it. Molinaro indicated he wants to see a lot more local control over education. Asked about convincing Mayor Bill de Blasio to help provide space for charter schools, Cuomo joked that he and the mayor he regularly feuds with would figure it out over wine and pasta.

Molinaro reiterated his campaign pledge to significantly lower taxes -- he claims he can lower property taxes by “30 percent over five years” -- one of the major planks of his campaign, while Cuomo indicated he feels comfortable with his fiscal record, though he wants to find ways to trim spending and taxes. The governor falsely asserted that he has kept state spending to 2 percent annual increases, with Molinaro rightly pointing out that the growth has been higher, as pointed out by State Comptroller Tom DiNapoli and the independent Citizens Budget Commission. Still, Cuomo rightly said that he has had a moderate fiscal record that includes some spending restraint, though there was no discussion of the state’s significant outstanding debt, limited savings, and looming budget gaps. Cuomo touted his own record when Kramer asked him right out of the gate whether he would commit to slashing state spending by roughly 5 percent and pass the savings along to taxpayers.

Cuomo indicated a more liberal position than Molinaro on bail reform, though both said they want to see improved services for individuals with mental illness who often wind up in jail or homeless shelters, or living on the streets. He also said the state is studying the possibility of supporting safe injection sites for people addicted to heroin and opioids, something Molinaro said he is against. Cuomo indicated he would like to see the state's ethics watchdog, JCOPE, become a more independent entity, perhaps with fewer commissioners appointed by legislative leaders.

Molinaro criticized Cuomo for state parole board decisions to grant parole to individuals who have killed police officers, evaluations that Cuomo has said he disagrees with, despite appointing the board’s members, and for granting conditional pardons to tens of thousands of parolees, including sex offenders, so they can vote. Cuomo argued that the sex offenders involved have limited opportunity to be in schools to vote, but Molinaro said it was still too dangerous, and Cuomo broadly defended the program as a part of reintegrating those already released from prison.

On the MTA and New York City subway system, Molinaro said Cuomo “abandoned responsibility and we’ve seen it in a total death spiral over the course of the last several years.” He said the governor must “take ownership...take leadership responsibility” and that as governor he would clean house in MTA management, and work with the labor unions involved to identify savings that could then be shared among the unions and riders. He called the MTA “the most bloated public authority in the world.”

Cuomo asserted, “You have never seen a governor take more responsibility for the MTA than I have. I declared the state of emergency,” making a point that evokes the fact that the subway system had fallen into such a state on the governor’s watch.

Cuomo, who has a close relationship with the transportation workers union, downplayed calls for significant changes to MTA labor agreements, saying there is surely waste and it needs to be addressed, but that it wouldn’t yield the $30-$40 billion that the system needs to get into a state of good repair.

There was limited discussion of issues of concern to upstate voters, such as the struggling economies of certain areas of the state, some of which have seen significant population loss. An upstate-focused debate has been scheduled for November 1 by the League of Women Voters, with Molinaro and the three 'minor party' candidates for governor -- Green Party nominee Howie Hawkins, Libertarian nominee Larry Sharpe, and Stephanie Miner of the Serve America Movement -- all agreeing to participate. Governor Cuomo has not yet indicated his plans.