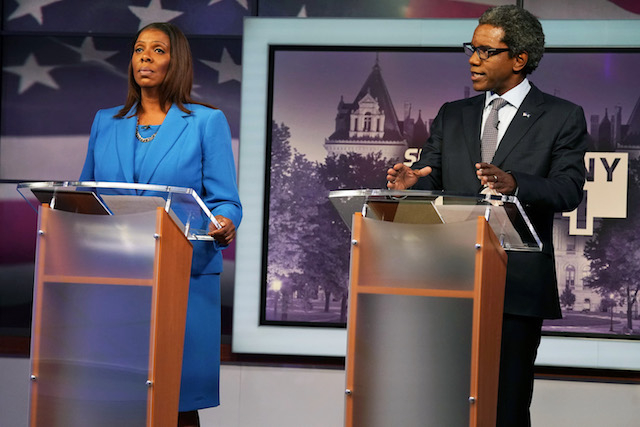 The two leading candidates to become New York State’s next Attorney General faced off in the sole televised debate of the race on Tuesday night, going back and forth about the role of the state’s top legal officer and the degree to which political considerations might affect the way they handle their duties.

New York City Public Advocate Letitia James, a Democrat, is the frontrunner in the race competing against Republican Keith Wofford, a Buffalo-native attorney who is attempting his first run for elected office. The seat became open in May when then-Attorney General Eric Schneiderman resigned in the wake of allegations of physical abuse by multiple intimate partners. His replacement, Attorney General Barbara Underwood, said upon her appointment by the Legislature that she would not seek election.

The hour-long debate, hosted by Spectrum News NY1 and moderated by Inside City Hall anchor Errol Louis and Capital Tonight anchor Liz Benjamin, saw James reiterate her history of public service, addressing the camera directly throughout as she repeated practiced lines from her campaign stump speeches. Wofford, on the other hand, spoke in more relaxed fashion and in the direction of the moderators as he sought to make the case that the next attorney general should not be a career politician but an independent professional. Both candidates are African-American, meaning that whichever wins would make history as the first African-American elected attorney general in New York. Other candidates who will be on the ballot, including Green Party nominee Michael Sussman and Reform Party nominee Nancy Sliwa, were not invited to the debate.

Unlike recent debates in the races for governor and comptroller, Tuesday’s one-on-one faceoff did not take any particularly nasty turns, though there was significant disagreement between the two, and also a few occasions for consensus.

James, who led Wofford by 14 points in the most recent public poll of the race from early October, drew a sharp contrast between her own experience and her opponent’s, pointing to his work as a corporate lawyer, his support for President Donald Trump, and his representation of clients on Wall Street who have an interest in seeing an attorney general’s office less interested in prosecuting financial crimes. “I live by one simple message and that is this, I believe in justice. Simple justice,” James said in her opening statement.

The two candidates differed on whether New York’s attorney general should challenge the policies of the Trump administration, which Schneiderman took an active role in and which Underwood has continued on multiple fronts. James promised to continue each of the lawsuits currently being pursued by the attorney general’s office, while Wofford did not.

“The key issue...is to look at how the policies impact the sovereignty and freedom of New York as a state and the state’s people,” Wofford said, emphasizing that he sees political motivations in many of the lawsuits initiated by Schneiderman and that the office should instead focus on areas that have a legal and economic impact on New Yorkers. For instance, he said the attorney general’s lawsuit against the nonprofit Trump Foundation “pales in comparison to the size and significance” of the potential wrongdoing in Trump’s financial and tax history, as enumerated in a recent New York Times investigation, which he said merits greater attention. He later also said he would drop the office’s lawsuit against ExxonMobil, which he said was an inappropriate use of taxpayer money to protect the company’s shareholders.

James insisted that the Trump Foundation lawsuit, as with others against the Trump administration and Trump family, is “not based on politics, they’re based on violations of the law.” She pledged to further pursue the ExxonMobil suit as well.

Coming so close on the heels of the mass shooting at The Tree of Life synagogue in Pittsburgh, James and Wofford also faced questions about whether it would be appropriate to call for the death penalty for the alleged perpetrator and about the president’s role in fomenting hatred across the country.

Wofford said it would be “consistent to have the death penalty in the same circumstances that the federal death penalty is allowed.” And though he agreed that Trump should tone down his rhetoric, he downplayed the president’s role in inciting division. “I disagree with putting it at the hands or the feet of the president...Certainly hate groups and white supremacist groups and anti-semitic groups long predate any particular politician on the scene today,” he said.

On the questions of independence and tackling corruption in Albany -- which James faced in the primary and that have largely formed the basis of Wofford’s campaign -- the two presented different visions. Wofford believes the office of attorney general can investigate corruption unilaterally while James has said referrals for many investigations must come from the governor’s office and that she will demand a standing referral to investigate public corruption if elected, while also pursuing legislation to further empower the attorney general.

Wofford listed several ways he would approach the issue, including in partnership with the state comptroller and district attorneys, and said he would also preemptively tackle corruption through the office’s civil authority rather than wait for criminal prosecution. He also criticized James for being the governor’s “hand-picked” candidate who could not sufficiently hold him and his administration accountable. “The fact of the matter is that my opponent Tish James is not going to go after her brethren and sisters who are Democrats, career politicians who have been riding around in limousines, benefiting their contributors and ripping off the public for years,” he said.

James, who insisted that rooting out government corruption is one of her top priorities, has emphasized that she would work with the governor and Legislature to enact ethics and campaign finance reforms, enhance the public integrity office under the attorney general, and work with the comptroller and district attorneys. She said the attorney general’s criminal jurisdiction is “circumscribed” and that she understands the office better than Wofford, having worked there previously. “All of my life, I’ve represented the powerless,” James said. “Mr. Wofford, all of your life you’ve represented the powerful.”

There were a few areas of agreement between the two, even if they argued on the details.

For instance, they both agreed to continue the state’s lawsuit over the inclusion of a citizenship question on the 2020 census and agreed that President Trump could not end birthright citizenship through an executive order, as he has threatened.

But James is a staunch supporter of immigrant rights who pledged to uphold protections for undocumented immigrants and fight Trump’s “regressive” policies. “We have to say loud and clear that immigrants are welcome here,” she said. Wofford, however, expressed clear concerns about illegal immigration and raised questions about the state risking the loss of federal funding by putting in place sanctuary policies to protect the undocumented by refusing coordination between state and federal law enforcement, as has been proposed in the state Assembly. “My view as the top law enforcement officer for the state is that you have to deal with public safety issues first,” he said.

Halfway through the debate, the candidates were given an opportunity to ask each other a question. James, specifically citing Trump’s ‘birther’ lie about President Obama, his bragging about sexual assault on tape, and calling Mexicans “rapists” when he launched his campaign, asked Wofford why he voted for the president. Wofford said his “simple reason” was that Trump spoke of increasing jobs and economic opportunity in struggling parts of America like his native Buffalo. At the same time, he attacked the “out of touch” coastal billionaires that he said largely fund the Democratic Party.

Wofford asked James whether she believes Cuomo’s denials about knowledge of the pay-to-play scandals that have marred his signature Buffalo Billion economic development program, and if she would investigate Cuomo’s administration if elected. James did not have a simple answer. “Andrew Cuomo is not running for attorney general,” she initially said, before defending her independence yet again. “I will follow corruption and I will follow the facts and the evidence wherever it leads me, to the White House, to the State house and to municipal governments all across the state of New York without fear and or favor,” she said, never directly answering the question.

The two also argued over the Martin Act, which gives the attorney general broad jurisdiction over Wall Street fraud and has been used liberally by New York’s recent attorneys general. James said earlier that the law should be strengthened and went after Wofford for taking large donations from Hank Greenberg, a Wall Street executive who has in the past run afoul of the Martin Act and is working to undermine it through the courts.

Wofford dismissed that those donations created any conflict, saying Greenberg’s case was long resolved and that the Martin Act had been used and abused by publicity-seeking officeholders who, instead of fighting for restitution for actual victims of fraud, had instead sought to make a name for themselves. Wofford has previously expressed concerns that recent attorneys general have contributed to a negative business climate in New York, driving away jobs and top earners.

James faced questions about whether she would apply that law to the real estate interests who have donated to her campaign for attorney general. James insisted, in response, that most of her donations have come from small donors and labor unions and pointed to her work as public advocate in taking on bad landlords in New York. She also said she would voluntarily ban donations from individuals with business before the attorney general’s office.

Wofford pounced on her answer, insisting that she already has donors who overlap with the governor and who have business with the state. “Career politicians do this all the time and the voters aren’t buying it,” he said.

Near the tail end of the debate, the two faced a lightning round of questions from the moderators. James said police disciplinary records should be released while Wofford said they should not. Wofford opposed supervised injection sites for those addicted to heroin and opioids, while James simply said she had concerns about them.

On criminal justice reform, the two also held varied positions. James said that cash bail should be restricted or eliminated, while Wofford said it should be reformed but with an eye towards the “dangerousness” of a defendant. Asked about their positions on Kalief’s Law, a form of speedy trial reform -- named for Bronx youth Kalief Browder, who spent years on Rikers Island without being convicted of a crime and later died by suicide -- they both seemed to agree on its intent. But while James said it was a step in the right direction, Wofford said he opposed the law because it did not go far enough and should be replaced with a more comprehensive, bipartisan legislation.

Earlier this year, the Legislature passed and the governor signed a first-in-the-nation bill to create a prosecutorial conduct commission, a move beset with legal questions given opposition from the district attorneys association. James said she supported the bill and that the Legislature could resolve any issues in the upcoming legislative session in January. Wofford mused at the notion. “I think that saying you’re gonna pass a law unconstitutionally and then undo the unconstitutionality is a fool’s errand,” he said.

James and Wofford shared similar views on the recent sexual harassment bills passed by the state Legislature and Cuomo this year. They both said said the new laws were inadequate and that the state should hold public hearings to solicit the input of survivors of harassment and assault to implement stronger protections; hearings that Cuomo and legislative leaders have shown no interest in.

This story has been corrected with the accurate names of the Attorney General nominees for the Green and Reform parties.