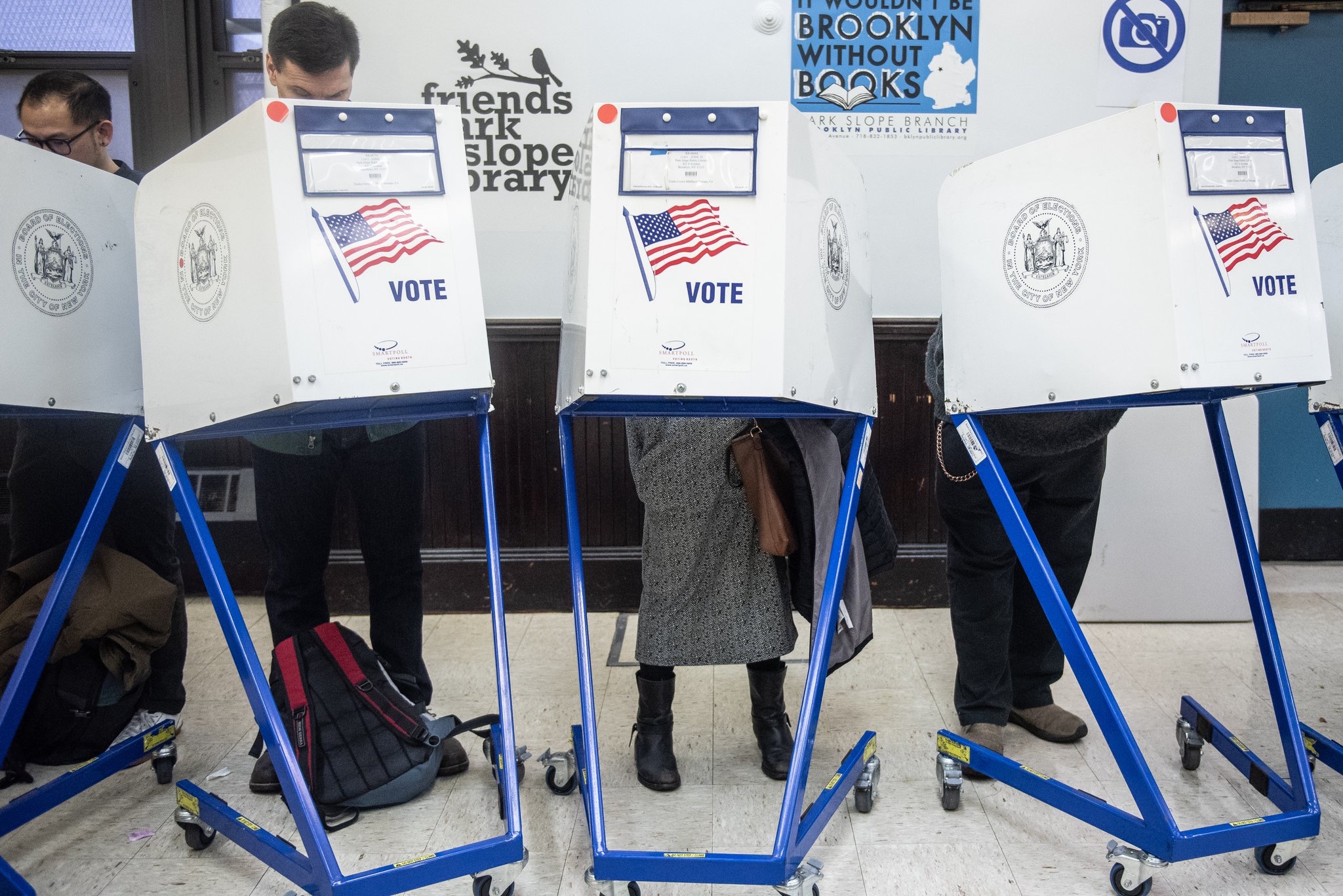 In concert with national trends, turnout in the 2018 presidential midterm election in New York smashed that of previous elections by significant margins. In a highly unusual development for a non-presidential election, statewide turnout approached 50 percent in the race for governor, in which Governor Andrew Cuomo easily defeated Republican challenger Marc Molinaro and others to win a third term.

As of Wednesday morning, the total statewide turnout (number of votes out of total registered voters, active and inactive) stood at 45.57 percent with 99.5 percent of precincts reporting, and a total of 5,790,035 votes cast for governor out of 12,706,050 registered voters across the state.

This marked a significant increase from turnout four years ago, which stood at 33.2 percent. Turnout did not, however, approach the levels seen in the 2016 presidential election, when it reached as high as 62.5 percent.

The nearly 5.8 million New Yorkers tallied to have voted by the state Board of Elections, a number only expected to go up as the final precincts report results and absentee ballots are counted, makes for a roughly 33 percent stronger turnout than in 2014, when 3.9 million voters showed up to the polls.

In New York City, as of Wednesday morning, the Board of Elections had logged 1,951,714 votes with 5,849 out of 5,901 precincts across the five boroughs reporting. This results in a citywide turnout of 38 percent; as typically occurs, this is lower than the statewide turnout. Nonetheless, turnout in the city increased significantly from the 22.7 percent seen in 2014, despite significant problems encountered at poll sites concerning ballot-reading machines that caused extensive waiting periods.

Michael Ryan, chair of the City Board of Elections, blamed inclement weather for dampening ballots, higher turnout, and the two-page ballot that many city voters had to use as a result of the number of elections and the charter revision questions. City Council Speaker Corey Johnson called on Ryan to resign, while Mayor de Blasio called for “top to bottom” reforms at the BOE.

Staten Island, with its high profile, competitive congressional race, saw the highest turnout of the five boroughs, at 42.8 percent. The heavily-Democratic Bronx, home to virtually no competitive local races, saw the lowest, at 32 percent. Those who did vote in the Bronx overwhelmingly went for Cuomo.

In the key State Senate race in District 22, the southern Brooklyn constituency where Democrat Andrew Gounardes appears to have narrowly defeated longtime Republican Senator Marty Golden, turnout stands at 36.5 percent with all precincts reporting -- roughly 62,600 voters turned out at initial count. Turnout in this district decreased significantly from Golden’s and Gounardes’ previous matchup in 2012, when 74,451 voters showed up to the polls and turnout stood at 48.25 percent. But 2012 was, of course, a presidential year, when turnout is nearly always higher.

Democrats identified the seat, situated in a longtime Republican stronghold that has become significantly more diverse in recent years and has been represented by Democrats in the City Council for years, as key to their quest to wrest control of the state Senate from Republicans. Democrats pulled that feat off in fairly spectacular fashion, going from a one-seat deficit to what might turn out to be a seven-seat majority.

Turnout was higher outside the city, as is typically observed: 3,838,321 non-city voters cast a ballot on Tuesday, for a turnout rate of 50.7 percent. This bested the 2014 non-city turnout rate of 39.9 percent by nearly 11 percentage points. Molinaro won most rural upstate counties by significant margins, losing in urban upstate counties and Tompkins County, where Ithaca is located. Cuomo won the suburban counties of Nassau, Suffolk, Westchester, and Rockland, all of which saw increased turnout rates similar to the state writ large. Suffolk, on Long Island, was fairly close, but Cuomo won it by about 20,000 votes. He even appears to have won on Staten Island, by about 1,000 votes.

Turnout in congressional races was down from 2016, owing to 2016 being a presidential election year, but was up across the board from 2014. The Staten Island-focused race, which had been a target for national Democrats and had seen an influx of outside cash and volunteers, had a 40.8 percent turnout, and Democrat Max Rose unseats incumbent Republican Rep. Dan Donovan but a surprising 53-47 percent margin. The race in the Hudson Valley 19th district, where Democrat Antonio Delgado dispatched incumbent Republican Rep. John Faso, saw a 55.2 percent turnout. The 19th was also a major target for national Democrats.

The unusually high turnout for a midterm election was undoubtedly largely fomented by President Donald Trump, the sting of his election for many Democrats and some independents, and the events of his nearly two years in office. Beyond reelecting the governor to a third term, the state elected an Attorney General who has promised to use the law to go after Trump, swapped several incumbent Republican members of Congress for Democrats, and decisively flipped the State Senate from Republican to Democratic control, largely thanks to Long Island seats home to many independent voters and giving Democrats unified control of state government for the first time in a decade.