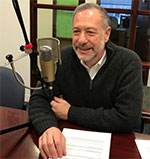 2040 is the year by which Governor Andrew Cuomo wants New York’s electric sector to go entirely green; that is -- to reduce carbon dioxide emissions in that sector of energy to zero. This is the key new goal announced by the Governor as part of the state’s “Green New Deal,” and it follows other ambitious environmental targets previously established. Seth Hulkower, Principal of Strategic Energy Advisory Services and author of a recent CBC report on New York's energy consumption, production and future, joined the podcast to discuss key related issues and his findings.

Listen to the conversation and let us know what you think: Ben Max of GG (@TweetBenMax), Maria Doulis of CBC (@MariaDoulis). Listen below or download wherever you get your podcasts, and subscribe to "What's The [Data] Point?"!