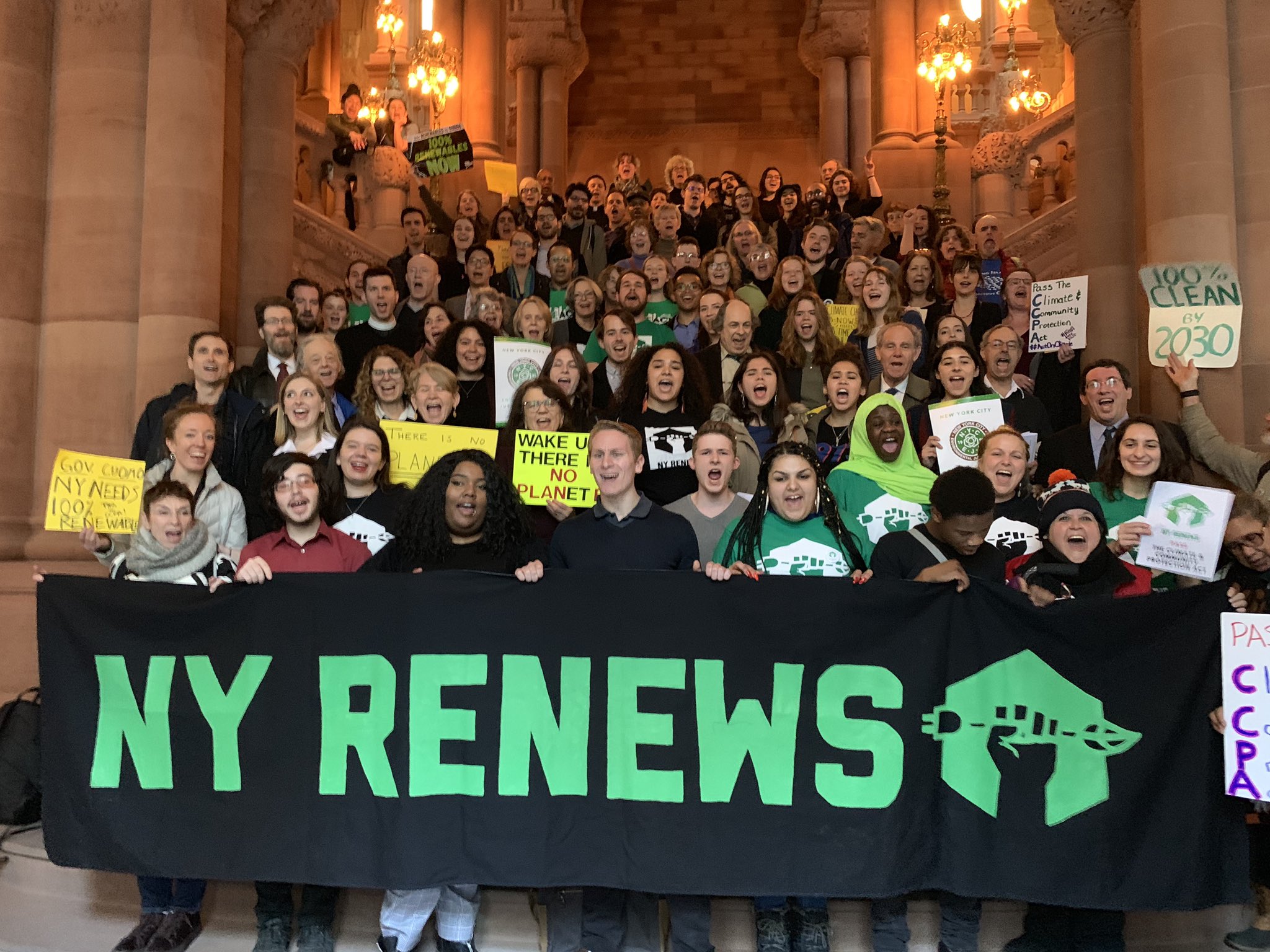 As Congressional Democrats pursue efforts to pass a Green New Deal at the federal level and Governor Andrew Cuomo has outlined his own version for New York, Queens State Senator James Sanders has proposed a pathway to implementing a more ambitious climate and green jobs agenda.

Proponents of the Green New Deal aim to eliminate the country’s reliance on fossil fuels and transition to 100 percent clean energy, creating thousands of infrastructure and renewable energy jobs in the process and in a way that prioritizes fairness for those communities most adversely impacted by harmful environmental policies. It’s been championed in the past by members of the Green Party, and recently by U.S. Rep. Alexandria Ocasio-Cortez, the rising Democratic star who represents Queens and the Bronx and is gearing up with Massachusetts Senator Ed Markey to introduce a non-binding resolution on the Green New Deal this week, details of which have begun to emerge.

Just as newly re-empowered House Democrats created a “Select Committee on the Climate Crisis” -- though without a mandate to look at the Green New Deal -- the New York State Senate could soon follow suit. State Senator Sanders’ bill would mandate the creation of a Green New Deal task force charged with crafting a “detailed statewide, industrial, economic mobilization plan” for New York to take the state to zero carbon emissions by 2030, a goal more ambitious than those recently proposed by Cuomo and by advocates and legislators backing a separate bill, the Climate and Community Protection Act (CCPA), which has languished in the state Legislature for years despite repeated passage by the state Assembly. The CCPA is part of Sanders’ vision for a New York Green New Deal. The 18-member task force his bill would empanel would have until the end of the year to send its report and draft legislation to the state Legislature and governor.

Cuomo, who has used executive action to mandate carbon emission reductions by 2050,  recently announced support for a Green New Deal as well but his “Climate Leadership Act” proposal stops short of others. In his executive budget proposal, presented at his State of the State address in January, he advanced legislation that would make the state’s electricity sector carbon-free by 2040. He also proposed a Climate Action Council to look at measures to reduce the state’s carbon footprint overall.

The CCPA, on the other hand, would aim to make the entire state economy carbon-free by 2050, not just the electricity sector. It also establishes a Climate Action Council, similar to Cuomo’s proposal but with a different, more democratic structure. The bill is sponsored by State Senator Todd Kaminsky and Assemblymember Steve Englebright, both Democrats. It was passed by the Assembly’s Environmental Conservation Committee, chaired by Englebright, on Tuesday and Kaminsky is holding a series of hearings on it next week. It also has the backing of New York Renews, a coalition of more than 160 organizations across the state that have been advocating for it for the last three years.

There are also two other legislative proposals with similar goals as the CCPA -- the Climate and Community Investment Act, which would enact a carbon tax to fund the transition towards renewable energy, and the Off Fossil Fuels Act, which would establish a 100 percent clean energy system by 2030, among other measures, on a faster timeline than the CCPA.

An official in Sanders’ office said that his task force proposal was modelled on Ocasio-Cortez’s effort to push for a House select committee, in an attempt to advance the conversation on the Green New Deal. Sanders has also co-sponsored the CCPA in the past and intends to support it this year as well. His new proposal, the official noted, mandates the shortest timeline and is the most progressive of the proposals.

Its supporters include the New York State Council of Churches, 350 NYC, Bronx Climate Justice North, The Climate Mobilization, North Bronx Racial Justice, Food and Water Watch, and prominent environmental scientists such as Stanford University Professor Mark Jacobson, Paul Hawken and Peter Kalmus, among others, the official said. The senator plans to rally for the proposal in the capital on Monday.

Mark Dunlea, co-founder of the Green Party in New York, said Sanders’ proposal would “go much further” than the CCPA with its longer timeline and would be much stronger than any proposal put forth by the governor. “I think [Governor Cuomo’s] concept of the Green New Deal is a branded slogan,” he said. “He can latch on to the Green New Deal as an economic stimulus program, which is good, but Sanders is going further than that, which is even better.”

But other environmental advocates want to see action immediately, rather than wait for a year from now after the task force would report. “The CCPA is still the most ambitious climate legislation out there...I don’t think that there needs to be any other interim step, this bill is the first step,” said Annel Hernandez, associate director at the New York City Environmental Justice Alliance, which is a part of New York Renews.

Hernandez pointed out that the CCPA also includes a guarantee that 40 percent of funds raised from new energy and climate regulations are directed to disadvantaged communities dealing with the effects of climate change. “[A]nything that is proposed by New York State has to be abiding by the principles of a just transition,” she said. “It means that those who are on the front lines of the climate crisis, of dealing with environmental burdens in their communities, have to be a part and leading the solution to the renewable, regenerative economy.”

A spokesperson for the governor did not have comment on Sanders’ proposal (Cuomo’s office rarely provides comment on pending bills) but did note the overlap between the Climate Leadership Act and the CCPA, which are bound to be issues negotiated with the Legislature as the legislative session proceeds, up to and after a budget deal is reached by April 1. The spokesperson speculated that the CCPA will likely not be approved in its current form, and may go through amendments following the Kaminsky-led hearings, after which a version of the bill acceptable to both lawmakers and the governor could come to pass.

Note - This article has been updated to clarify the provisions of the Off Fossil Fuels Act.