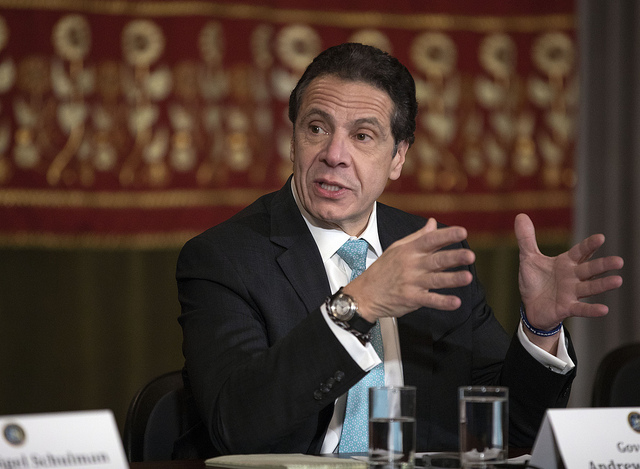 Governor Andrew Cuomo’s 2019 agenda includes a host of voting, campaign finance, and ethics reforms. Of three provisions related to government lobbying, one is spurring backlash from nonprofits, smaller advocacy organizations, and grassroots activists who feel threatened. Cuomo would like to require any individual or organization spending over $500 in a year on lobbying to be required to register as a lobbyist, lowering the threshold from $5,000.

The proposal is sparking outcry from nonprofit leaders and members, among others, who view the legislation as exclusionary of smaller organizations and unincorporated activist groups that do little formal lobbying and cannot afford the labor or time to navigate the state’s complex lobbying regulations. A letter from 15 New York nonprofits outlines vehement opposition to the new legislation. “Perversely, while this might increase the number of filings, it will effectively silence small groups while increasing the influence of big money in government,” the letter reads.

Signees include The Council of Family and Child Caring Agencies, the Hispanic Federation, Homeless Services United, the Jewish Community Relations Council, the Lawyer’s Alliance, the NYC Environmental Justice Alliance, and the NYC Immigration Coalition, among others.

In addition to lowering the registration threshold, Cuomo’s two other lobbying reforms include redefining “reportable business relationships,” i.e. compensation paid to individuals connected with lobbying, to those involving $500 or more, instead of the current $1,000.

The third provision would mandate a semi-annual report for lobbying expenditures exceeding $500, lowering the threshold from the current $5,000. Cuomo has included the three lobbying reforms in his policy book and Executive Budget, setting the stage for negotiations with the Legislature before a budget deal is due April 1 for the new fiscal year.

According to the governor’s office, his larger bill is a multipronged reform package. “It’s not just lobbying reform. It’s lobbying reform, and campaign finance reform, and independent expenditure reform, and voting reform, and procurement reform. It’s all related and we have an unprecedented opportunity to increase transparency and disclosure and improve our democracy for the better. The fact that some self-described reform groups are against reform speaks to the problem in better ways than I can,” said Rich Azzopardi, a senior advisor to Cuomo.

Co-signers of the letter believe the bill would limit their ability to participate in New York democracy, and some observers of state politics believe it is purposefully aimed at quieting Cuomo critics.

Jim Purcell, chief executive officer of the Council of Family and Child Caring Agencies, made the decision to add his organization to the letter. “It’s not a fundamental disagreement about accountability, but this is taken in a direction that’s unnecessary and burdensome,” he said.

Purcell gave an example of how quickly an individual can hit $500 in lobbying expenditure. “The train back and forth to Albany is $100. A cab is $20. An organization that spends one day a year lobbying or organizing a letter to support foster care for kids, it ends up feeling like you don’t want to hear from us.”

From a bigger picture perspective, $287 million was spent in 2017 on lobbying state government by 3,415 filers, per the latest available data from the Joint Commission on Public Ethics (JCOPE). Laura Abel, senior counsel for the Lawyer’s Alliance, an organization that co-signed the letter, said the top 100 filers spent 22 percent of the total amount, which translates to $63 million. By contrast, 390 filers spent less than $10,000.

“It’s a lot like election spending, where you’ve got a handful of really wealthy people and companies putting in most of the money. And then you’ve got a lot of small, really small spenders.” said Abel.

Reinvent Albany, a nonprofit watchdog that advocates for transparency and accountability at the state and city levels, also opposes the governor’s proposed lobbying reform. Its analysis, released last month, cites New York State’s 92 pages of lobbying regulations as “some of the most comprehensive in the country,” consisting of “carefully tracking and reporting compensation, expenses, hours spent lobbying, persons lobbied, and bills, executive orders, and procurement lobbied on in addition to potentially having to disclose reportable business relationships.”

Alex Camarda, a senior policy advisor for the organization, said “We think the benefits of the additional transparency are exceeded by the cost of burdens on smaller organizations.”

The burden of the legislation, if enacted, also goes in another direction. JCOPE commissioners during a January 29 meeting to discuss the governor’s proposed budget recognized what would be added responsibility for regulators. After the proposed legislation was read aloud, commissioner James E. Dering said, “Requiring lobbyists to spend $500 or more would precipitously increase the resources needed. One would hope if this is enacted there will be resources provided certainly at that time, but we may need resources in advance to gear up for that. It would be quite an increase.”

While many typically think of lobbying as done by high-powered for-hire firms, it takes many forms. As Purcell said, “I can hear someone saying ‘Lobbying is a dirty business, and I don’t want to do that,’ but if you want to have your voice heard, you have to visit your local official or go to Albany.”