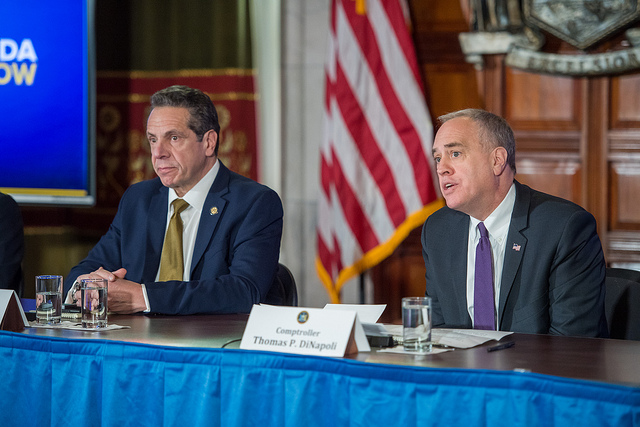 With a state budget due April 1 and several major question marks hanging over negotiations between Governor Andrew Cuomo and the state Legislature, State Comptroller Tom DiNapoli gave his latest assessment of New York’s economic outlook and key aspects of the budget picture. Appearing on WBAI radio’s Max & Murphy show on Wednesday, DiNapoli reiterated the concern over dips in state revenue, which he and Cuomo have attributed to impact from the new federal tax code and related taxpayer behavior.

The state’s chief fiscal watchdog also said more data is essential before making any final declarations, acknowledging that everyone will know a lot more once most of the tax returns are in next month. Yet, amid more uncertainty than in recent years state leaders must craft a new budget well before the April 15 tax deadline, a fact that has prompted some, including Cuomo, to revisit the notion of moving the state fiscal year to start in June or July, something DiNapoli said is worth taking a serious look at.

On that question and others, DiNapoli gave his typically cautious answers, not taking a definitive stand on several issues on the negotiating table. DiNapoli noted that he does not have a seat at that table, but that his job is to evaluate the budget that is agreed upon by those who do, namely the governor and the two houses of the Legislature.

In January, DiNapoli and Cuomo announced that the state fell short of its projected revenue by $2.3 billion. He partly blamed geopolitical uncertainty regarding President Trump’s tumultuous trade war with China, turbulent Brexit negotiations, and stock market fluctuation. But more so, DiNapoli held the 2017 federal tax overhaul responsible, which instituted a cap on individuals’ ability to deduct state and local taxes from federal taxes and significantly impacts New York due to the high taxes at the state and local levels.

Much of dip in state revenues “had to do with a change in taxpayer behavior,” DiNapoli said. “Particularly the cap on local and tax deductibility.” He added that the state has already regained losses from down financial markets in December, but advised waiting to draw definitive conclusions.

“We probably need more data from the Department of Tax and Finance,” he said. But DiNapoli also attributed some losses to ultra-wealthy residents fleeing the state, echoing Cuomo, but, also like Cuomo, not yet able to offer definitive proof. “One percent of New York taxpayers carry 46 percent of the personal income tax revenue that comes to the state,” he reminded.

“If you lose even a handful of those billionaires or multi-millionaires,” the state will feel the difference, he said.

“The next time we’ll have more solid numbers is in April and the budget is supposed to be done by April 1,” he said. “Which begs the question of whether to change the fiscal year.” While DiNapoli admitted “there’s a logic to it,” considering most other states either begin on July 1 or run on a calendar year, he said “the likelihood of that reform happening anytime soon is probably wishful thinking.”

“New York is still in a strong position,” he said. “I would hope that April would see some rebound in the collections. We don’t know that for sure.”

As the state budget is finalized, DiNapoli voiced moderate support for a pied-à-terre tax system, which would tax high-value homes in New York City that are not the owners’ primary residences. “We’re setting a threshold at $5 million,” he explained. “If you can afford a $5 million pied-à-terre, you can probably handle additional levels of taxation.”

He spoke to indecision in the state legislature regarding further measures to raise revenue and the notion that a plan to legalize and tax recreational marijuana may not be included in this year’s spending plan. “There was never an expectation that marijuana legalization was going to bring in money in the coming fiscal year,” he said. The hosts and the comptroller also noted that congestion pricing for Manhattan’s central business district may also not happen, despite widespread agreement that it is needed, both to help declutter the streets and to raise revenue for mass transit.

“At this point, you have some very different sets of priorities about how to” raise revenue within the state legislature, DiNapoli said. He emphasized that under a plan put forth by Assembly Democrats, upper income New Yorkers would pay higher taxes, but the Senate majority and Cuomo appear against that path, though all agree on extending the current “millionaires’ tax” that is soon to otherwise expire. “Under the Assembly’s proposal, they would add three new higher tax brackets,” he explained. “They estimate that would raise $1.3 billion, in addition to that pied-à-terre tax.”

The question of how Cuomo and legislators will raise new revenue and cautiously budget based on the projected revenue forecast will continue to be essential to budget negotiations over the next two weeks or so.

On the always contentious topic of education aid from the state to localities, DiNapoli said agreement is often challenging because “what is equitable very much sits with the eye of the beholder.” He said it is indeed worth considering recommendations from the Citizens Budget Commission and like-minded experts who say that the state should not continually increase aid to all local school districts, but only target aid to the neediest districts.

DiNapoli was also asked about the status of work he’s overseeing to use the state pension fund toward the fight against climate change.

DiNapoli said that he had had a conference call that day with individuals involved in his Decarbonization Advisory Panel, which is evaluating ways to further use state investments to influence the world’s biggest polluters. DiNapoli, who has resisted calls to divest the pension fund from fossil fuel companies, said a plan will be forthcoming in the next couple of months. The panel’s stated goal is “how to best decarbonize the pension fund in a way that will secure retirement for hardworking New Yorkers and help support the overall health of the state’s economy and protect our environment for generations to come,” according to the governor’s office. DiNapoli said that this week based on pressure from the pension fund, Dollar General and Under Armour both agreed to formulate plans to reduce their carbon footprint.