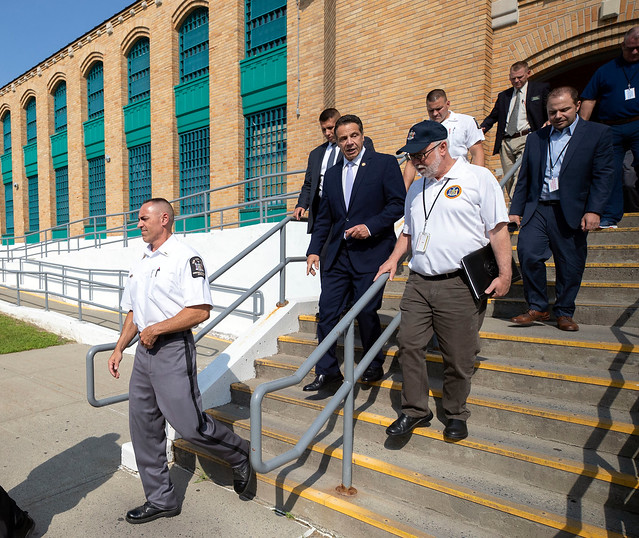 As focus on the 2020 Census intensifies, one key aspect of the discussion is how the population count will impact legislative representation and redistricting. Along with new congressional districts -- New York stands to lose at least one if not two seats in the House of Representatives -- the state will also redraw its legislative districts for the State Senate and State Assembly, along with local legislative bodies.

One important and controversial element in both the population count and the subsequent redistricting in the 2010-2012 cycle was the location of state prisons and how prisoners were counted in the Census; specifically, whether prisoners are counted as residents of the location of the prison they are held in or of their prior home address.

Prison populations had significant impact on local counts and therefore district lines, particularly in some of the more rural areas where most state prisons are located. At the same time, state prison population in New York has been on the decline since 1999, when it was at a peak of 71,649 prisoners. Now, that number has fallen to 46,973 prisoners, according to a press release from Governor Andrew Cuomo.

Up until 2010, the Census counted prisoners in the districts they were incarcerated in, despite most of them coming from New York City and Long Island, according to data from the New York State Legislative Task Force on Demographic Research on Reapportionment (LATFOR), which has oversight of the redistricting process.

The prison count has had a significant impact on redistricting within New York, adding to the population of certain regions of particular importance for State Senate seats. While the Assembly has been dominated by Democrats for decades now, the Senate has largely seen a very close split between Republicans and Democrats. Republicans controlled the Senate for most of the past decade, including during the 2012 redistricting, until this year -- Democrats won a fairly large majority in last year’s elections.

When Democrats last had control of the Senate, briefly in 2009-2010, a controversial bill was passed amid the 2010 Census mandating that prisoners are counted based on their last known home addresses.

The 2020 Census count will begin in April of next year, without full clarity on the prison count question. Prison populations can have significant impacts on how district lines are drawn, and those lines can greatly influence legislative balances of power.

In 2010, many State Senate districts in upstate New York were underpopulated relative to other districts, giving upstate voters more influence over their representatives than voters in overpopulated districts downstate, including in New York City, where voter power was deflated. When taking away the prison population of seven of those upstate districts, they became severely underpopulated, further inflating upstate voters’ power, according to the Prison Policy Initiative.

Senate District 45, which includes Clinton, Essex, Franklin, Hamilton, Warren and Washington Counties, had one of the highest prison populations, 14,161, as of 2007, according to the Prison Policy Initiative. Taking away that prison population, the district had almost 30,000 fewer residents than the 2010 average population per district of 312,550, according to the Center for Urban Research at the CUNY Graduate Center.

Prison population counting also affected redistricting on a local level in places like Rome, New York. According to information from the Prison Policy Initiative, in Rome’s second ward, half the population counted in the census was incarcerated, inflating the local non-incarcerated population to double its actual size. Thus voters in Rome’s second ward had roughly twice the influence they would otherwise demand; prisoners are not allowed to vote in New York.

Some upstate populations inflated by prisoners meant that more funding and political attention was allocated to predominantly Republican communities, in part through districting, helping the party hold a firmer grasp over the State Senate.

New York changes how the census counts prisoners
In 2010, several non-profit groups including The Brennan Center, The Prison Policy Initiative, and Demos rallied against the way prisoners were being counted, calling it “prison-based gerrymandering.”

They strongly advocated for a bill (S6725A) sponsored by then-State Senator Eric Schneiderman, a Manhattan Democrat (who went on to become New York Attorney General, a position he resigned from in 2018 amid a domestic abuse scandal). The bill required incarcerated people to be counted based on their home residence and not based on the address of the prison where they are incarcerated.

This legislation was passed, along with a provision postponing the deadline for prisons to report inmates’ home addresses from July 1 to September 1. It was introduced as an amendment to the New York State revenue budget bill in August 2010 -- four months after the 2010 Census count had begun in April.

Almost 80 percent of the state’s prison population was then successfully recounted based on inmates’ last known addresses. The state prisoners whose addresses were not identifiable, as well as all federal prisoners, were not taken into account when determining legislative districts.

The legislation mostly stopped upstate communities from gaining additional political influence and resources based on housing prisons. At the time, the move was hotly contested, but it has not been discussed much since.

Justin Levitt, currently a law professor at Loyola Law School, who then served as counsel at The Brennan Center for Justice, believes redistricting was made fairer as a result of the legislation. “In the districts where there are prisons, the surrounding communities are represented by their representatives, but the people who are artificially stuck in that neighborhood are represented by legislators in the areas where they are from,” he said in a phone interview.

Opponents of the change
The legislation faced fierce opponents, many of whom were legislators in districts home to prisons. Senator Betty Little, a Republican representing counties including as Clinton, Franklin, Essex and Washington Counties in Northern New York, was one of the senators most strongly against the legislation.

Senator Little’s district housed 13 state and federal prisons in 2009, although three of those have now been shut down based on New York Department of Corrections’ prison maps. The new method of counting prisoners meant that her district would have to be redrawn to accommodate more people so that it was not severely underpopulated.

Little filed a lawsuit in April 2011 against the Legislative Task Force for Research and Reapportionment (LATFOR), a task force set up by minority and majority leaders of the Senate and Assembly to determine district lines. The lawsuit aimed to strike down the prisoner counting legislation. She lost in Little vs LATFOR.

The plaintiffs argued that the legislation was unconstitutional, did not correctly count inhabitants, and that the method of counting inmates did not line up with what was recommended by the U.S. Census Bureau. The New York Supreme Court ruled that the legislation did not obstruct the constitution beyond a reasonable doubt. It also determined that prisoners’ addresses at the prisons should not be viewed as permanent. The ruling also quoted Census Bureau Director Robert M. Groves, who said that states may count prisoners however they please.

Today, Senator Little still argues her case. “My contention has been that incarcerated individuals should be counted where they are serving their sentence, their 'usual residence,' not where they are from and may or may never return," Little told Gotham Gazette via email. "Where they utilize services is where they should be counted because the allocation of resources for these services is often apportioned based on representation and population."

Efforts Since 2012 Redistricting
Jeffrey Wice, who has served as counsel to Democrats during state legislative redistricting, and is currently a fellow at SUNY Rockefeller School of Government, is concerned that New York may go back to counting prisoners in the districts where they are incarcerated as 2022’s redistricting process approaches.

However, a spokesperson from Governor Andrew Cuomo's office sounded definitive, saying of prisoners: “They will be counted as part of their home districts.”

What next?
The impact of counting prisoners in the census, wherever they are located or tallied, is decreasing as the prison population is decreasing.  In the new state budget, the Legislature agreed to allow Cuomo to shutter up to three more prisons, the number will depend on which prison beds are identified for elimination given the declining inmate populations. It’s unclear how the closure of two or three prisons may impact the populations in other prisons, where some inmates may be transferred.