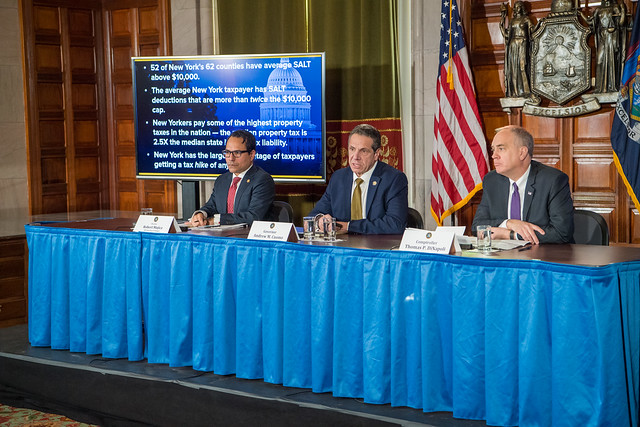 New York’s tax revenue fell by $3.7 billion, a 4.7% decline, in the 2019 fiscal year that ended March 31, according to the cash report released Friday by State Comptroller Tom DiNapoli. A drop was expected in projections made last year, but not to the degree it occured, setting off alarm bells earlier this year as the state started to see apparent effects of New York taxpayer behavior resulting from the new federal tax code. The state's latest projections from February did, however, more accurately account for the decrease in revenue as the fiscal year came to an end.

The drop in revenue largely stemmed from lower personal income tax receipts, though the comptroller said the year ended on “a positive note” because revenues came in higher than expected in March. Part of the decline was also related to the MTA payroll tax, which brought in $1.4 billion last year, being shifted out of the budget as a revenue source, and the new federal tax law led to many filers and employers moving their payments to the 2018 fiscal year, creating the appearance of a  drop in payments that doesn't reflect the larger economy, according to the state Division of Budget. But fiscal watchdogs are nonetheless concerned that the state could quickly face a cash crunch if revenue is lower than expected in April, the month that not only starts the new state fiscal year but is also home to the tax filing deadline.

The drop in personal income tax was first evident in data from December and January, raising a red flag for the state economy and creating uncertainty about future spending as Governor Andrew Cuomo and the state Legislature negotiated the budget for the 2020 fiscal year. In a February news conference called to discuss the startling numbers, Cuomo and DiNapoli pointed to the 2017 federal tax overhaul as the culprit, chiefly a provision that capped the deductibility of State and Local Taxes (SALT) at $10,000 and how New Yorkers may be responding to it. They said much more would become clear in the following months.

The governor and Legislature had to take that uncertainty into consideration when making revenue projections for the new fiscal year and that if those projections are significantly off they may need to restructure the state budget.

The comptroller’s latest report noted that personal income tax revenue by the end of the fiscal year declined by $3.4 billion in total, or about 6.6% from the previous year, though other forms of tax revenue increased, including consumption tax, business tax, and miscellaneous revenue that included massive monetary settlements with financial and other corporations. March was a good month, with taxes coming in about $812 million higher than the state Division of Budget had projected in February.

“After months of concern over lower-than-expected tax collections, the state ended the fiscal year on a positive note,” DiNapoli said in a Friday statement. “The sharp revenue declines in December and January, however, remind us to take nothing for granted. With expectations of a slowing economy and ongoing concerns regarding federal fiscal policies, a strong commitment to building robust reserves in preparation for the next economic slump is essential.”

After a recent allocation of $250 million, the state’s current rainy day reserves stand at $2 billion, and are expected to increase to $2.5 billion by the end of the 2020 fiscal year. This sum pales in comparison to the recently-adopted $175.5 billion state budget for the fiscal year 2020.

The crucial period lies ahead as the state begins to take stock of tax returns that New Yorkers file in April. In February, the governor and state DOB projected that April would show an additional $1.4 billion in personal income taxes, and total collections of about $8.2 billion. In comparison, the state averaged between $5 and $7 billion in April tax revenues between 2016-2018. It’s not totally clear why the projection is so optimistic.

“When they made that adjustment in February, they said, we came in really low for January, but some of that money we think is gonna come in in April. And we don’t know if it’s going to or not,” said Dave Friedfel, director of state studies at Citizens Budget Commission, a nonprofit watchdog. “If it doesn’t, if they made a mistake in making that assumption, then suddenly the fiscal year 2020 budget could be in trouble only one month into the fiscal year.”

Should revenues come in below projections, the state could be in for tough times ahead.

“Depending on how that number comes in, if it’s significantly short, the state may need to tighten its belt a little bit further,” Friedfel said, noting that at minimum it would put a damper on conversations around increasing capital spending as the rest of the legislative session progresses. Cuomo and legislative leaders passed the new state budget without adding new capital expenditure plans, though many were carried over from prior plans.

E.J. McMahon, research director of the Empire Center for Public Policy, a think tank, agreed that if the April revenue doesn’t meet expectations, it would be “a sign of trouble.”

“However, even if it’s above the forecast, it’s not necessarily solid proof that things are much better because...the real number to watch this year, that has a bigger reflection of the economy, will be the quarterly estimated payments in June and especially September,” he said, pointing out that higher-earning New Yorkers have more complicated tax returns and may be filing for extensions.

The new budget does give the state Department of Budget, which is under the governor, the ability to make mid-year changes to spending in case of a $500 million deficit below projections, in which case the Legislature would have 30 days to respond or the DOB adjustment would take effect.

But a bigger issue is the state’s paltry reserves. CBC’s Friedfel said the state should at bare minimum have 10% of the operating budget in reserves, closer to about $10 billion. “That would be enough to really absorb the shock for one year and even more than that would be beneficial,” he said.

“The state has gotten about $12 billion in monetary settlements over the last six or seven years, certainly during the governor’s tenure, and they’ve put very little of that into reserves,” Friedfel continued. “They’ve actually used some of that for operations which sets up kind of a higher base of spending, which makes it harder to fill those gaps in the future.”

Note - This article has been updated to clarify that the state Division of Budget's latest projections did expect revenues to drop as much they did though they did not originally. Additional context was also added about the MTA payroll tax and early filing of payments in the 2018 fiscal year.