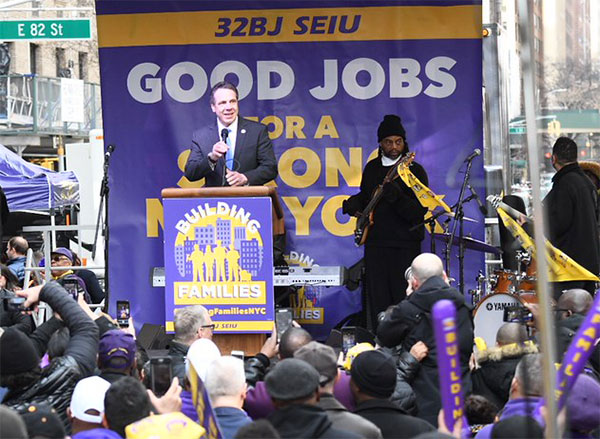 Governor Andrew Cuomo, a third-term Democrat, has in recent weeks repeatedly lashed out at state legislators from his own party and a long-time labor ally, 32BJ SEIU, as he points to the role of independent expenditures in state politics amid questions about his own fundraising habits and commitment to campaign finance reform.

The prominent building services workers union was in Cuomo’s corner when he was running for reelection in 2018 and also supported his attempt to push through the deal that would have brought a new Amazon campus to Queens, among other initiatives. But Cuomo seems to have soured on that relationship because of the union’s push for public financing of state elections and its ties with State Senator Alessandra Biaggi, a young progressive who has been a vocal critic of the governor’s fundraising tactics after unseating a long-time ally of the governor, Jeff Klein, the former senator and leader of the Independent Democratic Conference.

Last month, Biaggi was among three state legislators who criticized Cuomo for holding a big-dollar fundraiser as the state budget for the new fiscal year was being negotiated. As reported by the New York Times, several attendees of the fundraiser were seeking favorable state action in the budget and Cuomo even invited his budget director, Robert Mujica, to the Manhattan event. To Biaggi and others, it reeked of impropriety or at least the appearance of it.

Cuomo, in turn, lambasted Biaggi and the others, as well as the Senate Democratic conference at large, for holding its own fundraisers during budget season. In the backdrop were negotiations around campaign finance reform, including creating a new system of public financing, which eventually was not included in the adopted budget though the Legislature and governor created a commission that would issue recommendations to create such a system. 32BJ was one of the leading voices in a large statewide coalition called Fair Elections for New York, which made a major push for public financing, including protests outside the governor’s office.

On April 9, appearing on WAMC’s Roundtable with Alan Chartock, Cuomo made his displeasure clear. “The hypocrisy is, the members who have stood up and criticized the fundraising, they themselves are doing fundraising,” he said, pointedly calling out the Democratic Senate Campaign Committee. And taking a veiled shot at Biaggi, he continued, “Many of those members were funded with millions of dollars of dark money, from unions like 32BJ. Where is the public financing spirit, you know?”

He went on to repeatedly name 32BJ, and only 32BJ, as he talked of the corrosive effect of outside spending in elections.

There’s much more context behind Biaggi’s election, a former lawyer in the Cuomo administration who ascended by emerging victorious in a September 2018 primary election against then-Senator Klein, the powerful former leader of the breakaway Democrats who helped keep the Senate under Republican control for years. Klein’s conference reunited with the mainline Democrats in April last year, in a deal brokered by Cuomo, only for six of its eight members to be defeated in the primaries by challengers like Biaggi.

As part of the reunification deal, Cuomo and sitting Democratic senators agreed not to support primaries against fellow Democrats, meaning Cuomo and Klein supported each other’s reelection. Klein, running while under investigation for allegedly having forcibly kissed a former aide (he denies the accusation), used an image of himself and Cuomo on campaign literature, though the governor never offered a formal endorsement.

The IDC under Klein’s leadership played a moderating effect on legislation, which allowed Cuomo to pursue an agenda of compromise between Democrats and Republicans and push through many of his own priorities. Biaggi’s victory over Klein -- in which he spent nearly ten times the money her campaign did -- was boosted massively by 32BJ, whose endorsement was seen as a crack in the unity facade.

The union donated thousands of dollars to her campaign, sent volunteers to her district, and also supported her with a nearly $80,000 independent expenditure campaign through its Empire State 32BJ SEIU PAC. That political action committee, and its spending to help elect Biaggi, appears to have Cuomo perpetually bristling, especially given the union’s role in the Fair Elections campaign.

“Unions like 32BJ are fighting for fair wages and safe working conditions. Big businesses and real estate interests often act to protect profits over people,” Biaggi said in a statement to Gotham Gazette. “We all know the true political currency of our time is people. I'll stand with the hard-working people of 32BJ every time.”

Cuomo doesn’t seem as willing. At an unrelated news conference last Wednesday, according to a New York Daily News report, Cuomo’s ire again seemed to have been provoked as he addressed recent tweets by State Senator James Skoufis, the new chair of the committee on Investigations and Government Operations, who said that state contracts were regularly being handed out to firms that made large campaign contributions to the governor. Cuomo, in turn, implied that independent expenditures to state legislators’ campaigns were directly linked to legislation being introduced in Albany, which seemed to be directed at Skoufis’ support for a bill regarding home-rental services like AirBnB, which spent half a million dollars to help Skoufis get elected.

Cuomo said, “I don’t think there’s any difference between Airbnb and 32BJ and charter schools or REBNY or the teachers unions, but this is where the money is coming from and it’s coming for a very specific purpose.”

The governor’s repeated sling at 32BJ, which has more than 160,000 members across the country, mostly in New York, was again an odd inclusion among multi-million dollar firms and business interests, not to mention the teachers unions that he has often warred with during his tenure, finding something of a ceasefire in recent years.

32BJ was one of Cuomo’s most prominent backers in his reelection race last year, crediting him with “a long and strong record of progressive policies” including the passage of a $15 minimum wage, paid family leave, and a $19 minimum wage for airport workers. The union donated the maximum $65,000 to his reelection race, and has contributed almost $150,000 to his campaigns since 2007.

A week after the union endorsed him in early April 2018, it also withdrew from the Working Families Party, which was backing Cuomo’s primary opponent at the time, education activist and actor Cynthia Nixon. That same week, Cuomo spoke at a 32BJ rally in Manhattan.

“32BJ is one of the best unions in the United States of America,” Cuomo proclaimed on stage, praising its leaders for helping pass the policies that earned him their endorsement. “You have to deal with the real estate industry, which is one of the toughest industries in this country, and 32BJ is up to the fight...and what I love about 32BJ...they don’t just talk, they deliver.”

In February, Cuomo was championing New York’s winning bid to bring Amazon and its projected 25,000 jobs to the state by building a new campus in Long Island City. Despite the tech firm’s checkered history of opposing unionizing efforts by employees, 32BJ was behind him, seeing the promise of jobs for its union members through building service contracts and the potential for broader unionization gains. After Amazon cancelled its plans, 32BJ President Hector Figueroa called it “a missed opportunity to engage one of the largest companies in the world and to create a pathway to union representation for one of the largest groups of predominantly non-union workers in our country.”

The governor’s office denied any ulterior motives behind his more recent comments and declined to further explain the specific targeting of 32BJ. “I know you guys have trouble fathoming this, but not everything is some conspiracy. Sometimes the truth is the truth,” a Cuomo spokesperson said in an email, before not responding to additional inquiries.

Amity Paye, a 32BJ spokesperson, said the union was surprised by the governor’s remarks. “We weren’t clear what prompted him to do this,” she said in a phone interview. “We responded on social media to the comments but we haven’t had any direct conversations about this with the administration. We wouldn’t presume to guess why this happened.” She also pushed back against the union’s mention among groups like REBNY and AirBnB as independent spenders. “There’s not a comparison. We’re not a multimillion dollar corporation. The money we invest literally comes from thousands of members pooling their money. It’s entirely different,” she said.

As Paye noted, Alison Hirsh, political director of 32BJ, called the governor’s comments “perplexing” in a tweet on April 17, just after he railed against the union at the press conference, and Figueroa also responded that same day. “Any Dem leader should understand there’s a world of difference between worker organizations such as unions and corporations/employer associations & that it isn’t hypocritical to push for campaign finance reform while benefitting from IE. Both NY Senate Dems AND @NYGovCuomo have.”