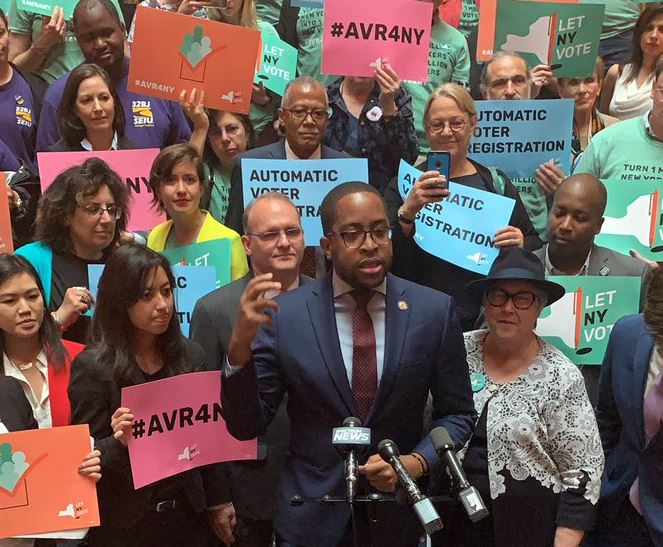 Following several reforms to the state’s election and voting laws that were passed by the state Legislature and signed by Governor Cuomo earlier this year, the New York State Senate’s elections committee seems poised to move ahead with legislation to implement a system of automatic voter registration.

At a public hearing on Thursday in Albany, the elections committee, chaired by Democratic Senator Zellnor Myrie of Brooklyn, heard testimony from experts, election officials, voting reform advocates, and immigrant advocates, all of whom agreed that New York must implement automatic voter registration (AVR). The hearing came just after a crowded and energetic rally in the capital, led by the Let NY Vote coalition, at which legislators of both houses and advocates called for passage of AVR.

The key questions apparent on Thursday were whether AVR has support in the Assembly and from the governor, and what type of AVR system should be adopted -- a split opinion was clear at the hearing, which was called in part to help sort out the different proposals.

In 2016, Oregon was the first state to approve AVR, and since then, 17 other states and the District of Columbia have also adopted the system. In New York, which has consistently ranked low on voter registration and turnout, Myrie said AVR is “critically important to our democracy.”

“My goal is to bring New York from worst to first,” he said, with reference to the package of bills passed earlier this year, which included an early voting program set to launch this fall.

There have been several bills on AVR introduced this legislative session in the Senate and Assembly. Besides massively increasing the number of registered voters in the state -- roughly 2 million New Yorkers are eligible to vote but not registered -- AVR also promises to reduce the costs of election administration, make voting more efficient, and expand access for the state’s most vulnerable populations including low-income communities, people of color, and young people.

It would also complement the many reforms that the Democratic-controlled Legislature passed this year, including early voting, pre-registration of 16- and 17-year-olds, and portability of voter registrations The Legislature also consolidated the state and federal primary and approved the use of electronic poll books, and crossed one of three thresholds for other reforms, including same-day voter registration, that require a change to the state constitution.

The State Board of Elections showed its own split on the idea of AVR. In testimony submitted to the committee, Todd Valentine, the BOE’s Republican co-executive director, said, “Forcing inclusion against the voter’s will is an act of a top-down government. And saying that there’s an ‘opt-out’ clause is really flipping the script on free choice – the choice is made – you are in. This violates a citizen’s basic free speech rights, which includes expressing displeasure
with the electoral process by not participating.”

Robert Brehm, the Democratic co-executive director, who testified in person, supported it. “Certainly, automatic voter registration is an important reform,” he said, also hinting at the disagreement within the Board. “We have a bit of an ideology issue there,” he said.

Dustin Czarny, an elections commissioner in Onondaga County, and chair of the Democratic Caucus of the New York State Elections Commissioner Association, called AVR an “egalitarian benefit” and said the Legislature must pass it to build on the successful reforms from this session. “I’m here to caution against the feeling that maybe we’ve done enough, because we can never have done enough when it comes to voter access,” he said.

Though there was generally consensus at the hearing about the benefits of AVR, the panellists testifying before the committee disagreed over whether AVR should be implemented through a front-end or back-end system, or some hybrid of both.

In a front-end system, voters that interact with specific state agencies for different purposes – such as the Department of Motor Vehicles – would be automatically given the option to register to vote and choose one or no party affiliation, or opt out. In a back-end system, the state would use databases of New Yorkers maintained by different agencies to determine who is eligible to be registered and transmit that information to the state Board of Elections to add them to the voter rolls. The BOE would then inform those individuals by mail, giving them the option to choose their party affiliation or to opt out and not be added to the rolls.

Of the states that have passed AVR, only Oregon and Alaska implemented a back-end system. But both approaches have their weaknesses, experts said.

A back-end system could inadvertently enroll ineligible individuals such as undocumented immigrants and legal non-citizen residents, which could open them up to deportation or threaten their chances of obtaining citizenship. It could also enroll voters who want to maintain their confidentiality, such as survivors of domestic and sexual abuse.

Voters would also not be immediately affiliated with a party, which could lead to confusion because of New York’s closed primary system and early deadlines for switching party affiliation -- nearly six months before a primary. Voters, particularly in New York City, tend not to respond to mailers from the BOE, which means they could miss the opportunity to fix any issues with their registration.

But a front-end system would require agencies to ask an individual about their eligibility and citizenship, a fraught question particularly in a state with a large immigrant population among whom the federal government under President Donald Trump has created an atmosphere of heightened fear.

Other experts and advocates raised concerns about the lack of training among agency personnel about registration procedures and the dearth of accomodation for people with limited English proficiency. At an agency point of service, under constraints of time and with other priorities in mind, individuals could make mistakes.

Sean Morales-Doyle, counsel in the Democracy Program at the Brennan Center for Justice, warned against a back-end system. “We don’t want people getting registered without knowing it,” he said, insisting that an AVR system should have protections for vulnerable communities and that it should be implemented through multiple agencies, including the DMV, which already processes voter registration applications.

But Susan Lerner, executive director of Common Cause New York, said her organization tended to prefer the back-end system and emphasized that there are ways to filter information on voting eligible New Yorkers without adverse consequences. For instance, she noted that the Department of Health serves a far broader population than the DMV and has more than 6 million people registered for Medicaid, which tracks their status. “So we’re not asking the agency to ask citizenship questions that they’re not already asking,” she said.

It is often noted even under the current registration system that centering the DMV favors suburban and rural areas over urban centers given that city-dwellers are less likely to interact with the DMV.

Lerner urged the committee to ensure several provisions in any bill that passes, including creating a working group of agencies and advocates to study which agencies are best to implement AVR, ensure the security of collected data, and to require regular reporting on how the system is being implemented.

Morales-Doyle, Lerner, and others generally agreed that AVR should involve multiple agencies, and that some flexibility should be built into the legislation to allow more agencies to implement it.

Sean McElwee, founder of AVR Now and co-founder of Data for Progress, also supported a back-end system, noting that from analysis of Oregon’s program, 44% of those registered through AVR cast a ballot in the 2016 election. “In the Oregon system, more than 90% of people do not opt out, so they’re either added to the rolls or have their registrations updated,” he noted. “In Colorado, prior to switching to a back-end system, only one in three people chose not to opt out.”

Senator Michael Gianaris has introduced a bill that would implement back-end AVR, and he argued at the hearing that he would rather put the onus of a registration system on the government rather than individuals. His bill contains a safe-harbor provision that would prevent an individual from being liable for a mistake in the state voter rolls. “An error in the statewide voter registration list shall not constitute a fraudulent or false claim to citizenship,” his bill reads.

But immigration advocates weren’t reassured by the provision, noting that federal enforcement agencies do not give immigrants the benefit of the doubt in such cases. “They do not weigh intent. They do not weigh method of registration,” said Amy Torres, director of policy at the Chinese-American Planning Council.

That sentiment was shared by Wennie Chen, senior manager of civic engagement at the New York Immigration Coalition, and Monica Vargas-Huertas, deputy northeast director of NALEO Educational Fund. “Errors that can cause serious negative collateral consequences are more likely to go unnoticed until it’s too late in a backend system,” said Vargas-Huertas.

With eleven session days left in the legislative year, the Assembly has yet to even discuss the issue of AVR. “We will talk about it with our members,” said Mike Whyland, a spokesperson for Assembly Speaker Carl Heastie, in an email.