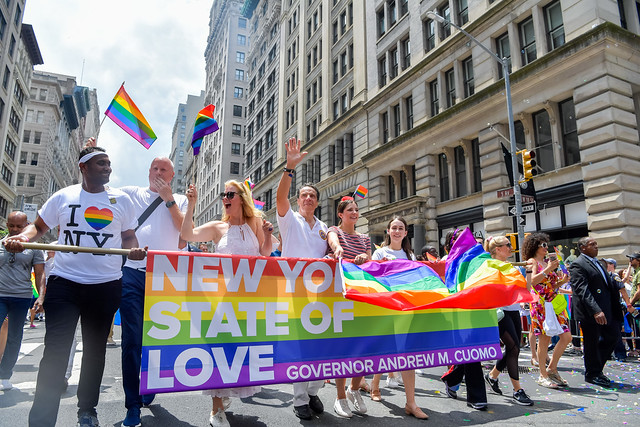 The state Senate embraced the notion that the civil rights protections enshrined in the New York state constitution should be more inclusive when it decisively passed an expansive version of an equal rights amendment Monday.

The Senate’s amendment goes a step farther than other equal rights amendments by expanding the equal protection clause of the state bill of rights to outlaw discrimination not only based on sex, but also on sexual orientation, gender identity and expression, national origin, ethnicity, age, and ability. Currently, the state constitution only prohibits discrimination based on a person’s “race, color, creed or religion.”

“Today, we further the fight for justice for women by moving this crucial amendment forward. At the same time, we are standing up for the rights of the LGBTQ community, the elderly, and the disabled,” said Democratic Senate Majority Leader Andrea Stewart-Cousins in a statement.

The amendment, which had unanimous support in the Senate (it passed 62-0 in the 63-seat chamber), differs significantly from the version that passed in the Assembly in February, namely on the number of protected classes added and language clarifying the meaning of “civil rights.”

The Assembly’s version, which also passed with a groundswell of support, simply adds the word “sex” to the equal protection clause, extending constitutional protections to women but no further. These differences will have to be reconciled for the amendment to advance.

Governor Andrew Cuomo made passing an equal rights amendment that would ban discrimination based on sex a top priority this year, including it in his “2019 Justice Agenda” released in December, and listing it at the end of May among ten priorities identified for the final stretch of the legislative session, which is scheduled to end this week.

Unlike other state law changes, which simply need to pass both chambers of the Legislature and be signed by the Governor, amendments to the state constitution must be passed by two consecutive Legislatures and then be approved directly by voters via ballot referendum. The current Legislature was sworn-in in January to a two-year term, meaning the second passage of the amendment would have to take place in either 2021 or 2022 in order for it to be put before voters in a referendum. The earliest the amendment could go into effect is late 2021, if it is passed this year or next, then again in 2021 by both houses of the Legislature and voters.

A number of the protections in the Senate’s equal rights amendment are already contained in the state’s Human Rights Law, including for gender expression thanks to the passage of GENDA earlier this year, but putting them in the state constitution makes them stronger.

“Generally when things are listed in the equal protection clause there’s a standard of review that’s attached to constitutional principles that do not attach to statute,” said Alphonso David, the governor’s counsel, at a press conference on June 3.

The Senate’s version, by defining the phrase “civil rights,” would also make the constitutional provision self-executing, meaning protections for individual civil rights won’t have to be affirmed in subsequent legislation, as is currently the case.

The Equal Rights Amendment to the U.S. Constitution was first introduced in 1923, but has never been ratified. Since then, 11 states have adopted equal rights amendments that protect women’s civil rights, according to a press release from state Senator Liz Krueger, a Manhattan Democrat and the amendment’s main sponsor in the upper chamber. “New York is not one of those 11 states. No state has explicitly granted equal rights to LGBTQ people or the disabled,” the press release reads.

At the June 3 press conference, the governor said he would support an expanded version of the amendment in the future but didn’t believe the Assembly would pass one in the final days of the legislative session.

“I am totally open to, in the future, adding other classes -- which is what the Senate wants to do. But let’s achieve what we can achieve today and where we have agreement today,” Cuomo said at the press conference, referring to the addition of “sex” to the amendment.

He blames the uncertainty of the amendment on the “failed Albany game” of feigning support for a concept but falling short of passing legislation. With different versions of the amendment on the table, much of the political heavy-lifting of securing majority support in both chambers lays ahead even as nearly everyone agrees equal rights protections should be broadened.

“There’s 11 days left,” Cuomo said on June 3. “Pass that bill. Next year, come back and I fully support expanding the class even greater.” This is “the old Albany formula for failure. Assembly wants to do this, Senate wants to do this, nothing happens.”

“I don’t believe we can get agreement on it this year in 11 days,” Cuomo said of an expanded amendment.

Discussions are ongoing to bring the equal rights amendment closer to passage.

“We are continuing to urge colleagues in both the Assembly and the Senate to search for common ground.  We will see when the dust clears how much more work has to be done,” said Assembly Member Rebecca Seawright, in an email to Gotham Gazette. Seawright, a Manhattan Democrat, is the main sponsor of the narrower version of the amendment that passed her chamber in February, and also of a broader companion to the Senate’s amendment.

With the clock ticking on the session, the governor has said his focus now is on the passage of other marquee reforms, namely expanding the prevailing wage and legalizing recreational marijuana, but a host of issues are finding resolution among the Senate, Assembly, and governor’s office, and an end-of-session “big ugly” omnibus bill could be in the works, with untold number of aspects.

“Fortunately we have until the end of next year's legislative session to get first passage in both houses in order to stay on schedule with the amendment process,” said Justin Flagg, communications director for Krueger.