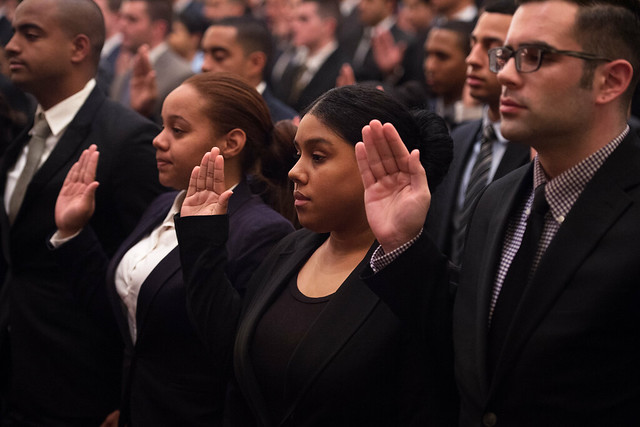 “In some ways, we are all victims of corruption,” Huguette Labelle told attendees of the Global Cities III conference Thursday morning, giving opening remarks at the two-day event organized by Columbia University’s Center for the Advancement of Public Integrity. The event brings together leaders and ethics officials from major cities across the world, including New York City and Barcelona.

Labelle was the board chair of Transparency International, a non-governmental organization with the mission of combating global corruption with chapters in over 100 countries. She delivered the keynote address Thursday in Manhattan, making a direct connection between corruption and a lower quality of life for citizens. Corruption, Labelle said, “manifests itself with poverty around the world and a lack of essential servings, creating a barrier for justice to take place and regulations to be implemented.”

More directly, she declared “corruption is a crime against humanity that has many faces.” Labelle’s speech and the ensuing panel discussion, which featured Carolyn Miller of the New York City Conflicts of Interest Board, considered several contemporary problems and best practices for public integrity.

A recurring theme, brought up by Labelle and other speakers, was the need for transparency in governmental contracts with private businesses. Transparency can be beneficial for both good government purposes, but also for the businesses that seek these contracts. She told the audience, “businesses are victims [of corruption], too.” One proposal that she said worked well in other countries was “getting businesses to publish what they pay” as part of winning government contracts.

She used an example of a Norwegian company doing business in an African country. A governmental official asked the company for a bribe to ensure that they were awarded the contract. When the company informed the official that Norwegian law would require them to publicize this as part of their transparency law, “that was the end of discussion” regarding the bribe.

Corruption in the process for awarding contracts for infrastructure projects can cost taxpayers up to 50% more than what the project would normally. “This means that the quality of the infrastructure is not what’s required,” Labelle said, which will lead to infrastructure lasting for shorter periods of time and requiring frequent costly repairs.”

In the ensuing panel discussion entitled “Effective Ethics Systems for Local and National Governments and Intergovernmental Organizations,” four integrity officials from New York City, the United Nations, Barcelona, and Cape Town discussed what they do well and what challenges they face in the positions.

Gemma Clavert, the director of the Transparency Agency of the Metropolitan Area of Barcelona, said that while her agency is officially independent of the government, “really it’s not correct” because her agency’s budget is set by the officials she is tasked with holding accountable.

“In order to be effective, we need autonomy,” Calvert said, adding that independence is impossible “if you depend on another service the bigger structure.”

New York City’s 2019 Charter Revision Commission recently put forward a proposal for independent budgeting for the Public Advocate and the Borough Presidents, elected officials who are supposed to at least in part act as checks on the mayoral administration, which largely determines the city budget. There has also been discussion about the need for the city’s Conflict of Interest Board (COIB) to have independent budgeting. COIB currently relies on the Mayor and City Council, whom the board is tasked with overseeing, for its funding.

COIB monitors potential conflicts of interest and enforces the ethics code for New York City’s over 325,000-person workforce, from the Mayor to City Council to Department of Sanitation workers, teachers, and beyond.

Miller, COIB’s executive director, said, “it’s a challenge to reach so many people,” for training and educating city employees about potential conflicts of interest. Noting the wide variety of jobs in city government, one of Miller’s biggest challenges is “getting humans in a room.” She pointed to teachers and sanitation workers as two professions where schedules and work conditions do not allow them to take time out of their day for a training on conflicts of interest.

Elia Armstrong, the director of the U.N. Secretariat’s Ethics Offices, said that her office recently saw a spike in the volume of sexual harassment reports it received after it conducted a series of training sessions on the issue. She said this is emblematic of a trend where reports for a particular issue area often spike in the aftermath of her office providing training on that issue.

“One of the things we’re most proud of,” Miller said, was the promptness with which COIB responds to requests for ethics advice. She brought up the board’s attorney-of-the-day hotline, where the public can receive legally-binding conflict-of-interest advice from a staff attorney. The board receives 400-500 requests for advice per month, through phone calls and emails, and most of those are answered within the same day, Miller said.

Armstrong noted how important that is because officials often wait until the last minute to seek counsel on potential conflicts. She said many U.N. officials, for example, wait until the day before a speaking engagement to check with the ethics office to see if there may be a conflict of interest, putting her office in a difficult position.

Miller also spoke about the need for confidentiality when giving advice to public officials. It is necessary for officials to have a “safe space,” where they feel that they can go to seek ethical advice, or the system would not work. “The only way people feel they can be transparent is confidentiality,” Miller said.

“There’s the political world to deal with” when fighting corruption, noted Marianne Camerer, the director of the Building Bridges Program at the University of Cape Town’s Nelson Mandela School of Public Governance. For example, she said, the Mayor of Durban, South Africa, Zandile Gumede was suspended from office over corruption charges relating to a waste management contract. Her supporters then marched, demanding that she be reinstated.

Comparing that case with New York City, Miller said “the kinds of desperate ethical issues we deal with are city employees wanting to take free tickets” for baseball games. Instead of marches in the streets, COIB faces “the righteous indignation of someone who can’t take free Yankees tickets.”

When asked by the moderator about New York City being a “one-party town,” Miller said that “even though New York City is mostly Democrat, there are only so many positions” and “ethics can become political” when politicians seek to distinguish themselves from the competition, so confidentiality is important, because COIB does not want to influence the political process.

Miller also noted some emerging trends in the types of conflicts-of-interests cases her office reviews. Social media use, second jobs, and political speech rank among the top issues that COIB currently contends with.

With the rise of ride-hail apps and similar services, many city employees seek out permissions from COIB to work part-time as Uber or Lyft drivers, for example, as a means of earning a supplemental income.

Additionally, city employees are prohibited from using their offices for political purposes. This means that they should not be promoting political causes from their official social media accounts.

A question Miller said that the board often faces is “what is political and what is policy?” She gave an example of a public official speaking out against the federal government’s immigration policy as an example of a gray area for this rule. Just in the last several days, two City Council members requested that COIB investigate Department of Education officials’ involvement in a press conference in support of Schools Chancellor Richard Carranza organized by the City Council’s Black, Latino and Asian Caucus (BLAC).

COIB will have to decide if DOE officials were supporting Carranza’s policy or engaging in political activity, although the investigation request itself has been seen as political. As Camerer noted at Global Cities, “there’s a whole politics to this” and all four panelists noted that integrity investigations can be difficult when they overlap with political battles.

Frequently, throughout their panel discussion, the four integrity officials commented that they would seek to incorporate ideas that their peers on the panel had discussed. Armstrong expressed admiration for COIB’s attorney of the day hotline and fast response time to advice requests, saying that she would like to implement both at the United Nations.

In her opening remarks, Labelle told the audience that there are many current challenges to public integrity, from the “shrinking space of civil society and the media” to the withdrawal in “commitments to international treaties” to “A.I. and big data becoming both part of the solution, but also a facilitator of all types of corruption.”

She said “the rule of law remains a top priority,” but said that “the other part is enforcement.” It is not simply enough to have strong anti-corruption laws on the books, but those laws must be properly enforced to be effective, she said.

In discussing the myriad of problems that currently threaten public integrity, all of the speakers appeared to agree on a common theme, expressed by Camerer, that “ethics needs to come back on the agenda.”

Tags: Ethics • Conflicts of Interest Board