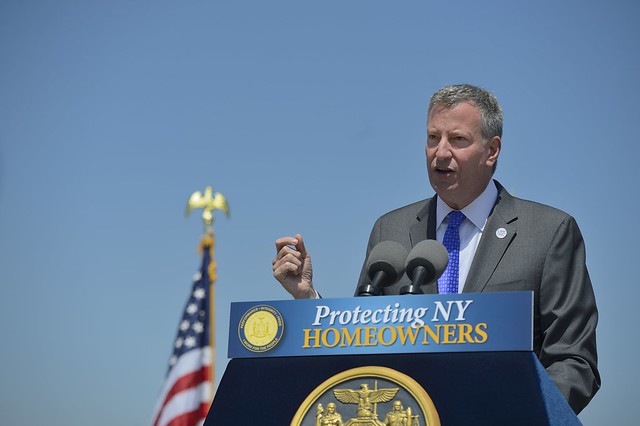 This is the third and final part of a three-part series on New York City's antiquated and unfair property tax system, its complications and inequities, the underway task of reforming it, and prospects for the future.

Read part one - Taking on the Difficult Task - here.

When Mayor Bill de Blasio and Council Speaker Corey Johnson announced the creation of an advisory commission to come up with reforms to the city’s antiquated property tax system (much of which is controlled by state law), they said their focus would be on fairness while maintaining the city’s largest revenue stream.

The revenue from New York City property taxes was a whopping $27.8 billion last year, roughly a third of the city budget, and it helps fund everything from basic government administration and social services to the mayor’s signature initiatives like universal pre-kindergarten, including the salaries and benefits of hundreds of thousands of municipal workers.

Property owners see their taxes rise every year, squeezing nearly everyone -- though not evenly or fairly. Elected officials across the board have expressed interest in changing the system. But to make a more rational property tax system and still fund extensive city services at or near their current levels, officials will have to navigate the murky waters between the public interest and that of each individual taxpayer.

How skillfully that is done will dictate the political consequences that follow, and whether promised soon-to-be-proposed reforms to the property tax system actually have a chance to pass through the New York City Council and State Legislature.

‘A Substantial Constraint’
“One of the hard things about the whole property tax system: changing things is always going to impact someone else. If you move things for one tax class -- because we’re trying to stay revenue neutral -- it inevitably means changes for a different tax class,” Marcy Miranda, a spokesperson for the mayor’s office, told Gotham Gazette.

Some experts have asked why, if the commission’s purpose is to create a more fair and equitable system, is it constrained by the mandate to leave the city’s revenue untouched?

“It is definitely a substantial constraint. And I think that is being driven more by city fiscal concerns than it is by questions of how to structure the tax and what is the best tax,” Ana Champeny of Citizens Budget Commission told Gotham Gazette.

Roughly two-thirds of the city’s revenue comes from taxes, a little under half of which is property taxes. During a panel discussion about economic growth in New York City in May, former Commissioner of City Planning Carl Weisbrod said the city’s vast provision of social services and recent changes in federal tax policy mean, “increasingly, we are dependent on our own ability to generate revenue.”

Mark Shaw, co-chair of the city’s property tax commission, the initial recommendations from which are expected soon, views the revenue mandate as a gesture to those anxious about the prospect of reforming a system so integral to private and public life in New York.

“The veil of revenue neutrality over the debates for the commission is actually a way of making it clear to any of the interested parties of the public that this is not a back door way of trying to increase property taxes,” Shaw told Gotham Gazette.

But the mayor’s executive order establishing the commission, which reflected an agreement with the City Council, does not mention revenue neutrality, exactly. It only says the commission’s recommendations “shall not result in a reduction of revenue.”

The Frozen Tax Rate
State law sets the property tax classes, along with the assessment standards and growth caps, but the city -- the City Council with the mayor’s approval -- controls the tax rate. Since fiscal year 2009, the mayor (Bloomberg, then de Blasio) and City Council have agreed to keep the overall tax rate frozen. Because of very strong growth in the city’s real estate market, however, property taxes have continued to rise and generate more and more revenue.

This has allowed the city budget to grow significantly over the past two decades. Spending under Mayor Michael Bloomberg reportedly rose 31.6 percent above inflation during his three terms in office. Since de Blasio took office, the city budget has grown by more than $20 billion overall, up to the $92.8 billion expense budget for the current fiscal year.

“If the tax commission came up with reforms that adjusted the assessed values, the Council and the mayor could set a tax rate that didn’t have a revenue implication for the city, but it might raise the rate,” said Champeny of CBC.

Given how sensitive the subject of taxation is in New York City, raising the tax rate could come with political fallout. “Obviously that would be pretty unpopular if someone were to come in and make that change,” said Miranda from the mayor’s office.

The rates the city sets on the assessed value of the property in each class, known as the “class shares,” are supposed to adjust each year to reflect changes in the market but growth caps set by the state limit how much a class share can increase, according to Champeny. The city has the discretion to redistribute any increases above the cap to other tax classes.

In most years recently, the City Council has requested lawmakers in Albany lower the cap for homeowners, shifting increases onto commercial and utility properties. “The class shares protect [homeowners] slightly but also there’s been sort of this political choice by elected officials in the Council and the state Legislature -- and the mayor to some extent because they don’t oppose it -- to make sure that the levy growth does not fall too much on Class 1,” Champeny said, referring to one- to three-family homes.

“Each annual adjustment doesn’t necessarily shift a lot, but over ten, twenty years, it does accumulate,” she added.

Balancing the Equation
The purpose of the Advisory Commission on Property Tax Reform is to weigh all of these factors -- equity, rationality, what the state controls and what the city can do, the unintended consequences for owners and renters, transparency in the system -- and come up with recommendations for improvement. The result could be the kind of fundamental, planned restructuring of New York taxation that some had hoped would happen following the Hellerstein case in 1975; or piece-meal, band-aide solutions like the ones New York ended up with in the years after.

“We're going to...go at the heart of the property tax problem and have a commission, working closely with the Council, to try and reform fundamentally the property tax to be more fair for everyone,” Mayor de Blasio said in April 2018 when he released the executive budget that year.

In 1975, Judge Solomon Wachtler, writing the majority opinion, was concerned with the “remarkable powers of endurance” of the practices that prompted the Hellerstein case. Their survival depended largely on the machinations of politicians and officials servicing particular constituencies, factors “none of which are particularly commendable,” he noted in his decision. Over the years, those factors have multiplied and become more interconnected. Any changes of substance now will implicate the entire system, and any balance struck toward making it “more fair for everyone,” as de Blasio said, may not be what everyone wants.

This is the third and final part of a three-part series on New York City's antiquated and unfair property tax system. Read part one - Taking on the Difficult Task - here. Read part two - Deep and Complex Inequities - here.