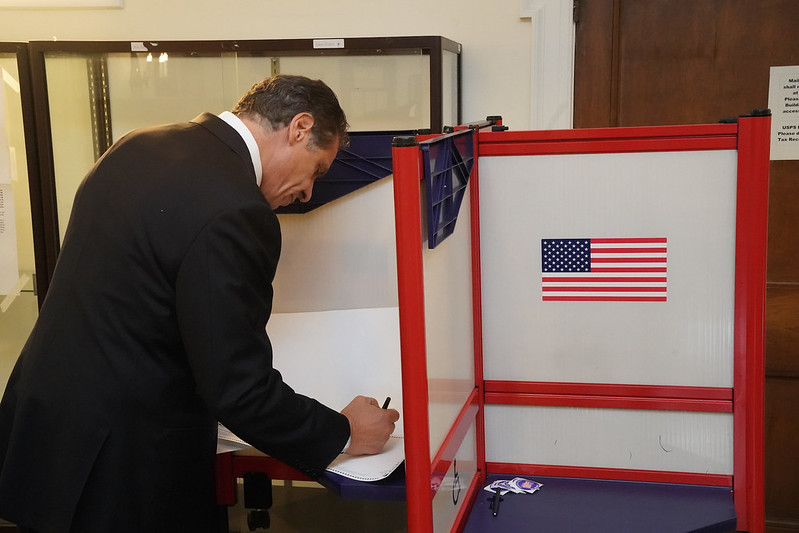 Few New York elections go by without controversy, and this year’s relatively quiet slate has been no exception. As voters head to the polls during the inaugural early voting period and heading into Election Day, one major question that came up during the June primary continues to hang over the general election.

A bill that could change the way provisional affidavit ballots are counted as soon as this year is languishing in Albany, having passed both houses of the state Legislature in June. The bill would make it harder to disqualify those ballots on technicalities if the intention of the voter is clear, thus keeping some number of voters from disenfranchisement.

The legislation was the subject of controversy during the Democratic primary for Queens District Attorney earlier this year, a race that was decided in a recount, with many affidavit ballots left uncounted. While it’s unclear if any general election race, in New York City or elsewhere in the state, will be anywhere near as close, the bill would impact whether some votes are counted.

“The bill protects otherwise-eligible voters from having their ballots thrown out on highly-technical, unfair grounds. Had it been signed in a timely way after passage on June 12 and 13, this protection would have been in place for the June primaries and the 2019 general election,” said Jarret Berg, a voting rights lawyer and elections watchdog.

“Instead, the safeguard is either being ignored or intentionally delayed as elections they would help to improve come and go," he said, adding that the law would go into effect immediately and wouldn’t cost the state or localities anything to implement.

Caitlin Girouard, a spokesperson for Governor Andrew Cuomo, told Gotham Gazette Tuesday that the legislation was “under review.” As of Thursday, it had not been sent to the governor by the Legislature or called to his desk by Cuomo, the two mechanisms that would force the governor’s decision to sign or veto it much more quickly ahead of the final December 31 deadline.

Registered voters in New York City have the opportunity this fall to cast ballots for public advocate, Queens District Attorney, a Brooklyn City Council seat, some judicial positions, and five referenda containing proposed amendments to the city charter. For the first time in New York State, polls are open during a nine-day early voting period, which began October 26 and ends November 3. Election Day is Tuesday, November 5.

After the primary polls closed in June and the close race headed toward counting absentee and affidavit ballots, Queens Borough President Melinda Katz and public defender Tiffany Cabán, along with their respective teams of lawyers, fought over reinstating ballots disqualified by the city’s Board of Elections. As a recount unfolded, one major question became which affidavit ballots would be counted and which wouldn’t, a debate that often starts with the envelope containing the ballot.

Appearing before a judge, lawyers for the two candidates argued over validating discounted ballots, often discarded on the basis of minor technical errors, like failing to put a return address on the ballot envelope or not listing a previous address, despite a qualified voter making a clear vote in the race.

Many of the disqualified affidavit ballots were believed to favor Cabán, while absentee ballots, often cast by older voters, favored Katz, in part due to targeted campaigning by the borough president. Cabán supporters pushed for Cuomo, a Democrat, to sign the affidavit ballot bill during the recount in hopes of preserving more of those votes. Legislators passed the bill weeks before the primary election, but the governor would not sign it after the ballot counting had begun. Cabán ultimately lost by about 60 votes, with more than 350 potential votes uncounted, according to a court filing related to the race.

“With that portion of the election cycle over, it is my hope that the governor gets this legislation on his desk and signs it before November 5 so that those ballots can be appropriately considered under what is a much more reasonable standard,” said Assemblymember Kevin Cahill, a Hudson Valley Democrat and one of the bill’s sponsors.

"We are very supportive of this bill and believe that where a voter's intent is clear, their ballot should count,” wrote State Senator Zellnor Myrie, a Brooklyn Democrat who chairs the Senate Elections Committee, in an email to Gotham Gazette. “The will of the legislature is clear from the passage in both houses so it is our hope, given the importance of every election, that the bill is signed as expeditiously as possible."

Leroy Comrie, the bill’s Senate sponsor, did not respond to requests for comment.

Affidavit and absentee ballots are placed in individual envelopes and have “a variety of other circumstances associated with them that could put them at risk of being considered technically flawed,” said Cahill. One of those circumstances is the fact poll workers hired by the city Board of Elections often advise voters on how to fill out affidavits, according to Cahill, which he says makes it unfair to penalize ballots for technical errors.

Voters use affidavit ballots when they believe they are registered to vote but are not found in the voter rolls at a poll site. Roughly 2,800 affidavit and 3,400 absentee ballots were reportedly cast in the high-profile Democratic primary for Queens District Attorney.

As it became clear the vote was close and headed to a recount, some called on Cuomo to sign the legislation and allow more votes to be counted. Part of the concern, expressed by some, in enacting the legislation before the recount had finished was that it would change the rules of the game by which voters and the poll workers often advising them had been operating.

“The rule is the rule,” Cahill said.

“We wouldn’t want to be impacting a result, after the fact. That wouldn’t be fair,” he added, in apparent reference to changing the rules of how certain votes are counted after they’ve been cast.

Given that Cuomo did not sign the bill before early voting began, the same issue is now at play for the general election. Generally speaking, the legislation is not seen as beneficial to particular candidates, but many believed more affidavits were likely to be for Cabán than Katz in the Queens primary because she appeared to be the favorite of newer, younger, more transient voters who may have been more likely to have to fill out an affidavit ballot.

“This legislation is not a partisan issue, nor does it help or hurt any particular candidate or party in any given election, and it has already passed both houses,” said Berg.

“It’s not that radical a bill,” Cahill said, “it really is just a common sense piece of legislation that says…[a voter] should be permitted to have that vote counted notwithstanding some minor technical differences between what that ballot says and what the law requires.”

The decision to send a bill to the governor for enactment is, practically speaking, a collective one among the Assembly, the Senate, and the governor’s office, according to Cahill. The chamber that first passes a two-house bill is responsible for sending it to the governor’s office; if it is sent to the governor and not signed or vetoed within ten days, in most cases it becomes law. If Cuomo’s administration is not prepared to address the legislation, sending the bill to his office for consideration could lead to its demise, he said. The governor can also at any time call to his desk a bill that has passed both houses.

“It is a shared decision when a bill gets sent to the governor. If it gets sent prematurely before the governor’s office wants it, we’re putting the bill at risk of being vetoed just for procedural reasons and we don’t want to have that happen,” Cahill warned.

“But in this case we are very anxious for this bill to get before the governor, to be on his desk and get his signature so we can start to have people’s votes counted when they should be,” added the member of the Assembly, which was the house to first pass the affidavit bill.