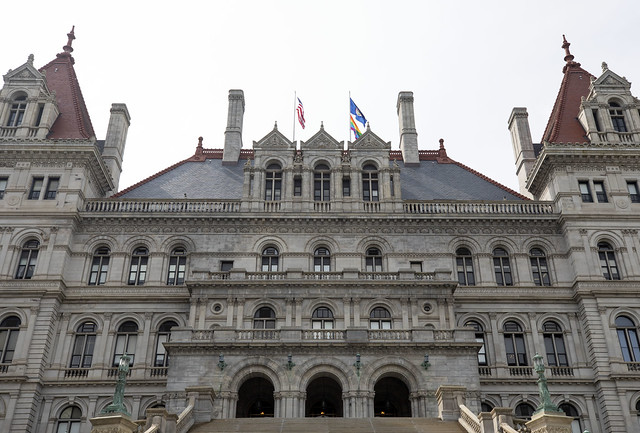 New York State government leaders are fond of appointing commissions, but those bodies are not known for meeting their deadlines. With those facts in mind, an advocacy group released a public letter Tuesday with an important message about governmental machinations that will significantly impact the state’s future.

With the 2020 Census around the corner, the League of Women Voters of New York State is urging the state Legislature to keep its eye on a key deadline that falls ahead of the all-important population count. By February 1, the state constitution mandates that the Legislature must appoint an “independent” commission that will draw district lines for Senate, Assembly, and congressional seats based on the census results.

The next round of redistricting is meant to be carried out by a new, untested Independent redistricting commission, which was approved by voters in a 2014 ballot referendum after being passed by the Legislature. The commission is meant to be largely immune from political influence to avoid drawing partisan districts, as was the case in the previous statewide redistricting. But, to ensure the commission does its job right, it needs sufficient funding and time to complete its work, said LWVNYS President Suzanne Stassevitch, in a letter sent on Tuesday to the state Legislature.

“The League of Women Voters of New York State believes that in order for this commission to fulfill its constitutional obligations, it must receive adequate funding from the state in the 2020-2021 fiscal budget year,” she wrote. That budget is due to be decided by April 1, but is largely determined by the governor’s executive budget, which is typically released in January.

New York’s representation in Congress and the carving and apportionment of legislative districts at the state and local levels are products of the census count. In the 2010 Census, New York’s population was acutely undercounted and the state lost one seat in the House of Representatives.

The subsequent redistricting, by a state Legislative task force, was considered particularly partisan when it came to the state Senate, strengthening rural and suburban representation, which tends to favor Republicans, and weakening the power of Democrat-leaning districts in New York City. Highly-gerrymandered and -disfigured districts can be found all over the state, with Senate districts designed to benefit Republicans and Assembly districts benefiting Democrats. It was adopted by a split Legislature, where Democrats held the Assembly and Republicans controlled the Senate, and ultimately approved by Governor Andrew Cuomo, a Democrat. Congressional districts were drawn by a judge-appointed special master after the Legislature could not come to an agreement on proposed maps.

At the same time, as the process faced broad criticism for its opacity and skewed results, the Legislature moved to amend the state constitution and provide for an independent commission to oversee the next redistricting. It was later approved by voters and must be created by February 1, 2020.

However, the state government doesn’t have the best reputation when it comes to meeting legally mandated deadlines. A separate commission – the New York State Complete Count Commission – that was meant to create a strategy for census outreach was only named months after its first report was due. The Legislature and governor then allocated $20 million in the April budget for that outreach, far short of what advocates and some legislators had sought. And the commission only submitted its report in early October and did not propose a plan for spending the money, which has yet to be released by Governor Cuomo’s budget office.

The governor has no say in naming the ten-member redistricting commission, which has strict criteria to ensure independence and a nonpartisan composition, though its design did fall short of what some reformers had sought.

Two members each are meant to be appointed by Democrats Senate Majority Leader Andrea Stewart-Cousins and Assembly Speaker Carl Heastie, and Republicans Senate Minority Leader John Flanagan and Assembly Minority Leader Brian Kolb. Those eight appointees will then, by a majority vote, choose two members who cannot be part of either major political party. The members, who will all be paid, will choose two co-executive directors, one each to represent Democrats and Republicans. The commission is required to hold at least 12 public meetings in counties across the state.

“We will absolutely fulfil our constitutional obligation and be represented on the Independent Redistricting Commission. While concerns over timeliness are certainly valid, the effectiveness of redistricting will be determined only if the Commission achieves true independence – something Albany has been sorely lacking in these types of endeavors,” said Assembly Minority Leader Kolb, in a statement through a spokesperson.

“If they follow the requirements the commissioners have to meet in order to be appointed, that will take us some way towards a less partisan group,” Stassevitch said in a brief phone interview. “And I think the level of transparency that is required with the public meetings, and also with the choices that can be made for commissioners, I think it's going to do a lot to open up the process to public scrutiny and allow a more robust conversation where it's needed.”

One major change from last time is full Democratic control of the Legislature. In this situation, the law creating the commission protects against one party wielding undue influence over the final district lines by requiring a two-thirds majority vote in each chamber to be adopted, instead of a simple majority.

Stassevitch was optimistic that the process will yield more equitable legislative districts. “The hope is that we can get the voters and the citizens and people in all of these districts at the center of this process instead of the politicians,” she said. “It was meant to be about the people, not about the politicians, and the politicians have had us, across the country in many instances, bamboozled into thinking otherwise for a long time.”

However, even though the commission will follow a nonpartisan process, its recommendations will not be binding. The Legislature could adopt its own plans after rejecting the commission’s proposed district lines twice. This next round will also be the first redistricting to take place after the United States Supreme Court invalidated parts of the Voting Rights Act, which mandated federal approval of redrawn districts in certain counties including Brooklyn, Manhattan and the Bronx.

A spokesperson for Flanagan acknowledged a request for comment but did not provide one. Spokespeople for Stewart-Cousins and Heastie did not respond to requests for comment.