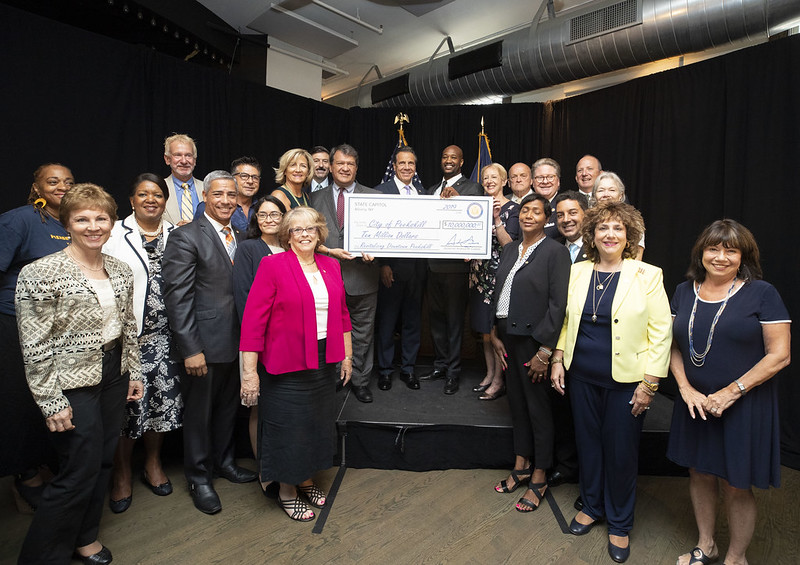 After months of uncertainty about the state’s commitment to the 2020 Census, and repeated exasperated pleas for funding from advocates and elected officials, Governor Andrew Cuomo on Tuesday announced that the state will devote up to the equivalent of $60 million in outreach efforts for the decennial population count. According to a press release from the governor’s office, Cuomo is directing state agencies to dedicate what amounts to roughly $40 million worth of Census activities, such as helping New Yorkers fill out the form, while also beginning the process of allocating $20 million earmarked in the state budget earlier this year toward contracts with groups that will drive participation in hard-to-count communities.

“Counting every New Yorker in the 2020 Census is critical to ensuring we are accurately represented in Congress and receive the federal funding we deserve," Cuomo said in a statement. “While the federal government has thrown up road block after road block – spreading fear among immigrant communities in the process – in New York we will break through and make sure that even our most difficult to reach communities are counted.”

As Cuomo intimated, the 2020 Census will come with its fair share of complexities. New York State is home to many hard-to-count populations including seniors, children under the age of 5, homeless people, public housing residents, and immigrants, particularly non-English speakers and undocumented residents. African-American communities are historically also often home to among the lowest participation rates on the Census.

The U.S. Census Bureau is also emphasizing digital responses, creating challenges for communities with little to no access to high-speed internet, and has less-than-adequate funding to hire enumerators who go door-to-door to count residents who do not self-respond to the Census. An unsuccessful two-year effort by the Trump administration to add a citizenship question to the Census questionnaire also generated fear and apprehension among immigrant communities, leaders of those communities say.

An undercount would have dire consequences for the state, not only reducing its share of many billions of dollars in federal funding but also its representation in Congress, along with myriad other adverse effects that would be felt for a decade.

Cuomo’s announcement was based on the report of the New York State Complete Count Commission, which was charged with crafting a strategy for the Census count and spent months soliciting input from experts and members of the public on how the state should spend the $20 million allocated in the state budget. Next week, the state will put out a Request for Expressions of Interest so nonprofits can apply for grants out of that funding pot.

In a surprise to advocates, Cuomo also declared Tuesday that $40 million in existing state agency resources would be committed to the endeavor. The effort will involve CUNY, SUNY, and agencies across state government including the Departments of Labor, Motor Vehicles, Agriculture and Markets; the offices of Mental Health, Alcohol and Substance Abuse, and People with Developmental Disabilities; Empire State Development; and the Division of Veterans Affairs.

Cuomo noted in his announcement, for instance, that the state labor department will help New Yorkers fill out the Census at all 96 of its career centers; SUNY and CUNY will ensure as many as possible of their 700,000 students are counted; and the DMV will display Census information at its 27 state-run district offices and 94 county-run field offices, along with emailing 4 million New Yorkers in its database.

The state has precious little time to put thought into action. The Census count officially begins in March and the U.S. Census Bureau has begun to release the logistical details of the process, including a Monday announcement of areas where households in hard-to-count regions will receive paper questionnaires even amid the emphasis on digital responses.

Meanwhile, New York City has spent months preparing a multi-pronged approach to the various obstacles presented by the Census, with $40 million of its own provided together by Mayor Bill de Blasio and the New York City Council. The city has created neighborhood coordinating committees, is recruiting hundreds of volunteers, engaging city agencies and local businesses, and will launch a large media campaign in January.

The state, on the other hand, had taken few steps until now. The New York State Complete Count Commission was delayed in being named and creating its strategy. The Commission’s report identified challenges and proposed solutions that were already known to advocates who say their only impediment was a lack of funds. Cuomo’s announcement on Monday was welcome news to them.

“Time is of the essence. The official Census 2020 release is just a few months away. It is imperative that we have an expeditious process for awarding the money allocated for the community based organizations that are on the frontlines,” said Esmeralda Simmons, executive director of the Center for Law and Social Justice at Medgar Evers College, in a statement.

Simmons was on the state Census commission and is a member of New York Counts 2020, a statewide coalition of advocates, nonprofit organizations and business groups that are working on an accurate census count. “Those groups, which engage directly with the community, are the trusted voices who are best able to underscore the importance of filling out the census and being counted. These are the organizations that will help make the difference and ensure that vulnerable 'hard to count' communities are fully represented in the census,” Simmons added.

“This is much needed and overdue,” said State Senator Zellnor Myrie, who has been outspoken about the need for Cuomo to move ahead on Census preparation, in a Tuesday statement. Myrie did issue a word of caution: “[A]s always, the devil is in the details. It is still unclear to us whether historically under-counted communities, like Brooklyn, will receive a proportion of the funding that is commensurate with their unique need and, whether that funding will be dispersed as expeditiously as possible given how close the census is.”