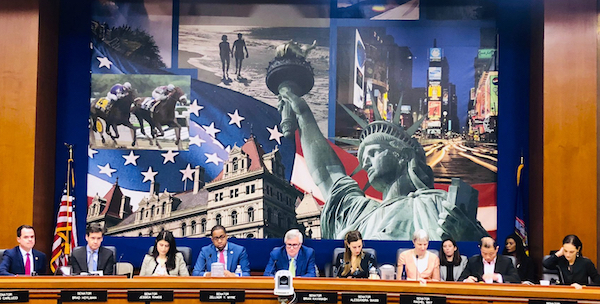 A state commission charged with creating a system of public financing for state elections has prompted harsh rebukes from several state legislators for proposing what they say is watered down campaign finance reform and for ostensibly advancing a political agenda that targets longtime critics of Governor Andrew Cuomo.

The New York State Public Campaign Financing Commission was appointed by Cuomo and state legislative leaders after a failure of consensus on overhauling the state’s campaign finance system. It was tasked in state law to create a public campaign finance system and, per Cuomo’s goals, to examine political party qualifications.

But the system proposed by the commission, in its final vote on Monday, fell short of the expectations of advocates and reform-minded legislators. Though it voted to reduce contribution limits across the board for statewide and legislative seats, candidates will still be able to raise vast amounts of private money for elections. For instance, the limits for statewide candidates were reduced from about $70,000 to $18,000 for a full election cycle. But that is more than three times higher than the $5,400 that a candidate for president can raise in a cycle.

Unless the state Legislature returns to amend the commission’s recommendations within three weeks, the system will be adopted. The Legislature could, however, choose to pass new campaign finance laws and tweak the program in the next legislative session, which begins in January.

The commission also approved a higher threshold for parties to obtain a ballot line, increasing it from 50,000 votes in a gubernatorial election to 130,000 votes every two years, and increased the ballot petition signature requirement for statewide candidates from 15,000 to 45,000. To observers, the ballot threshold change in particular seemed intended to kneecap third parties like the Working Families, Conservative, and Green Parties and appeared to be carried out at the behest of Cuomo, who has feuded with the WFP for years. But that controversial mission was also carried out with at least the acquiescence, if not full support, of Assembly Speaker Carl Heastie and Senate Majority Leader Andrea Stewart-Cousins, both Democrats, as is Cuomo.

Yet several Democratic Assembly members and Senators from New York City were displeased by the recommendations the commission made and the process through which its work was carried out over the last several months and quickly made their concerns known.

Queens Senator Jessica Ramos, a progressive elected last year with support from the WFP, took to Twitter to air her criticism of the commission’s proposals, as did other legislators. “We worked HARD last session to fix NY’s broken electoral system. We made it easier to vote & got closer to a people-powered government. The Public Finance Commission's vote is a disservice to our democracy & will eliminate @NYWFP. We need to engage more voters, not limit them!,” she tweeted.

Senator Julia Salazar of Brooklyn tweeted, “This is shamefully undemocratic. We need to act swiftly in the legislature to reject it.”

Brooklyn Assemblymember Walter Mosley tweeted that the party qualification issue should never have been on the commission’s agenda. “Third parties are an essential part of the electoral system in New York, shining light on important issues that otherwise may not get the attention they deserve,” he wrote, calling the proposals “unacceptable” and promising to oppose an increase in the threshold for ballot access. “We should be making it easier for third parties to make it on the ballot, not harder,” he wrote.

In a series of tweets, Assemblymember Bobby Carroll of Brooklyn cited his “no” vote on this year’s state budget deal because of the inclusion of the “poison pill” provision on the state campaign financing commission. “I have said it from the beginning that this commission was rotten! Now we just know how rotten,” he tweeted. “This isn’t a public matching program this is a farce. The legislture (sic) needs to take back control.”

Bronx State Senator Alessandra Biaggi has repeatedly let her disappointment be known. She credited the commissioners for their service but said she does not like the product, writing in part, "The Commission was created to put forth a plan that empowers everyday NYers & reduces the influence of money in our politics – the existing proposal only scratches the surface in achieving that aim, failing to significantly lower contribution limits." Biaggi also cited a "political agenda" at play in the attempt to "increase barriers for third parties."

"This proposal is half-baked & does not reflect the vision of the NYer who testified at the Commission’s hearings, & who raised their voices throughout this entire process," Biaggi continued. "The Legislature now has the responsibility to fulfill our promise to the people and get the job done."

In a phone interview, Bronx Senator Gustavo Rivera reiterated his call for the Legislature to vote on a “clean bill” on campaign finance reform. “I'm terribly disappointed, but I'm certainly not shocked,” he said of the commission’s recommendations.

Rivera blamed the governor’s machinations for derailing the process. “The governor, sadly, does not really care about establishing a campaign finance system. All he cares about is getting even with the folks who are his political rivals. That is his M.O.,” he said.

The “pièce de résistance” he said, was the ballot access threshold requirement, “which is ultimately, with a wink and a nod, trying to get rid of the WFP, which is really what this was about from the beginning.”

“The overwhelming majority of people made it very clear that they should create a campaign finance system that actually tries to at least minimize the impact of big money but that they should steer away from third parties, from fusion voting altogether. All those folks were ignored,” he said.

It’s unclear whether legislative leaders have any intention to support the idea of modifying the binding proposals. Assembly Speaker Heastie’s appointees on the commission generally went along with Cuomo’s appointees, while those commissioners appointed by Senate Majority Leader Stewart-Cousins tended to break from the pack.

Heastie’s office did not return a request for comment about the commission’s plan. Carolina Rodriguez, a spokesperson for Stewart-Cousins, referred Gotham Gazette to comments the senator made in a November 22 interview with WXXI News’ Karen DeWitt. “I’m not trying to destroy parties or make it impossible,” Stewart-Cousins said. “I definitely know, however, that we must reform our campaign finance (system).” She said she would prefer the party conversation to be separate from the campaign finance one, but also seemed open to legislative tweaks come January.

A spokesperson for Senator Mike Gianaris, the deputy majority leader, acknowledged a request for comment but did not provide one by publishing time. Senator Liz Krueger’s office did not respond to a request for comment. Jonathan Timm, a spokesperson for Senator Zellnor Myrie, declined additional comment until the commission’s recommendations are formally released. “Senator Myrie has made clear his support for public financing of campaigns, lowering contribution limits, and keeping the commission's hands out of fusion voting (which he stated explicitly in his testimony to the commission),” Timm wrote in an email.

The WFP itself appeared to threaten primary challenges against legislators who fall in line behind the governor’s “power grab.” “Instead of designing a strong system of public financing of elections, this commission has designed a weak one, as a cover for a politically motivated attack on the Working Families Party,” Bill Lipton, WFP director, said in a Monday statement.

He added, “Our opponents believe they can kill us. They are wrong. We will bring the full power of the WFP and our allies to bear in 2020 challenging those who block progressive change and electing the next generation of progressive leaders. We will build the biggest WFP GOTV operation yet to meet these new thresholds. And we will win.”

“If New York Assemblymembers don't speak up about and act to stop this public financing commission, they will be primaried with some amazing, energetic, democratic candidates. We are ready to go,” tweeted Fordham Law professor Zephyr Teachout, who ran against Cuomo in the Democratic primary in 2014, last year sought the Democratic primary nomination for attorney general, and is something of an inspirational leader for the New York left.

At a media gaggle on Tuesday, Cuomo downplayed the changes made to ballot thresholds while praising the commission. “I think the commission was charged with a very difficult task, which was to reform the campaign finance system,” he said. “I have to read the full report, I haven’t done it yet, but they made a number of inarguably great and dramatic reforms.”

He said the state shouldn’t be doling out public funds to political parties “without accountability and responsibility.”

This article has been updated with additional comments from legislators.