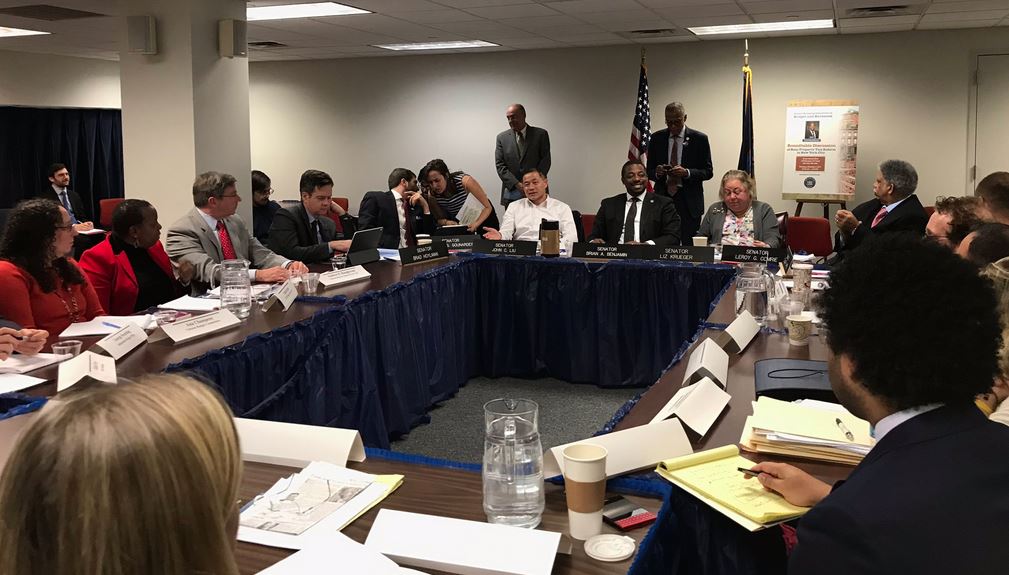 A roomful of top experts on New York’s property tax system -- an opaque topic that nonetheless touches every New Yorker, property-owner or not -- gathered for a roundtable discussion convened by state lawmakers Wednesday in downtown Manhattan. They were assembled at the hearing by State Senator Brian Benjamin, a Manhattan Democrat and chair of the Senate’s budget and revenues committee, to discuss solutions to the antiquated and unequal levy system that many want to see tackled in 2020, however overdue the action would be.

The issue has been a political “hot potato,” to use one lawmaker’s words, since the current property tax system was established through state law 40 years ago. Lawmakers, analysts, property owners, and others are now looking ahead to the next legislative session in Albany, which begins in early January, where a number of the issues raised Wednesday are promised to be on the table.

“What I have found so far as chair of this committee...is that the real property tax system is confusing, it’s complicated, and it’s not entirely fair,” said Benjamin, in opening remarks. The roundtable Wednesday followed a series of six public forums held by Benjamin’s office in all five boroughs over the past three months.

“The system as it currently exists was a temporary fix that was quickly outdated...Another bandaid or patch, in my opinion, will not fix this system. This system is broken at its core,” he said.

Wednesday’s conversation, which included economists, lawyers, and tax policy veterans, also unfolds in the context of a lawsuit challenging the system on the grounds that it imposes taxes disproportionately without regard to true market value -- a case that has the potential to drastically shake-up the property tax landscape.

At the same time, interested parties are awaiting the final report of an advisory commission established by city officials to comprehensively examine the entire system and make recommendations. The commission’s report, which was promised this year, would undoubtedly have implications for state legislators going into session in January. Wednesday’s roundtable was a kind of parallel effort by Benjamin to ready his committee for the technical and political heavy lifting it will face next year.

Other senators present Wednesday, all Democrats, included Liz Krueger, Leroy Comrie, Brad Hoylman, Robert Jackson, Zellnor Myrie, Andrew Gounardes, and John Liu, the former New York City Comptroller. For those legislators, in all but Comrie’s district in Queens, the effective tax rate on small owner-occupied homes is below the citywide average, according to an analysis of FY 2017 data by Tax Equity Now.

“This is by far one of the biggest issues I hear from my constituents,” said Gounardes, who represents parts of southern Brooklyn.

Among the biggest problems facing the state’s troubled system is that owners of similar properties can pay drastically different taxes. A 2018 study by the Citizens Budget Commission found that homeowners in the Bronx and Staten Island pay a higher percentage of the market value of their homes than they would in other boroughs, even though their homes tend to be worth less.

Another is the differential assessment formula used for different classifications of property, a vestige of the politically fraught landscape that created the current system, which now means the owners of some of the city’s most expensive co-ops and condos pay among the lowest real estate taxes.

The arithmetic used to levy taxes is complex. It involves four classes of property, each of which is valued differently and taxed on a different percentage of that value. To complicate matters, the rate at which the assessed value can climb in each property class is uniquely capped. Over time, the caps can lead to tax rates that lag behind the growth in market value, especially in booming neighborhoods.

Adding to the opacity of the system is a regime of abatements, rebates, and exemptions that obfuscate the logic behind a particular tax rate.

“The problem with the property tax is...nobody understands it, but nobody thinks they’re benefiting from it either. You have a really crazy system if nobody is actually patting themselves on the back and saying, ‘Wow, I’m getting away with paying much less,’” said Martha Stark, the former commissioner of the Department of Finance under Mayor Michael Bloomberg. Stark is the policy director of Tax Equity Now, the group that brought the lawsuit against the city and state.

That case survived motions to dismiss by both the city and the state, which are now appealing the lower court’s determination. Stark said the courts could decide whether the suit can move forward in as little as a matter of weeks.

While it may be months before the lawsuit is resolved, officials say the city’s advisory commission may be coming out with its report soon, though no timeline has been provided.

In a statement to Gotham Gazette, Marc Shaw, chair of the commission and senior advisor at the CUNY Institute on State and Local Governance, wrote, “This is an enormously important issue for our city, and we want to get this right. We have made significant progress on the majority of the issues we believe are needed for reform, but a few do remain. Those issues need to be resolved before we release any report. We expect to have a preliminary report out soon for the public to review.”

A spokesperson for Mayor Bill de Blasio, who signed the executive order creating the commission, said the administration does not have an update on the commission’s status.

Many of the experts in the room agreed that a starting point for reform should be that each class’s baseline assessment be a property’s market price, which in some cases is estimated based on sales of similar properties. Under the state’s current assessment methodology that is not always the case.

For the past four decades, the state has placed 1-, 2-, and 3-family homes in Class 1, where their assessed values are based on the sales price of the property. By contrast, larger residential buildings fall into Class 2, where they are valued based on the annual income they receive in rent. But co-ops and condos, which are often owner-occupied and comprise some of the city’s most expensive properties, also fall into Class 2. As a result, it is not uncommon for a co-op that sold in the millions to be valued at a few hundred-thousand dollars or less, based on estimates of so-called “comparable” apartments nearby. (A number of experts said Wednesday that the way the city identifies comparable apartments is also flawed, at times going far afield to find them without adjusting for variables like the differing land values in a region or whether they have comparable amenities.)

Complicating the politics further is the fact that in many areas incomes have not kept pace with the market value growth of property. That means people who purchased homes when prices were low often struggle to keep up with property taxes when neighborhoods gentrify. Several of the state senators present, all of whom represented districts in New York City, expressed concern that moving to a fully market-based system could mean some long-term homeowners will see a sudden rise in property taxes so great they would not be able to keep their homes.

“When I say the system should be based on market value, the starting point should be a real market value that people recognize. How one then decides what taxes someone is going to pay is very, very different. If you want to consider a person’s income afterward you could do that,” said Stark, responding to the concerns.

Jeff Golkin, a veteran property tax lawyer, warned against making changes too quickly, especially in real estate where the return on investment is often registered in the long-term. “You can’t take away rights that people have now. You can’t take people who are protected now and throw them into the fire,” he said, “...so change has to be done in a transitional grandfathering type of mechanism.”

Another issue is the size of the levy after a property’s value is determined. While state law dictates the tax assessment, the city controls the tax rate.

Roughly a third of the city’s budget comes from real estate taxes, the single largest revenue stream. Since fiscal year 2009, City Hall has kept the tax rate frozen, but rising market values and annual reassessments have allowed revenue from property taxes to increase year over year. The city’s advisory commission, created jointly by Mayor Bill de Blasio and Council Speaker Corey Johnson, was mandated to make recommendations to reform the system without diminishing the revenue it generates.

One analysis found that under Bloomberg the city budget rose 31.6 percent above inflation. In 2002, his first year in office and as the city was reeling from the effects of the 2001 terror attacks, Bloomberg raised the property tax rate by 18.5 percent. Since de Blasio took office, the city budget has grown over $20 billion.

“At some point you can’t keep burdening folks who can’t pay. Most people in my district are on fixed income, they’re not getting Wall Street bonuses every year,” he said.

Senator Krueger summarized the feelings of many of her constituents. “Please God, give us a system that we can understand,” she said.