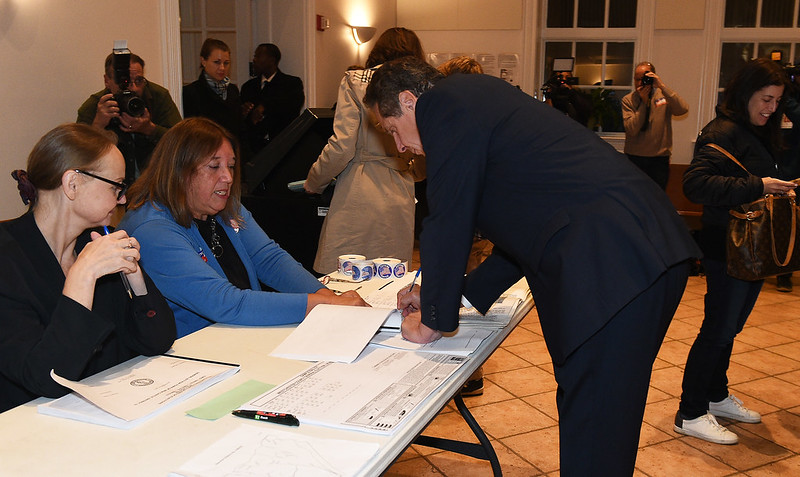 State lawmakers are poised to make a second attempt at launching the process to legalize automatic voter registration for eligible New Yorkers who interact with certain government agencies.

Mirroring the auspicious beginning of the 2019 session, which in the first weeks saw a historic spate of voting reforms passed by the new two-house Democratic majority, lawmakers say another package of election bills, including automatic voter registration (AVR), is likely to pass the State Senate as soon as Thursday, with an Assembly companion in the near future.

“We’re starting [Thursday] with a package of bills expanding on voter rights,” Senator Liz Krueger said Wednesday afternoon on the Max & Murphy podcast. “We did a whole package on improving access to voting and voter rights last year...we have more bills that we intend to pass relating to expanded access to voting and improvements in early voting.”

“We’ll be passing 9 or 10 bills,” Krueger said, “making sure that we have a system for automatic voter registration” and a variety of changes to early voting laws, including “exempting public schools from being early voting locations” given the burdens it can place on school facilities.

A press release from Governor Andrew Cuomo’s office outlining his 2020 agenda, sent just after his State of the State speech Wednesday, expressed support for automatic voter registration, claiming that it will improve registration and turnout rates and making additional commitments to make the program accessible through the internet. “We will ensure that all automatic voter registration opportunities are available online and we will enable New Yorkers to simply apply to register to vote on the State Board of Elections website if they choose to do so,” the press release said.

Voting reformers in New York have sought some form of automated voter registration for years but were stymied by a divided Legislature, particularly the Republican-controlled Senate majority. The Democratic takeover of the Senate won in 2019 allowed the chamber to pass an “opt-out” AVR system, where applications for services at designated state and local agencies -- like the Department of Motor Vehicles or the Department of Health -- would be integrated with voter registration forms, unless the service-seeker affirmatively declines to register.

Days before the end of the 2019 session, the Assembly, also controlled by Democrats, pulled its version of the bill due to an error in the language that meant people attempting to opt-out might be inadvertently opting in. In a joint statement in June, Senate Majority Leader Andrea Stewart-Cousins and Assembly Speaker Carl Heastie, promised to revisit the legislation in the next session.

“Due to a significant technical issue with the Automatic Voter Registration Act (S6457A /A8280A) that would have impacted the intent of the legislation, the Senate Majority will recall the bill and introduce a corrected version. We will pass this updated bill at the next available opportunity when we are in legislative session,” the statement read.

“It’s very simple. It was just a typographical error that provided the opposite instruction of what should have been in terms of how a form should have been filled out,” explained Deputy Majority Leader Michael Gianaris, a Queens Democrat and the bill’s Senate sponsor, in an interview Tuesday.

“We did make a commitment to pass it at the first available opportunity in the next session, this upcoming session,” he added. “Now you are hearing that we are true to our word and are, in fact, passing it.”

Legislative leaders were quick to tell the public that postponing the legislation until 2020 would not have an effect on its implementation date. “This action will not impact the implementation of this corrected legislation because, like the original legislation, it does not go into effect until 2021,” wrote Stewart-Cousins and Heastie in the June statement. However, the language of the bill provides a range of when it can go into effect, depending on when the State Board of Elections establishes the infrastructure to implement it, with a deadline of two years after it becomes law. If the bill passes both houses of the Legislature this year and is not signed by the governor until the end-of-the-year deadline, AVR may not be implemented until December 2022, after the next statewide election.

Reformers believe automating registration and other voting changes will make it easier to participate in elections, especially for people who have been historically disengaged from the democratic process. Combining agency service applications with voter registration forms means individuals will have to provide the necessary personal information -- like name and address -- only once. Under an “opt-out” system, service recipients have to take affirmative action only when they are choosing not to register to vote or when they want to be affiliated with a particular political party for the purposes of voting in a primary -- all of which will be possible on the integrated form.

The government agency that interfaces with a potential voter is responsible for submitting the registration form to the State Board of Elections, which then transmits the form to local election administrators.

During debates over the bill, immigration advocates and critics alike expressed concern that an AVR system would capture people ineligible to vote, endangering people with precarious immigration statuses and enabling voter fraud. Those concerns were compounded when the state passed the Green Light law, which allows undocumented immigrants to apply for driver’s licenses and took effect toward the end of last year.

Lawmakers responded to those concerns in the original legislation by including safe harbor language that outlines a presumption of innocence for someone who fails to opt-out, even if they are ineligible to vote. The legislation also affirms that registering to vote automatically does not constitute a claim to citizenship, which could otherwise jeopardize an immigrant’s legal status.

“People who are not citizens should not be registering to vote, and we want to make sure the law does not accidentally create that scenario,” Gianaris said.

As Krueger said, the State Senate plans to pass a host of other voting reforms Thursday, a number of which build on the state’s new early voting system established in 2019, as first reported by NY1’s Zack Fink and the New York Daily News. The Assembly is expected to consider the package in the near future, according to the Daily News.

“The Senate Democratic Majority will rollout legislation empowering more New Yorkers to take advantage of early voting opportunities and exercise their Constitutional right to vote,” reads a Wednesday advisory, previewing a Thursday morning press conference to be led by Senate Majority Leader Andrea Stewart-Cousins, just before the Senate holds its second day of 2020 session. “These bills build on the historic voting reforms passed under the Senate Democratic Majority during the 2019 Legislative Session.”

A spokesperson for the Assembly sponsor of AVR said discussions in that chamber are happening. “Assemblywoman Walker is meeting with Assembly leadership regarding AVR and we are eagerly awaiting [its] passage,” wrote a spokesperson for Assembly Member Latrice Walker, a Brooklyn Democrat who is carrying the bill in the Assembly, in an email. Speaker Carl Heastie’s office did not respond to a request for comment.

The package the Senate appears poised to pass, possibly with the Assembly following suit, also includes changes to authorize counties to set up portable early voting sites, meaning local boards of elections may set up additional polling locations to serve hard-to-reach areas for a shorter span within the early voting period. Other bills expected to pass the Senate Thursday deal with the criteria for siting early voting locations, including one that bars the use of public schools -- a source of conflict during the first year of implementation. Others would require more public notice about elections and college campuses to have designated polling places.

“New York ranks among the bottom states in voter participation and our majority has made a concerted effort to go from among the worst to among the first in the country,” said Gianaris. “That’s why we did early voting, we’re moving towards same-day registration, we’re moving towards making it easier to vote by mail, and AVR is an important plank in a democracy agenda that is going to make it easier for more people to participate in the process.”