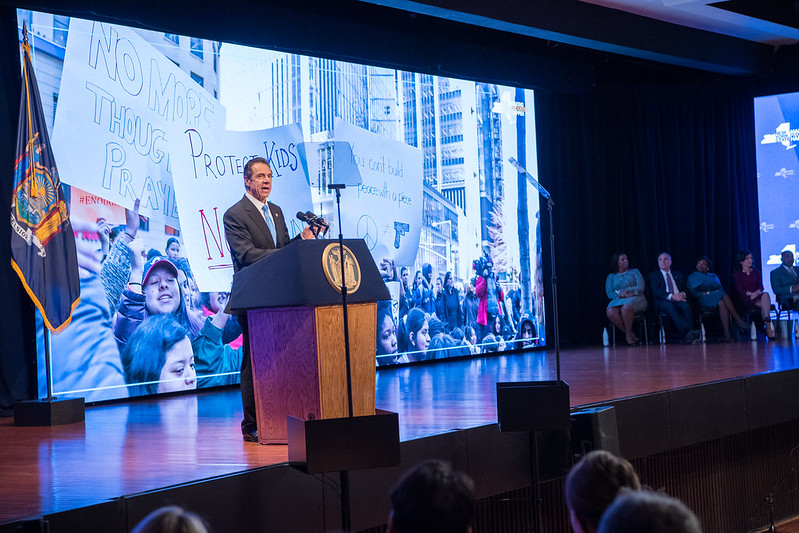 In his annual State of the State speech on Wednesday, Governor Andrew Cuomo was at times somber and sobering and, at others, impassioned and defiant as he laid out his legislative agenda for the 2020 session in Albany.

Speaking before elected and appointed officials, labor leaders, and others who gathered from across the state at the Empire State Plaza Convention Center in Albany, Cuomo admitted, “It is going to be a challenging year.” He took stock of the “frightening times” for the country and the world, pointing to the recent earthquakes in Puerto Rico, the devastation of wildfires in Australia, and the United States’ tense standoff with Iran.

But it was the situation at home in New York State that most troubled him, he said, as he bluntly addressed the increased divisiveness and hatred infecting politics, marked by a spate of anti-Semitic hate crimes that have gripped the state in recent months. He paid special tribute to the victims of an incident in Rockland County in December, where five Jewish people were attacked by a man with a machete at a Hanukkah gathering.

Prompted by the troubling trend, Cuomo reiterated his proposal for a new domestic terrorism law that would cover hate-motivated violence, while outlining additional measures of a multi-pronged response.

“Our ship of state is stronger than it has been in decades, but the ocean we navigate is as tempest tossed as we have seen,” Cuomo said. “Waves of anxiety, injustice and frustration are being fanned by winds of anger and division, creating a political and social superstorm, but these are the times when New York is called upon to show leadership and set a course for a troubled nation.”

Cuomo repeated some of the same beats from previous State of the State speeches as he took a victory lap over the sweeping progressive legislation passed last year under a Democrat-led Legislature for the first time during his now nine-plus years as governor. As he’s done before, he embraced the label of “pragmatic progressive” as he critiqued those who he said cannot back rhetoric with action, continuing his attempt to set himself apart from his ardent critics on the left.

“Progressive government by definition must be functional...Progressive government does not make promises it cannot fulfil,” he said, as he went on to detail broad progressive proposals of economic, racial, and social justice, along with his trademark commitments to fiscal moderation and his signature economic development programs, which have been the source of criticism from the left and the right.

Early in his speech, he said the state would launch a “nation-leading response to the transcendent threat” of climate change, as he proposed that New York would make major new commitments to improve the environment and bolster emergency response capacity. He announced the proposal of a $3 billion Restore Mother Nature bond act to fund preservation and resiliency efforts across the state, and made additional commitments to promote green energy infrastructure and the electric vehicle industry, as well as a proposed ban on single-use styrofoam products. The bond plan must be approved by voters this November in order to move ahead.

Along with new plans to tackle climate change, the governor went through a wide variety of proposals, some returning from last year, like the legalization of adult-use marijuana. He also made provocative comments about the two largest areas of state spending -- education aid and Medicaid -- that appear to set the table for intense negotiations as the governor prepares his executive budget, due by January 21.

It wasn’t until nearly an hour into his speech that Cuomo spoke of the especially pressing challenge facing the state budget: a $6.1 billion projected budget gap, largely stemming from an increase in Medicaid costs. But he said little about how he would tackle it other than providing a few initial breadcrumbs.

Cuomo said he would reconvene the Medicaid Redesign Team, which he first created in 2011 to control costs and restructure the state’s Medicaid program. But, as expected, he did not announce plans for new taxes or other measures to raise revenue. His executive budget will tell much more of the story about how the governor plans to close the gap.

Mayor Bill de Blasio, speaking to reporters after the speech, expressed some concern about how those health care savings would be achieved but said he would reserve final judgement until the governor releases a detailed proposal. "I am certain the state has some fiscal challenges. I respect that, but my first response is,  okay let’s all sit at the table and figure out how we can save money together and make sure that the common goal is to not take health services away from New Yorkers who need them," he said.

Cuomo did, on the other hand, propose cutting the corporate tax rate for small businesses from 6.5% to 4% and also touted the lowering of tax cuts for middle class families that had been enacted in 2016 and are continuing to go into effect this year. “Our middle class is our backbone. We have to keep working with them to keep them strong and this tax cut will do just that,” he said, seemingly promoting the cut as a new initiative as he has done each year.

In recent weeks, Cuomo had already unveiled more than 30 proposals, many of which he reiterated in his speech including new gun control bills, ending gender-based pricing discrimination, and closing the rape intoxication loophole, to name a few. He also revived unfinished business from last year’s session including legalizing recreational marijuana and ending the ban on gestational surrogacy.

The speech included several proposals geared towards improving the lives of working and low-income New Yorkers. He pledged to pursue new protections for workers in the gig economy, an issue he ignored last year after promising action in late 2018, but has become far more pertinent with about 40% of the state’s workforce employed in various relevant fields. “Too many corporations are increasing their profits at the expense of the employee and the taxpayer. That must end,” he said.

He also proposed expanding the state’s child tax credit, which he said would provide a $400 annual credit to about 400,000 families with children under the age of four. Additionally, he pushed an expansion of the Excelsior Scholarship that would provide free college tuition to families earning up to $150,000, from the current threshold of $125,000.

On K-12 local education funding, the governor seemed to suggest sweeping changes in how the state distributes aid to school districts, insisting that the current formula is severely flawed and not truly progressive in its approach to funding schools in lower-income communities. Pointing to a massive funding gap – on average, the richest district spend about $36,588 per student while the poorest district spend as little as $13,033, he said – he indicated pending action.

“The progressive path is clear: our state funds should be used to reduce funding disparities,” he said, potentially starting to set up a major debate in the coming months.

Cuomo made no mention of the bail reform debate that has been raging in recent months, with critics arguing the state must toughen sweeping changes made last year and Cuomo himself indicating earlier this week that changes need to be made.

Taking stock of the homelessness crisis across the state, Cuomo vowed to “take a giant step this year” to tackle the problem and build large swathes of affordable housing. “There is no policy or political debate to be had...We don’t need to reinvent the wheel. We just have to turn it. We know what works and we know what doesn’t work from experience,” he said, during his tenth State of the State speech and with reference to his decades working on the issue, from the nonprofit sector to his time as the federal housing secretary under President Bill Clinton.

In promising a massive infusion of funds to address the crisis he seemed to take a dig at New York City and Mayor de Blasio, as he insisted that investment must come with competent management by localities that receive it. The city accounts for nearly half the state’s population and has long been unable to significantly reduce homelessness despite varying attempts, though help from the state has been extremely limited, with Cuomo himself ending a state rental subsidy program early in his tenure and, more recently, opposing a bill, popular in both houses of the Legislature, called the Home Stability Support Act that would create a new state housing subsidy program to prevent homelessness or quickly end it for those receiving the benefit.

Responding to the governor's speech, de Blasio touted his administration's efforts and again noted that the governor offered no details. "I honestly want to understand the vision because I am glad he raised it but I didn’t hear a specific plan," the mayor told reporters. Instead, he said he was focused on advocating for the passage of the HSS Act, which "would have an immediate positive impact" on homelessness.

Building on the state’s heralded Paid Family Leave law, the governor advanced a paid sick leave proposal that would provide five days of paid leave for employees of small businesses and seven days for large businesses. New York City already has its own paid sick leave law, but Cuomo’s proposal would bring the benefit across the state.

He proposed several public health-related measures as well, including a crackdown on the sale of illegal cigarettes, new restrictions on vaping products and related advertisements, a ban on analogs of fentanyl, expanded access to Medication Assisted Treatment for those suffering from addiction, and drastically lowering prescription drug prices.

The governor also announced continuing economic development investments, a practice that he said have been successful, especially in saving the upstate economy, but fiscal watchdogs have criticized in the past for showing little return on investment. And he touted major infrastructure project proposals including the expansion of Penn Station in New York City and hundreds of millions for the redevelopment of the Erie Canal alongside the many ongoing projects that he has made a signature focus. He also touted the recently-passed $51 billion MTA capital plan.

Noting that New York passed a law to obtain President Donald Trump’s state tax returns, Cuomo also proposed the “Nothing to Hide” law, lest New York legislators be accused of being hypocrites. The bill would mandate that every elected official and state commissioner earning more than $100,000 a year would have to make their tax returns public. “Let New Yorkers know who is paying their officials, and who their representatives actually work for, because you can't serve two masters,” he said in the lone government ethics proposal of his remarks.

Cuomo ended his speech as he began it, with a passionate call to end the scourge of racism and tackle hate. He pledged increased resources to the state’s Hate Crimes Task Force, additional grants for security at schools and places of worship, and announced a plan to expand New York City’s Museum of Jewish Heritage on the Holocaust. He also called for the state schools curriculum to include lessons on civic values and religious diversity.

“New York can stem this ugly tide and calm the sea of division,” he said, unveiling a new state seal that would add the words, “E pluribus Unum,” out of many one.

“The ugly violence did not start in New York, but it must end in New York,” he said. “We know that unity is the only path forward.”

Note - this article has been updated with comments from Mayor Bill de Blasio.