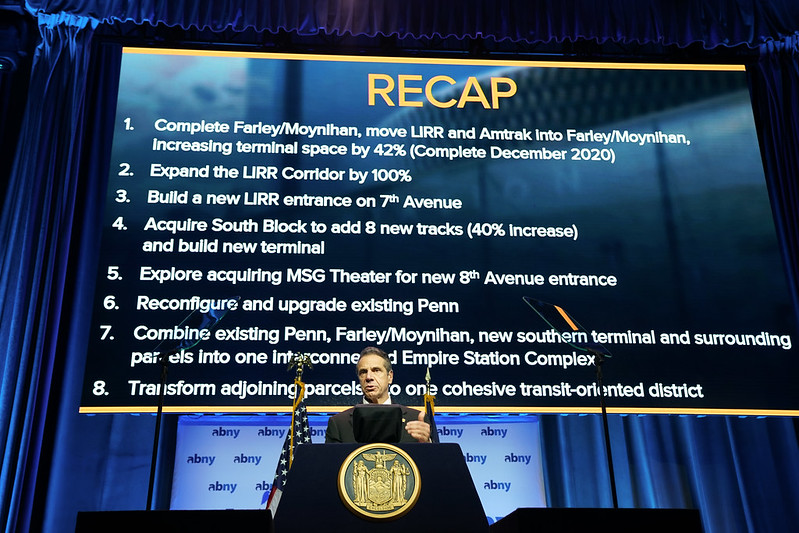 Governor Andrew Cuomo detailed much of his legislative agenda for the year at his State of the State speech on Wednesday in Albany, outlining various measures that, if enacted, could have wide-ranging impacts on New Yorkers. He gave only a nod, however, to the state’s fiscal picture, including an expected $6.1 billion budget gap for next fiscal year, which he’ll have to address in more detail when he presents his budget plan later this month.

The governor spoke of his top-line priorities – gun control, health care, workers protections, tax cuts and credits, and more – some of which he had already publicly released in the lead-up to the speech. But also notable are various proposals that he did not mention but are included in the 320-page policy book that accompanied his speech.

Below are 15 topics with proposals from the governor that he did not mention in his remarks:

Tax Relief Benefits
The state Earned Income Tax Credit can be worth as much as $8,682 for a family of two with three or more children and a combined annual income of $54,884. But filers often do not claim the benefit, which provides more than $1 billion each year to low-income taxpayers. Cuomo has proposed legislation to allow the state Department of Taxation and Finance to issue EITC checks to taxpayers even if they do not claim it. It would also not require them to amend their tax returns.

Assisting Minority- and Women-Owned Businesses
In the 2018-19 fiscal year, 29.13% of state contracts went to minority- and women-owned business enterprises (MWBEs), falling just short of a 30% goal set by the governor in 2014.

MWBEs often face administrative hurdles in obtaining business from the state and, as the policy book notes, there are several state entities with MWBE program and each has its own application and certification requirements. According to the policy book, the governor will direct Empire State Development’s Division of Minority and Women’s Business Development to create a centralized application portal as well as undertake other measures to ease the burden on MWBEs.

Targeting Robocalls
Robocalls can be a nuisance and also a tool for fraud and scams with elderly New Yorkers often falling prey to them. In response, the governor has proposed a three-part plan to end the menace by requiring telecom companies to block them, mandating that the companies implement additional call authentication mechanisms and imposing steep fines on companies that do not comply, as much as $100,000 a day.

Net Neutrality Protections
Under the Trump administration, the Federal Communications Commission (FCC) rolled back net neutrality policies that had been in place since 2015. Those policies had prevented internet service providers (ISPs) from throttling access or charging additional rates for online content.

In 2018, Cuomo signed an executive order to mandate that state agencies only contract with ISPs that follow net neutrality principles. In his policy book, he proposed codifying that executive order as well as legislation to “prevent the blocking, throttling and paid prioritization of online content — practices that undermine a free and open internet.”

The legislation would allow the Department of Public Service to investigate and fine ISPs that do not follow net neutrality rules. It would also allow consumers to pursue legal action against a company on those grounds.

Consumer Protections
Cuomo proposed a multi-pronged consumer protection agenda though he did not reference it in his speech. The proposals include giving state authorities additional enforcement powers in line with federal law; eliminating oversight exemptions for consumer financial products and services; changing the Financial Services Law to place oversight mandates on entities (such as virtual currency issuers) licensed under the law, similar to mandates on banks and insurance companies; and increasing fines under the state Insurance Law and Financial Services Law.

Women’s Equity
In his speech, Cuomo spoke of ending the so-called “pink tax,” a form of gender-based pricing discrimination that hurts women, and also pushed for ending the rape intoxication loophole. The policy book, however, contains a raft of other proposals aimed at promoting women’s equity.

-To address the abysmally low rate of women in corporate governance positions, Cuomo will instruct SUNY Empire State College to create a Women’s Corporate Leadership Academy, to both prepare women for executive and board positions as well as work with organizations to improve their gender representation.

-This year, according to the policy book, the governor’s Council on Women and Girls, Department of Financial Service, and Essence Communications Inc. will together organize a statewide program to examine how the student debt crisis particularly impacts women of color.

-In order to ensure that state and local authorities are complying with the state’s recently passed pay equity law, the state Authorities Budget Office will conduct a survey of all authorities to collect information on pay scales broken down by gender. Authorities where pay gaps exist will have six months to produce a plan to fix them.

-New York will launch a family planning program funded only by the state owing to changes to federal rules by the Trump administration that prevent federal funds from being used to aid organizations that provide abortions and other services.

-The state will invest $8 million over two years to continue combating maternal mortality and implement the recommendations of the Task Force on Maternal Mortality and Disparate Racial Outcomes.

Tackling Gender-Based Violence
The governor put forward a host of measures to reduce gender-based violence and provide services to survivors:

-Cuomo proposed a uniform standard of care for all hospitals when treating sexual assault survivors.

-The “Enough is Enough” law was passed in 2015 to prevent sexual violence on college campuses. Cuomo has proposed amending it to institute trainings “on healthy nightlife in college communities.” He will also direct the State Liquor Authority to include sexual violence prevention in its Alcohol Awareness Training Program curriculum.

-Cuomo also intends to put forward a bill that would require courts to take into consideration the effect of domestic violence when deciding on the distribution of assets in a divorce.
-Cuomo proposed allowing family courts to issue restraining orders without the petitioner having to prove that a family offense was committed.

-The governor made several proposals that specifically deal with gun violence, including allowing law enforcement to confiscate firearms from alleged abusers while they await prosecution and from the subject of a restraining order based on a domestic dispute. He also proposed creating a new category of domestic violence misdemeanor.

Immigrant Protections and Rights
The policy book notes that many New York statutes require individuals applying for occupational licenses to be citizens or green card holders, which excludes several categories of immigrants that are legally allowed to live and work in the country. Cuomo proposed removing that requirement by amending the Executive Law, General Business Law, and Real Property Law.

Cuomo also intends to move a bill that would codify an executive order he signed in 2011 that requires state agencies that interact with the public to provide interpretation and translation services to those with limited English proficiency.

Preventing Exploitation by Sexual Predators
Cuomo will introduce legislation that would update current law to require sex offenders to disclose all their social media accounts to the state Division of Criminal Justice Services. The amendment is aimed at closing a loophole and preventing predators from targeting people through dating apps, video game chats, and social media.

Police Surveillance
Touting License Plate Readers as an “invaluable tool” for the state police, Cuomo’s policy book said he will expand the current program and update it with the latest technology. It particularly cites the success of LPRs in catching the alleged suspect in the stabbing attack at a Hanukkah gathering in Monsey last month.

Students and Education
Cuomo proposed a new program that would allow school districts to apply for grants to provide mental health services to students and for schools with programs already operational to expand them.

The governor also proposed new legislation to make for-profit colleges more transparent in how they spend public funds. It would mandate them to report on, among other things, the salaries and bonuses paid to owners and executives.

Health Care Protections
A number of proposals in the policy book would reform access to health care and how the industry operates.

-Cuomo will order the Department of Health, the Department of Financial Services, and the state Digital and Media Services Center to build an online portal that allows individuals to access information on the cost of health care services and to educate them on their rights as a patient.

-The governor included several measures to curb the practice of surprise billing including expanding the current out of network billing law to prevent hospitals from directly charging patients for emergency services; requiring medical facilities to disclose their fees that are not covered by insurance; and shortening the statute of limitations for collecting unpaid medical debt from six years to three years.

Veterans Benefits
The governor made several commitments to veteran benefits in his policy book, including a $5 million investment in permanent supportive housing for homeless veterans; $1 million for veteran suicide prevention; a partnership between SUNY and ModernStates.org, a philanthropic organization, to pay the costs of exams for veterans and members of active-duty military families.

Cuomo also intends to propose legislation that would make it easier for New York State to build a State Veterans Cemetery.

Election Security
Cuomo proposed several election security measures recommended by the Cyber Security Advisory Board, which he convened in November. Among the measures he intends to advance is the creation of a Cyber Swat Team to work with local boards of elections. He will also direct the state and local BOEs to work with state agencies to prepare an emergency response plan for potential cyber attacks that may affect the 2020 elections.