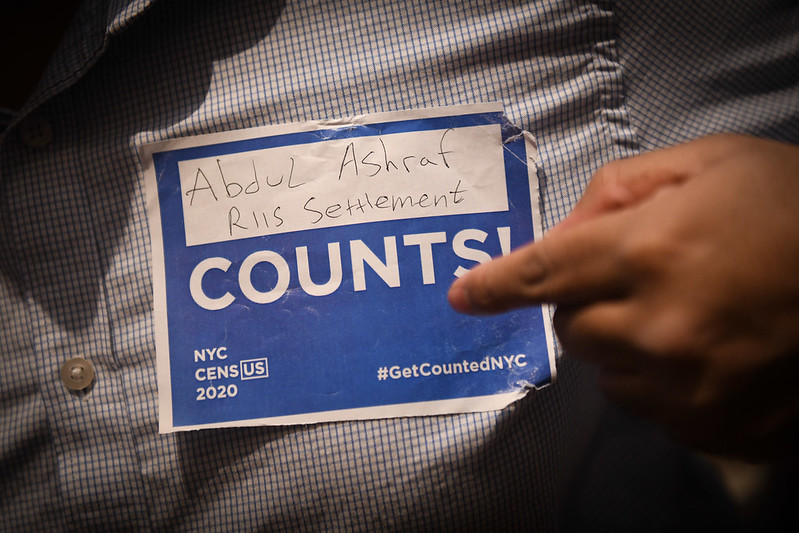 The House of Representatives Committee on Oversight and Reform held a hearing this past week with representatives of the U.S. Census Bureau to examine preparedness for the 2020 Census. Data collection for the Census count has already begun in remote parts of Alaska, some initial mailings will go out mid-March, and the full count officially begins across the country on April 1.

Exchanges at the Wednesday hearing, along with a report released just before it that informed much of the discussion, raised red flags around hiring efforts, cybersecurity, and ensuring hard-to-count communities will be counted.

The Government Accountability Office (GAO), an independent congressional watchdog agency, released a report on Wednesday morning that highlighted four main concerns that formed the basis for questions of U.S. Census Bureau Director Dr. Stephen Dillingham and others at the hearing: recruiting, partnerships, IT systems implementation, and cybersecurity.

The constitutionally-mandated population count that attempts to identify every resident of the United States occurs once every ten years and determines a great deal, including representation in government and federal funding, while influencing many other decisions.

Members of the House committee, chaired by Rep. Carolyn Maloney, a Democrat from New York City, expressed concerns around ensuring traditionally-undercounted areas, including rural parts of the country and communities of color, are properly counted, and how the fact that for this census the internet is for the first time the main collection mode would disadvantage certain communities, and what would be done to overcome those challenges.

According to the GAO report, the Census Bureau has been behind on its personnel recruiting goals since September of last year, which could lead to problems when the bureau must start contacting people who don’t fill out the census during the initial “self-response” period. The report warns that “if the Bureau does not recruit sufficient individuals, it may have difficulty hiring enough staff to complete its upcoming operations within scheduled time frames.”

In response to questions on that finding, Dillingham assured the committee that the bureau will be ready.

“The worst case scenario if our self-report rate drops to 55%, which no one expects, but if it did we would want 2.7 million people recruited, from which we would hire half a million people. The next scenario is 60.5%, which is probably the more reasoned scenario, in which case we would hire 320,000 people,” Dillingham said. “We will meet the worst scenario goal by the first week of March, and then we’re going to surpass it. There is no doubt. Right now we have about four applicants for every position”

Mihm expressed concerns that given the nature of the temporary workforce, the bureau can “bleed through the recruitment base rather quickly,” leaving it short staffed. Further, Mihm pointed out that while at a national level the numbers might look strong, the census is administered at a local level, making staffing at the Area Census Offices more concerning that 202 of 248 of the area offices “fell short of their individual recruiting targets as of February 2020”.

“I think the big concern that we have operationally is that these numbers can be looking good at a top level, even though we haven’t met some interim goals, but the concern is the response rate,” Mihm said. “The 60.5% is what they’re hoping to achieve, but even with that, we still have 61 million households for follow up. You can bleed through a recruitment base very very quickly in hiring the enumerators.”

Rep. Harley Rouda (D-CA) asked the witnesses what they were doing for all the people in the United States that don’t speak English, as there are over 500 languages spoken in the country. Frontenot emphasized that during the hiring process the bureau tries to identify and hire people from specific local communities who also speak languages that proliferate in those areas. When Rouda probed further specifically about languages spoken in smaller numbers, such as Navajo and native Hawaiian, Dillingham said that “the primary way we are going to reach those demographics are by hiring people from those local communities.”

“The national [hiring] figures are looking extremely good, and we are on track and on course with the national figures. But it is very important that we meet the needs of particular states and particular communities within those states,” Dillingham said. “If there are more recruitment efforts needed, we will make those efforts, we will advertise more, we can raise the pay rates in some instances.”

Applicants can apply for field or office positions in every state and Puerto Rico. Pay rates for the positions depend on the state; in Manhattan (New York County) the rates are $25-$28 per hour for office and “census taker” positions. In Bernalillo County, New Mexico, the rate is roughly $16 per hour.

The committee members were also concerned with the number of partnerships that the Census Bureau has successfully made in local communities so far. The GAO report reads that “as of early February 2020, the Bureau had almost 240,000 community partners, such as businesses and nonprofits, in place. However, the Bureau has missed interim goals building towards its overall goal of 300,000 community partners by March 2020.”

According to the 2020 Census website, partners can participate in the census by attending events, identifying areas in their own communities for outreach and promotional efforts, and spreading the word about the census.

Mihm, during his opening statement, testified that the bureau had not met its interim goals of developing these community partnerships, which are important to ensuring a full count and without which there is a lower response rate to the census.

“In the environment we are in now, the larger cultural environment is we need people to be encouraged to participate in the Census,” Mihm said. “This is what partnerships do, they are trusted voices in the community that can tell the community we need to participate, that it’s good for us, good for the community, and our data will be protected. That’s not something that can come out of Washington that has to come from trusted local voices. That’s the importance of local partnerships.”

The concern about local partnerships became a point of contention for many committee members. Debbie Wasserman Schultz (D-FL) brought up that the committee had requested a list of all the partners in each congressional district so far, giving the Census Bureau a deadline of December 13, 2019. As of the hearing, such a list had not been provided to the congressional committee. Wasserman Schultz pointedly asked Dillingham if she would get the list by Friday. Dillingham said the list is in a review process.

This list was brought up again by Rep. Mark Meadows (R-NC), who asked Dillingham to ask the people who were attending the hearing if they could get the list as soon as possible. After nods from the audience, Dillingham said, “I think I’ve got a firm ‘yes’ for you.”

Maloney mentioned the list of partnerships again in her closing remarks, calling the push for more information a strong “bipartisan exchange” and that the information is critically important to members of Congress to help get a complete count of their districts. Dillingham added at the end of the hearing that he “has been informed today during this hearing that we can make that list available” to Congress, although no specific date was specified.

As of Thursday, February 13th, Wasserman Schultz tweeted “democracy works only if minority communities count in #Census2020. But the @USCensusBureau will not even share who it’s community partners are. @OversightDems @HouseDemocrats @HispanicCaucus @TheBlackCaucus @CAPAC demand transparency to ensure we reach hard-to-count communities.”

An inquiry by Gotham Gazette to the press staff for Maloney’s Oversight Committee about whether the list has been turned over has not been returned.

Over the last two years, a key point of contention about the 2020 Census has been the potential addition of a citizenship question, which was sought by the Trump administration but struck down in court. While it wasn’t the focus of the hearing it was mentioned a number of times. Rep. Jim Jordan (R-OH) brought it up in his opening remarks, arguing that the Democrats focusing their attention on opposing the citizenship question pulled efforts from ensuring a successful census and that he “hopes today we can do away with the partisan theatrics and work together to make sure the census is complete.”

Rep. Alexandria Ocasio-Cortez (D-NY) asked Dillingham a series of direct questions confirming that the citizenship question is not on the census, that census information cannot be shared with the Department of Homeland Security, and that it will not be used in immigration enforcement. Dillingham confirmed that all of those statements are true.

Cybersecurity and implementation of the online version of the census were also focus issues at the hearing.

The GAO report says that the Census Bureau “continues to face significant cybersecurity challenges, including those related to addressing cybersecurity weaknesses in a timely manner, resolving cybersecurity recommendations from the Department of Homeland Security (DHS), and addressing numerous other cybersecurity concerns (such as protecting the privacy of respondent data).” The report is clear that the bureau has made steps to address these concerns, but that there is still work to be done.

Dillingham said the bureau has a “risk-management process to identify all our risks” and as they run continual tests on the system some are solved and others appear, but they are working their way through the list. Marinos added that the GAO appreciates how the bureau is responding to the risks but recommends that they do a better job at prioritizing the risks, beginning with those designated as high priority.

It is the first time in census history that the primary mode of data collection will be online, with many U.S. residents initially receiving a mailing with instructions for how to complete the form digitally. One of the major concerns of committee members was if the computer system is robust enough to handle the number of people that will try to access it. Marinos said during his opening statement that the original system the census was operating had delays, so the bureau has completely moved to its secondary system that “would present a better customer experience and could handle the volume a little better,” and that they build the system to accommodate more people than they anticipate actually participating.

The fact that the census is being rolled out digitally has caused concern about how rural and other communities with little or no broadband access will fare in participating in the count. The bureau representatives said there are three ways to fill out the census this year: by phone, internet, and paper. In communities that the bureau has identified as having limited internet access it is hiring larger numbers of enumerators to go door-to-door to engage respondents. Bureau reps also said it is instituting mobile questionnaire assistants who will do community outreach and be equipped to help people complete the census on paper or online.

“We have these mobile assistants who can go out into these communities and they help with the collection of information, and we have partners in those communities, like the American Library Association, etcetera,” Dillingham said. “We will work with them and wherever they identify that need we can respond to that need, and that’s why we have these mobile resource capabilities.”

The GAO report labelled the overall level of preparedness of the Census Bureau as “mixed” and the hearing indicated that is the case, but with officials assuring members of Congress that the bureau will meet its goals.