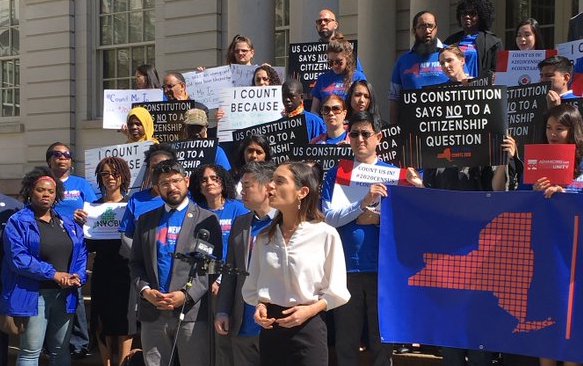 The U.S. Census Bureau will soon kick off the 2020 Census count by sending mail to households to inform them about filling out a questionnaire that lists their names, where they live and how many people live with them, their race and ethnicity, and other information. Self-response to the Census yields the most accurate information about households and given that New Yorkers speak more than 200 languages, Brooklyn State Senator Julia Salazar wants to take steps to ensure that as many people are guided toward participation in the most effective way possible.

The Senate recently passed a bill sponsored by Salazar, a Democrat, that would direct the New York Department of State to expand access to translation services to state agencies and institutions that interact with the public.

This year, the Census will largely be carried out through digital methodology, with the Census Bureau encouraging people to fill out the questionnaire online. That is expected to pose a particular challenge in communities that lack access to high-speed internet and among those with a limited ability to navigate an online form. The Census Bureau will provide translation through print and video guides for 59 non-English languages, which fails to capture the linguistic diversity of New York’s population, home to many hard-to-count communities of immigrants and people who either cannot speak English or have limited English proficiency, among others where response rates are often especially low.

Salazar’s bill would extend the state resources to localities, mandating that the Department of State identify translation services and make them available to state agencies and municipalities. The department would have to make best efforts to publicize the services, through online notices and in collaboration with organizations that work with limited or non-proficient English speakers, and it would also have to submit a report on its efforts next year.

Separate from state government, New York City officials have taken steps to ensure their own outreach effort is robust, providing $19 million in grants to community-based organizations, many of which work with immigrants on the ground on a day-to-day basis. It’s an effort to ensure that the city surpasses it’s self-response rate of 62% in the last Census (which was 14 percentage points below the national average at the time). Another $3 million in city funds is going to advertising in community and ethnic media to reach the widest possible audience in the city.

The state’s efforts, on the other hand, have been fairly lethargic. Governor Andrew Cuomo has pledged a roughly $70-million effort, of which about $20 million is for direct grants to organizations viewed as “trusted voices” that can conduct outreach in hard-to-count communities with a low-self response rate. The grants have yet to be awarded, and the rest of the funding is chalked up to the value of yet-to-be-seen operational plans for state agencies to contribute to ensuring a complete count. It’s unclear what, if any, of the funding is earmarked for a multilingual media campaign.

Salazar’s bill would fill in some of the apparent gaps, though it does not seem to have a companion bill in the Assembly and time is of the essence given the count officially begins April 1. Salazar seems hopeful, however, that the issue will be taken up quickly in the other chamber, particularly since Cuomo backs it, she said. “The prospect is that Assembly will move it quickly since it’s urgent, non-controversial, and has the Governor’s support,” Salazar said, in a statement through a spokesperson.

In her remarks on the Senate floor when the bill was passed, Salazar spoke of the “urgency” of ensuring that the Census is accessible. “All of us should be concerned about potentially losing congressional seats in our state but especially those of us whose communities are already underrepresented,” she said. “The action we’re taking today is necessary, given that over 113,000 New Yorkers speak a language at home that the Census Bureau does not provide language support for. Today, we’re choosing to do everything we responsibly can to count those people and to count nearly a quarter of all New Yorkers who did not respond to the last census in 2010.”