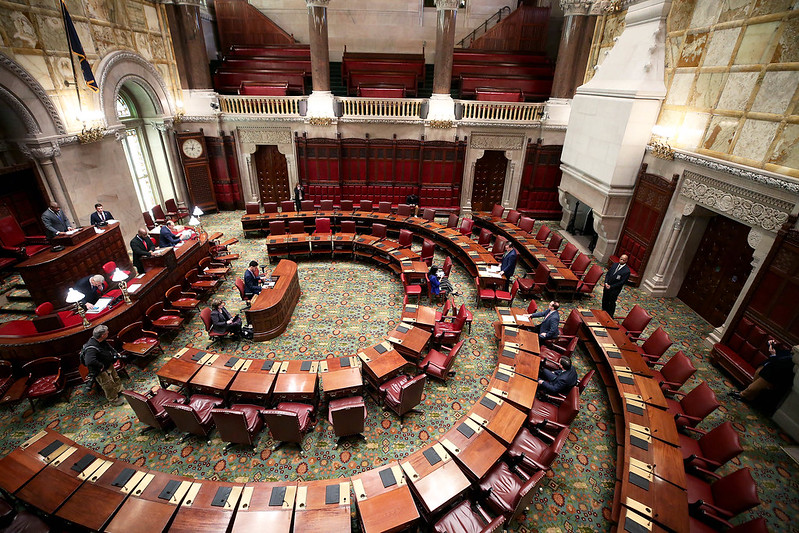 As New York has become the country’s epicenter of the global coronavirus pandemic, Governor Andrew Cuomo has stepped onto the national stage as New York's (and the region's) captain, coordinating the state's response to the outbreak with a profusion of executive orders and fireside chats from the State Capitol, streamed daily and with PowerPoint.

The governor has signed 11 executive orders, suspending dozens of laws, as he, his top aides, and public health officials respond to the most pressing needs presented by the emergency. He has been speaking regularly with President Trump and is leading a growing coalition of states in taking unified action to battle the novel coronavirus.

"I accept full responsibility," the governor said Friday when he signed a sweeping order to require all non-essential businesses statewide to close or stop having employees commute to work. "If someone is unhappy, somebody wants to blame someone, people complain about someone, blame me. There is no one else who is responsible for this decision."

While the Legislature retains some significant power in an emergency, like the ability to override any executive emergency decree, it so far has settled into a role of limited checks on Cuomo's executive power as the disaster unfolds. Few question the necessity of swift, resolute government during a crisis like the COVID-19 outbreak in New York. But some watchdogs note the legislative branch has become marginal in governing during the crisis, while much of the state's complex legal and regulatory framework is pushed aside.

The governor's emergency powers come from a set of statutes known as the Executive Law, which give Cuomo virtually unilateral discretion to modify or suspend any law or regulation in a disaster. At his request, the governor's power in such circumstances was recently expanded through legislation passed by the two Democratic majorities of the Legislature, along with a $40 million package to help him fight the virus.

"The governor has very broad power to set aside, modify provisions of state and local law in a disaster to address the disaster," said Evan Davis, senior counsel at the law firm Cleary Gottlieb and former counsel to Governor Mario Cuomo in the 1980s. "And the limit on that power is: the Legislature may terminate...anything that the governor has done."

"They do have an ability to pull the governor back, but whether or not they have the interest in doing so is another question entirely," said Blair Horner, executive director of the New York Public Interest Research Group (NYPIRG), a good government watchdog.

The reasons are complicated. The State Legislature is a huge, two-house, many-member body that operates on majority rule, and simply cannot act as quickly as the governor. Because of its congregational nature, its day-to-day operations have been profoundly disrupted by social distancing mandates (somewhat unique to the coronavirus, as opposed to a hurricane, terrorist attack, or many other emergency events). And the speed of new information about the outbreak and the number of new directives being issued by state, city, and federal officials daily is unprecedented in recent history.

On March 3, the Legislature passed and Cuomo quickly signed the bill freeing up $40 million in state funds to go toward emergency coronavirus management and amending the Executive Law to give the governor greater powers during an emergency, which will not expire until April 30, 2021, a move that has raised concerns among advocates like Horner.

The amended law gives Cuomo the power to suspend any law and authorizes him to issue "any directive" as long as it is "necessary to cope with the disaster." But the statute retains an important clause, which gives the Legislature power to terminate any order of the governor's through concurrent resolution. A majority vote in both chambers is sufficient to block any executive action.

"So it's sort of important that the Legislature stays open for business at the capacity to act, otherwise they lack all capacity to be a check on an absolute power by the chief executive," Davis said.

"Obviously you want to defer greatly to the chief executive in this kind of situation but absolute power is never a good idea," he added.

How exactly the Legislature "stays open for business" poses another challenge, with three lawmakers already testing positive for COVID-19, all in the Assembly, and activity in the chambers reduced to a trickle as government employees move mostly to remote work. Davis suggests the Legislature can use its termination power under the Executive Law as a check on Cuomo, to bring him to the table in setting the parameters for executive orders.

There is no provision in state law that requires the governor to give advance notice of executive orders to the Legislature, Davis noted.

"We are working closely with the Executive and the Assembly," wrote Gary Ginsburg, a spokesperson for the State Senate majority conference, by email. Spokespeople for Majority Leader Andrea Stewart-Cousins, Assembly Speaker Carl Heastie, and Cuomo (all Democrats) did not respond to inquiries about the nature of communication among the leaders around executive orders, or whether norms around their vetting are being established.

Legislators have returned to Albany to pass some key bills, including paid sick leave, doing so using a special new approach to social distancing while debating and voting in the chambers.

Having moved largely to tele-commuting and facing the pressures posed by the outbreak, Horner fears legislators may have also lost ground in negotiating the state budget, which is due April 1.

"The governor is in the driver's seat to begin with, the Legislature now really is not even in the front seat anymore. They've moved to the back seat when it comes to the budget," he said.

Budget negotiations are happening, and legislators may return to the capital this week, possibly to vote on a deal if one comes together. Cuomo has insisted that legislators should continue to travel to the capital to do their work and pass a budget before the April 1 deadline, which starts the new fiscal year. He’s also said he wants to include a variety of policy decisions in the budget deal, an annual Albany practice but where the governor is potentially able to exercise even more leverage this year.

"It's not like they haven't thought about the [Executive Law], they just passed an amendment to it a couple of weeks ago,” Horner said of legislators. “They are well aware of their powers, they are well aware they could put the brakes on the governor if they wished, and there's no evidence that they wished to do so.”