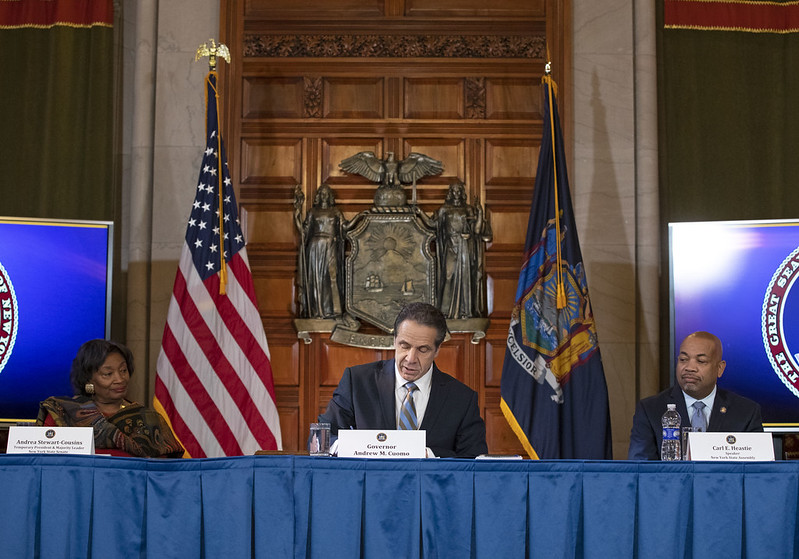 A new state campaign finance system, with public matching money for candidates who choose to participate and lower individual contribution limits, will be enshrined in law through inclusion in the new state budget. It is accompanied by new and highly-controversial ballot-threshold requirements for political parties.

Using a modified system due to the coronavirus outbreak, the state Legislature voted through various budget bills on Tuesday and into the late hours on Wednesday, meaning the spending plan is late given the April 1 start to the new fiscal year, as negotiations continued among the governor and legislative majorities.

The campaign finance system had already been approved last year based on the recommendations of a state-created commission but was struck down in mid-March by a supreme court judge who ruled that such a commission could not be tasked with writing laws.

Last year, despite mounting public pressure and their own promises to get it done, Governor Andrew Cuomo and the Democratic majorities in the state Legislature could not come to an agreement on a new campaign finance system including public matching of small donations and lowering New York’s sky-high contribution limits. They chose instead to punt that responsibility to the state Public Campaign Financing Commission, which was created in the budget.

After months of public hearings and expert testimony, the commission’s report was released and automatically became law in December, when the Legislature neither rejected nor amended it. But, the commission’s creation invited legal challenges from New York’s Working Families Party and Conservative Party, which saw it as a threat to the system of fusion voting that allows candidates to appear on a ballot with numerous party lines. One of those challenges succeeded when, on March 12, Niagara County Supreme Court Justice Ralph Boniello ruled that the commission’s powers were unconstitutional and that only the Legislature could create or change state law.

The budget bill approved on Wednesday addressed that mistake, and passed the same recommendations the commission had made. The law allows candidates for statewide office and the Legislature to opt in to a system of public financing that incentivizes small dollar donations by matching them with public funds. It’s similar to the system that has been used in New York City for over three decades.

The most controversial aspect of the new law is the change it makes to party thresholds and ballot access requirements, along the lines of what had minor party leaders concerned when the commission was created last year, and what led to immense uproar as the commission’s recommendations were released and temporarily became law.

Statewide candidates now have to get 45,000 signatures from voters to get on the ballot, up from 15,000. For an automatic ballot line, a party must receive at least 130,000 votes or 2% of the vote, whichever is higher, every two years in a gubernatorial or presidential election, up from 50,000 votes every four years in a gubernatorial election. These new thresholds also take effect immediately, while the new contribution limits and campaign financing system won’t take effect till after the November 2022 general election. As was true when the commission crafted its recommendations last year, many see the results as especially favorable to Cuomo, who has said he plans to run for reelection in 2022 and is well-known to raise immense sums from wealthy interests, and who has sought to diminish the Working Families Party that he has warred with.

Candidates will only be able to qualify for funding once, regardless of the number of ballot lines on which they run. The system will be based on dual thresholds. Candidates for governor will have to raise at least $500,000 in qualifying contributions from a minimum of 5,000 contributors; those running for lieutenant governor, attorney general and comptroller will have to raise $100,000 from at least 1,000 contributors. State Senate candidates need to show $12,000 in fundraising from a minimum of 150 donors, and Assembly candidates will need at least $6,000 from 75 donors.

The law creates a new State Campaign Finance Fund, but it makes no mention of how much money will be put towards the new system. The state commission-created law had set it at $100 million for a four-year election cycle. Funding will come from the state’s general tax revenues and from the abandoned property fund. State taxpayers can also choose to contribute to the fund when filing their taxes, and the fund can also receive private contributions. It will be overseen by the state comptroller and the state commissioner of taxation and finance.

The new system will be administered by a Public Campaign Finance Board within the state Board of Elections, made up of the four existing Board of Elections commissioners and three more appointed by the governor and the legislative leaders of the two main parties in both the Senate and Assembly.

The Working Families Party, which is among a handful of smaller parties that could see their automatic ballot lines at risk, reacted quickly and sternly.

"Governor Cuomo claims that now is not the time for politics — yet behind closed doors he is blocking voters from supporting minor parties and the values they stand for,” said Sochie Nnaemeka, state director of the New York Working Families Party, in a statement. “At a time when many Democrats are calling for fair and open elections, the Governor has made New York the most hostile state toward third parties in the entire nation. When he created a commission to wipe out third parties we sued and won. We feel as strongly now as we did then that the law is on our side — and we will win again in court."

Note - this article has been updated with details about the new campaign finance system including qualifying thresholds, maximum payments and the new state Campaign Finance Fund.