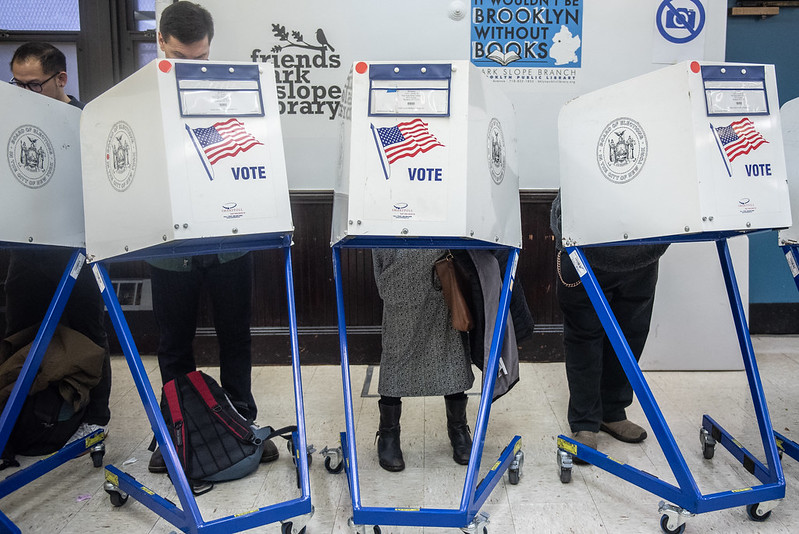 Amid reports that Governor Andrew Cuomo plans to allow or require voting by mail for all New Yorkers in primary and special elections set for June 23, government reform advocates have raised concerns that the measure could end up adversely affecting the election, while the State Republican Party has promised to sue if the governor follows through.

The coronavirus pandemic has forced several delays in the state’s election calendar and in-person voting may continue to be a risky endeavor in June when the state holds primaries for all the seats in the state legislature and House of Representatives, and possibly for the Democratic presidential nomination, as well as a handful of special elections. In lieu of that, according to a NY1 report on Monday that the governor’s office refuses to confirm or deny, Cuomo is expected to sign an executive order mandating that local Boards of Elections mail out ballots to all registered voters.

Such a measure by the governor would, in theory, help New Yorkers avoid the risk of exposure to the coronavirus while still exercising their right to vote. But with no details yet about the executive order, government reform advocates are anxious that the order could do more harm than good. Asked about the NY1 report, Cuomo spokesperson Caitlin Girouard said only, “We're looking at all options​.”

Cuomo had previously issued an order expanding absentee voting to all who decided to request such a ballot over fears of the virus and in-person voting.

Among the concerns from advocates about the possibility of full-on vote-by-mail are that the local BOEs may only mail ballots to active voters registered with political parties in the state, and miss the more than 970,000 ‘inactive’ voters who are nonetheless registered to vote with party affiliation. (In total, counting voters with no party affiliation, there are 11.7 million active and 1.2 million inactive voters in New York.) Mailed ballots would not make special accomodations for the visually impaired or be an effective substitute for translation services at poll sites. The ballots may also fail to reach the mass of New York residents who have chosen to shelter outside the state or populations like college students who are now living at home.

“We would love to be able to move to a vote-by-mail system in New York, but there are very significant obstacles to a wholesale transition,” said Susan Lerner, executive director of Common Cause New York, in a virtual news conference on Wednesday afternoon, insisting the the state should only take the step if it’s done in conjunction with in-person voting. “Unfortunately, jumping to an entire vote-by-mail system in New York state would be setting up our elections for failure.”

A majority of Americans, 58% in fact, support voting by mail, according to an NBC News/Wall Street Journal poll released Tuesday amid ongoing questions about what form this year’s presidential and other elections will take. But Lerner pointed out that effective vote-by-mail programs, like the ones used in Washington and Colorado, depend on accurate voter rolls, and that elections administrators in New York have been notoriously bad at maintaining their records. The most high profile example of that is the New York City Board of Elections, which illegally kicked 200,000 Democratic voters off its rolls ahead of the April 2016 presidential primary. Voters are often also improperly placed on inactive status, and the BOE may not send a ballot to those voters, who’ve been labeled ‘inactive’ after they fail to respond to a mailer from the BOE requesting confirmation of their current place of residence.

“If New York hastily Institutes a vote-by-mail system, hundreds of thousands of New Yorkers and the inactive, over 1 million voters, may never receive a ballot,” Lerner said, calling for an expansion of absentee ballots and doubling the number of early voting days from 9 to 18. The early voting period extends from June 13 to June 21. The city Board of Elections has yet to confirm early voting sites, which it is required to make public 45 days before the election, and there is no information on its website.

The solution is one that the governor has already undertaken, Lerner argued. On April 9, Cuomo signed an executive order that expanded the criteria for requesting an absentee ballot. Voters who are either ill from coronavirus or fear contracting it at the polls can now apply for an absentee ballot.

In the news conference led by Common Cause NY, Monica Bartley, community outreach organizer at The Center for Independence of the Disabled New York, pointed out that mailed ballots won’t be available in braille or large print, disenfranchising the visually-impaired. “It would be necessary for the state to provide accessible options for people with disabilities so that we can all vote and not be left out of the process,” she said.

Amy Torres, director of policy and advocacy at the Chinese-American Planning Council, warned against the “false choice between the health of voters and the health of our democracy.” She noted that immigrants with limited English proficiency could be accidentally disenfranchised, and called for “doubling down on the successful reforms like early voting, and expanding options like vote by mail so that our democracy is not only healthy during this time of crisis, but is stronger in the years ahead.”

Just as with immigrants, African-Americans could be particularly impacted in a full vote-by-mail system, said Lurie Favors, general counsel at the Center for Law and Social Justice at Medgar Evers College, CUNY. African-American communities have been disproportionately affected by the coronavirus, she pointed out, and would be hard-pressed to mobilize and educate voters about the changes to the election.

There were also operational concerns. A mail voting system would require the BOE to print and send out millions of pieces of mail, a herculean task for an agency often criticized for its inefficiency and that advocates say is underfunded for its mandate.

Mostly, the experts had questions that have yet to be answered by the governor’s office, but they broadly agreed that it’s too soon to implement voting by mail for the June primary. “Right now, in the middle of the pandemic, New Yorkers do not need to be experimenting with a complete overhaul of their elections against the advice of all experts,” Lerner said.

The June 23 election day is now just under two months away, with early voting set to kick off even sooner.

The New York Republican Party also shared some of the aforementioned concerns about a potential vote-by-mail program this week, but also worried that it could lead to fraudulent voting, though there is little evidence of that from other states. Nick Langworthy, chair of the New York GOP, said in a statement that such an executive order would be “an illegal and unconstitutional political power grab that will severely undermine the integrity of our elections.”

“Throughout this pandemic, I have worked in good faith with the Governor to make necessary adjustments to our electoral system to protect the safety of New Yorkers, but this executive action crosses a red line,” he added, responding to the NY1 report of Cuomo’s impending action that has still not materialized. “I have been willing to support a system that allows for all New Yorkers to use the threat of coronavirus to vote by absentee ballot, but automatically mailing ballots without proper security measures in place most certainly invites fraud.”

Though he referred to “numerous cases” of problems in a vote-by-mail system, he did not cite any specific examples. He also said he had spoken with elections commissioners across the state who oppose the measure and say it is impossible to conduct a vote-by-mail election, but he did not name them.

Among the issues he noted were ballots arriving late or going to the wrong address, more than one ballot being delivered and bins of ballots that were never delivered – which was apparently the case in the recent Wisconsin primaries where ballots were found after the election at a USPS processing center – and so-called “ballot harvesting'' where an individual collects absentee ballots from several people and delivers them. Collecting a ballot from a voter is not illegal in New York, where someone can be designated for the task by a voter. The only recent example of ballot harvesting fraud was in the 2018 midterms in North Carolina, where it is illegal, and involved a Republican operative who used the tactic to help a Republican congressional candidate.

Langworthy’s concerns echo those of Republicans across the country and even President Donald Trump, who has questioned efforts by several states to expand voting by mail and said it should not be considered for his reelection bid. “Mail ballots are a very dangerous thing for this country, because they're cheaters. They're fraudulent in many cases,” Trump said at a White House briefing after the primary election in Wisconsin, which was held with in-person voting despite the risks from the pandemic, though he did not cite evidence. In March, when Democrats were seeking funding to expand absentee and mail ballots in the federal stimulus package, Trump indicated vehement opposition to it based on politics, rather than principle. “The things they had in there were crazy,” he said in a Fox & Friends interview. “They had things — levels of voting that, if you ever agreed to it, you’d never have a Republican elected in this country again.” Neither Trump nor Langworthy seemed to take note that members of the military have voted by mail since the Civil War.

Should Governor Cuomo actually sign an executive order to implement the program, Langworthy said his party would file suit. “The ‘never let a crisis go to waste’ mentality has permeated the Governor’s office and Cuomo is using this pandemic as a reason to expand his powers and force his political agenda through,” he said. “If he goes forward with this, we will be prepared to legally challenge it at every level.”