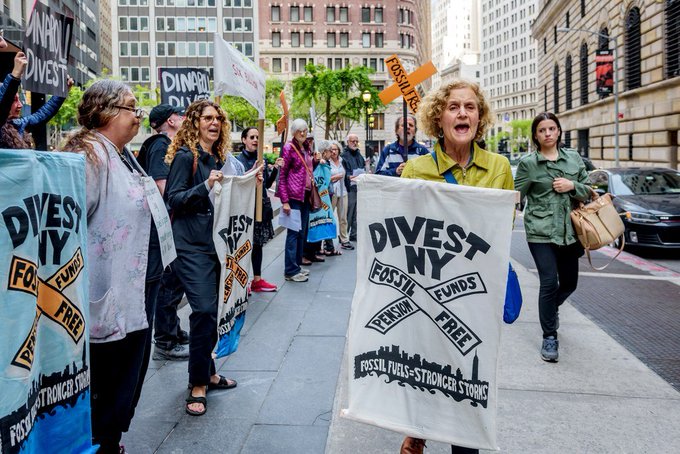 The oil and gas industries are experiencing significant upheaval as the coronavirus pandemic decimates economies across the globe. The price of crude oil in the United States temporarily fell below $0 per barrel for the first time ever last month, prompting renewed energy among activists and elected officials in New York who want to rid the state pension fund of all investments in the fossil fuel industry.

But the one person they must convince, State Comptroller Tom DiNapoli, has remained steadfast that the stocks remain good investments, though he's made a number of concessions, investing in more renewable energy companies and studying options around divestment.

In recent years, as the threat of climate change becomes evermore urgent and parts of the world have made moves away from fossil fuels, New York State has passed sweeping energy sector reforms and set goals and regulations to transition towards renewable sources of energy.

But the New York State Common Retirement Fund, the public pension fund for over a million current and retired New York employees, continues to invest heavily in fossil fuel company stocks. Currently worth $210.5 billion, the fund had more than $13 billion invested in fossil fuel companies at the end of March last year, according to an analysis by 350.org, an international climate change advocacy movement that has been at the forefront of the push to get public entities to divest from fossil fuels. The group’s report found that, in the last year, the pension fund has lost more than $1.5 billion in value in its investments in 16 oil and gas companies, a trend that they said is unlikely to be reversed even after the coronavirus pandemic passes.

As the sole custodian of the pension fund, Comptroller DiNapoli, a Democrat who has held the seat since 2007, has taken steps towards investments in fighting climate change through the pension fund. In June of last year, he released his Climate Action Plan, which aimed to double the pension fund’s investment in sustainable climate solutions from $10 billion to $20 billion over ten years, and to promote climate risk management and assessments in the companies under the pension portfolio, among other steps.

DiNapoli has resisted calls for divesting the fund from the fossil fuel industry, even as some New York City public pension officials have moved aggressively toward divestment. DiNapoli has consistently argued that fossil fuel industry investments continue to produce sound returns, satisfying his number one obligation to retirees, and that he can be an activist investor and push companies to adopt more environmentally beneficial policies.

“Climate’s a big issue and just selling stock in fossil fuel companies is not gonna solve it,” he said in a general election debate in 2018 when he was running for reelection. “[W]e have to go through a societal change and for now, in the short run, we still are making money from the oil and gas stocks.”

Even after the value of oil went negative in April, DiNapoli indicated no change in his approach. “Our position remains the same on divestment,” said Jennifer Freeman, a DiNapoli spokesperson, in an email. “Across the board, industries have been hurt by COVID-19. We continue to move forward on our Climate Action Plan. No developments that we'd comment on.”

DiNapoli’s arguments don’t hold water for activists, who point out that fossil fuels have been a bad financial investment for years overall. The fund’s investments in companies that use fracking to extract fossil fuels are also seen as particularly hypocritical in a state where the governor banned the practice five years ago and with the Legislature codified it into law in this year’s budget.

“Yes, divest for moral reasons, but my goodness, you really should be divesting for financial reasons,” said Mark Dunlea, co-founder of New York’s Green Party, who ran against DiNapoli in 2018 on the single issue of fossil fuel divestment.

“When you have world leaders saying, ‘We have to stop using fossil fuels, whether it's five years from now or 15 years from now’...That's not a viable business model moving forward,” he said about maintaining those investments.

In recent weeks, activists and elected officials have escalated their push for the Fossil Fuel Divestment Act, sponsored by Manhattan State Senator Liz Krueger and Brooklyn Assemblymember Felix Ortiz, both Democrats, that would require the comptroller to divest the pension fund from major oil, gas, and coal production companies over five years.

The New York Youth Climate Leaders, a statewide youth coalition, held a virtual lobby day on April 21 ahead of Earth Day, speaking with nearly 40 members of the Legislature in virtual and phone conferences. They blasted out to lawmakers and on social media a video that features pensioners and high school students supporting the divestment call.

Both Ortiz and Krueger have pledged to push for the bill’s passage in the limited time remaining in the Legislative session this year, though most legislation has been put on the backburner because of the pressing conditions imposed by the coronavirus outbreak.

“I think the timing cannot be better in these horrible circumstances,” said Assemblymember Ortiz, in a phone interview, noting that the adverse impacts of climate disproportionately harm communities of color. “A tough time can give us the opportunity to bring vision solutions...I think we need to make sure that we continue to move the ball forward and continue to embrace this conversation.”

The Senate version of the bill recently gained majority support in the chamber, with 33 sponsors; the Assembly version has 52 sponsors and would need 76 in total for a majority. Even Governor Andrew Cuomo has supported divestment since 2017, though Cuomo has not been especially vocal about divestment nor taken up the Divestment Act in his lengthy annual agendas. The governor has taken his own efforts to pursue similar measures by the parts of state government he controls, made the aforementioned fracking moves, and worked with the Legislature to pass the sweeping Climate Leadership and Community Protection Act.

Krueger said though the bill has not passed, there have been similar models followed in other jurisdictions. “So we are moving the world while we're perhaps not speeding ahead of the rest of the world,” she said in a phone interview. Just the discussions around the bill and the pension fund’s investment in “stranded assets” like oil and gas that are slowly losing value have been effective in pushing DiNapoli towards their goal, she said.

As Krueger noted, DiNapoli hasn’t completely ignored the advocacy efforts. In January of this year, DiNapoli announced that he would review whether 27 coal companies that the fund has invested in are moving towards more sustainable business models. “Investors who fail to face the risks and seize the opportunities presented by climate change put their portfolios in jeopardy,” DiNapoli said. “We are assessing minimum standards for transition readiness at coal mining companies first, because they face the greatest risk as the world turns to cleaner and renewable energies. If a particular company is not ready to move away from its reliance on thermal coal mining for profits, we may divest our holdings in that company.” The review was expected to last several months.

“I would say it's probably five years too late for the coal industry,” said Richard Brooks, campaign coordinator with 350.org, who otherwise praised the move. “But if he's going to continue to do these reviews, he needs to accelerate these reviews and do it across all of the energy sector.”

Krueger echoed Brooks’ urgency. “If you look at [DiNapoli’s] handling of our pension funds, you can't really say he's not paying attention to the issue. He just doesn't want the Legislature to be able to insert itself into what he defines as his authority,” she said. “And he thinks that he is moving us in exactly what direction we should be going. I don't disagree with him on the direction, I disagree with him on the speed at which we are getting there.”